In this interview I chat with actress
Clare Perkins. We discuss form and expression, rehearsals, voice work, and the impact of art, and more. 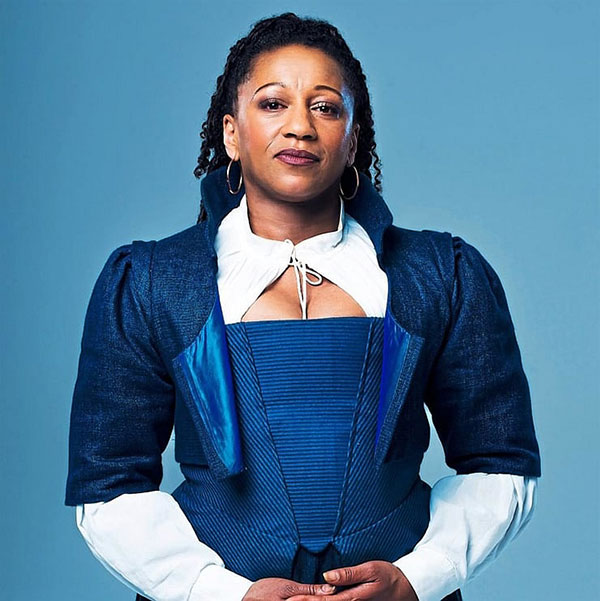 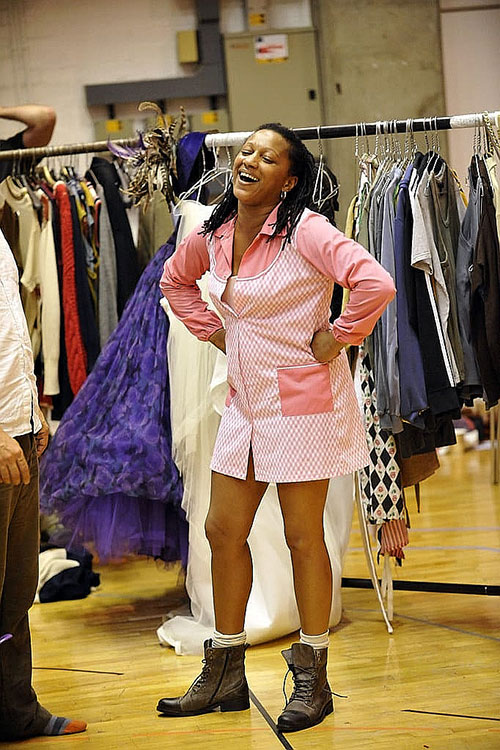 Clare has starred in theatre works like Emilia (above image), and Lynn Nottage’s Pulitzer Prize winning play Sweat. Clare was in Saul Dibb’s 2005 film Bullet Boy (Ashley Walters) and is in the BBC series Outlawz (2021/2022) available to watch on BBC iPlayer. I also recommend a piece of Clare’s work titled Chilling Out which was made in 1990 as part of the Everyman television series that ran on BBC.

“I think maybe many many years ago when I was growing up watching the news might have exercised your compassionate muscles but now there’s so much everyday, you know, it’s war zone, it’s a different refugees, it’s a different displacement of people, I think that our compassionate muscles get a bit mixed up with political views and whatever. But I think when you come to the theatre and the lights go down, everyone is concentrating on the stage. You see those characters, you watch that story and sometimes there can be a character you don’t particularly like that at some point during that story you might cry for that character, you might laugh for that character, or you may catch a glimpse of what has made that character become who they are. So in that way I think theatre exercises our compassionate muscles. I heard this thing that at certain moments in the theatre and don’t ask me who did this experiment, but that there are moments when people are watching a play when everybody’s heart beats in time. That’s such an amazing beautiful fact. I think in theatre you get a concentrated unified gaze from the audience which unifies the audience themselves”

How do you deal with pressure or stressful situations?
“I drink a glass of wine, I do yoga. It’s funny, when I was first acting, when I went to drama college I already had a child and then by the time I was 25 I had 3 kids so now when I feel stressed I’m like you’re not as stressed as you have been because before I would be learning my lines, dealing with the kids, my daughter’s got learning difficulties, so yeah trying to do everything, trying to get babysitters for when I was at the theatre or people to look after them when I went on tour, so now my life is much less stressful and also I don’t think that I’m that much of a stressy person. I’m the sort of person that gets up, has a cup of tea and sits around and reads a book for a couple of hours or cleaning the house. I live quite a stress free life”

How do you nurture and nourish your mind?
“Through reading. I’ve always been a reader. I always have a book in the bathroom, I’m always reading something, there’d be a book in my bag. If I go and I have to eat in a restaurant by myself or I’m just on a long train journey and I haven’t got a book it drives me insane. I know we can read things on our phones but it’s kind of different. I’m always reading. I used to read two newspapers a day. I don’t buy a paper anymore. So I would say reading or getting involved in a really good box set, and I walk and I cycle”

During lockdown what did you do to keep yourself both physically and mentally active?
“I drank Gin to stop me going mad (laughs) More of the same – reading. Also London was a different place so the first time I went out on my bike and there were no cars and I could hear the birds, I was like I must do this everyday. So there’s a friend of mine, she’s a writer, she lives about four doors around the corner from me, we’d get on our bike’s and just ride and riding into town was like a revelation. I think I probably rode more in London than I ever had before on my bike. I also drank a lot of Gin in my garden which was fun. As actor’s if you haven’t just been for an audition, you’re waiting for your agent to phone and you want them to phone and you want them to give you an audition, you got rehearsals starting, there’s always something to keep you busy. During lockdown I was filming in Bristol and then the filming shut down and everyone came back to London and then what I started to realise was that every single actor I knew was in exactly the same position which is really rare. No-one was auditioning No-one was doing anything for the first three months. My son was off work, he’s a chef so he works really hard, he was off work so we spent a lot of time in my garden, did a lot of catching up. I found lockdown was really good for me”

What is some advice you can share about improving the quality of the voice?
“All the vocal stuff we do before a show, humming, facial exercises, breathing. Breath is the number one most important thing with your voice and yoga’s really good for that. Sometimes we can think we’re breathing properly and we’re not and you can go into a yoga class and they can say a couple of words and you will think oh yeah I haven’t actually taken a deep breath all day. So breath because it’s lung capacity, being conscious of your breathing. Humming, the vibrations loosen up the body getting the breath and the voice ready to move through the body I would say that’s all really important. And to sing. If you find yourself singing unconsciously in your house to a song that you really like you find that you’re probably using your voice just as you should be but then your go to an audition and they’ll say can you sing? and immediately your voice sounds different because there’s more tension”

How does your diet interrelate with your acting work?
“I don’t know if my diet does. I’ve always been a vegetarian – I’ve been a vegetarian since I was 19. I would say that there are all these rules people have like you shouldn’t eat late at night, you shouldn’t eat after certain timed. When I’m in the theatre I don’t eat before a show so I will literally be having my dinner at 10.30pm. So in that way I can’t really work on a full stomach. Even in rehearsals I can’t. Sometimes you go somewhere and they provide you with food and it’s all like, I don’t eat bread anyway, it’s French bread, pasta and all those really heavy carbs it would make me just want to fall asleep in the afternoon, so I’ll definitely be having a salad or something really light. I think that’s really good for creative work”

What does the word movement signify to you?
“When I was at college I hated it when they’d go oh it’s movement but now I love it. I did a show I was working with Frantic Assembly an amazing mind blowing movement based theatre company, really strenuous. We had to do cardio in the morning and yoga in the morning but the way they integrate the movement into the show it just takes the visual spectacle and the understanding of the character, place, time, it puts it at a different level. So yeah I quite like physical theatre and movement based”

What do the word’s Form and Expression signify to you?
“The level of movement, the inventivness of it all, the playing with form. It could be the style of the show, it could be what you actually see, then it could be the way an actor has chosen to express a certain character. It could be a character everybody knows from a classic play expressed really differently”

How does art impact you?
“I love going to the theatre, I love watching TV, I love films, different kinds of art. I keep trying to get to Sadlers Wells, I booked tickets twice now and then I haven’t been able to go. I want to take my grandkids because something like dance when you say to them you’re going to see dance they’re like oh my God (not happy with the idea) but then you go and watch dance and you might not understand what they’re trying to say but sometimes with human beings moving in time, in sync, in unison, simultaneously, or not, is a beautiful thing to watch, it does something to your mind, so certain forms of art really affects me. Sometimes I see art and I think what is that? But then I think that’s what Art is. It’s very personal. I remember one time my son was out of school for a while and I just decided to take him to Art galleries, so we go to art galleries and we ended up seeing some great stuff like the Photographers Gallery and finding out the names of different sculptures and going to see their stuff and that was a real eye opener – what you like, what you don’t like. I think we need it. I think humans need art. Even if it’s listening to someone sing a song, or a poem we need expressions of our soul which is what Art is”

Describe how a rehearsal works?
“Rehearsals are so weird because you’ve read this play, you want to be in this play – and it’s all on the page. And four weeks later it’s astonishing what has happened because it stood up off the page, all the characters. You know you’ve watched people do stuff like hmmmm is that working or not working? For yourself you’re like, what I am I doing for quite a lot of the time, sometimes it comes together much earlier than others and sometimes you think on the fourth day or the second week this is going to be amazing but a lot of the time it’s like we’re all on this lake looking for the stepping stones to find each other and join everything together. So to me rehearsals are a period of miraculous amazing discovery and manifestation”

Book suggestions?
“I just read this book American Dirt which was amazing. I’m rereading my favourite book which is a Trilogy All the Pretty Horse’s by Cormac McCarthy. American Dirt is a good suggestion for now with lot’s of people on the move around the world, refugees or whatever, it’s set in Mexico and it’s about a woman and her son, that’s all I’m going to say. Read it. And then there’s another book called Harbor and that’s about a group of guys that come from Algeria on a container ship, they Stow away and they get into America and it’s about their lives and you know it’s like what you said about compassion, you read a book and you put yourself into somebody else’s shoes and you might stop saying thing’s like ‘why are they all coming over here and taking all our jobs’ and all that kind of stuff because sometimes a novel can give you a real human perspective and just how hard it is for those people”

Tweet
This entry was posted on 7 May, 2022 in homepage and tagged Clare Perkins, Joshua Phillip. Bookmark the permalink.