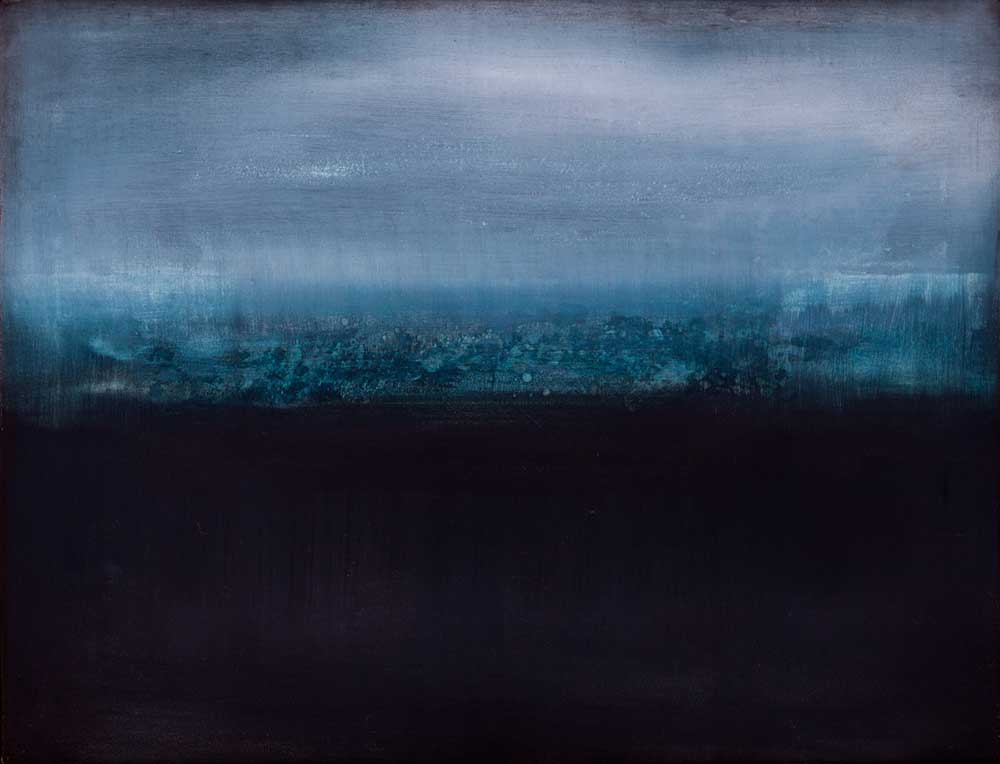 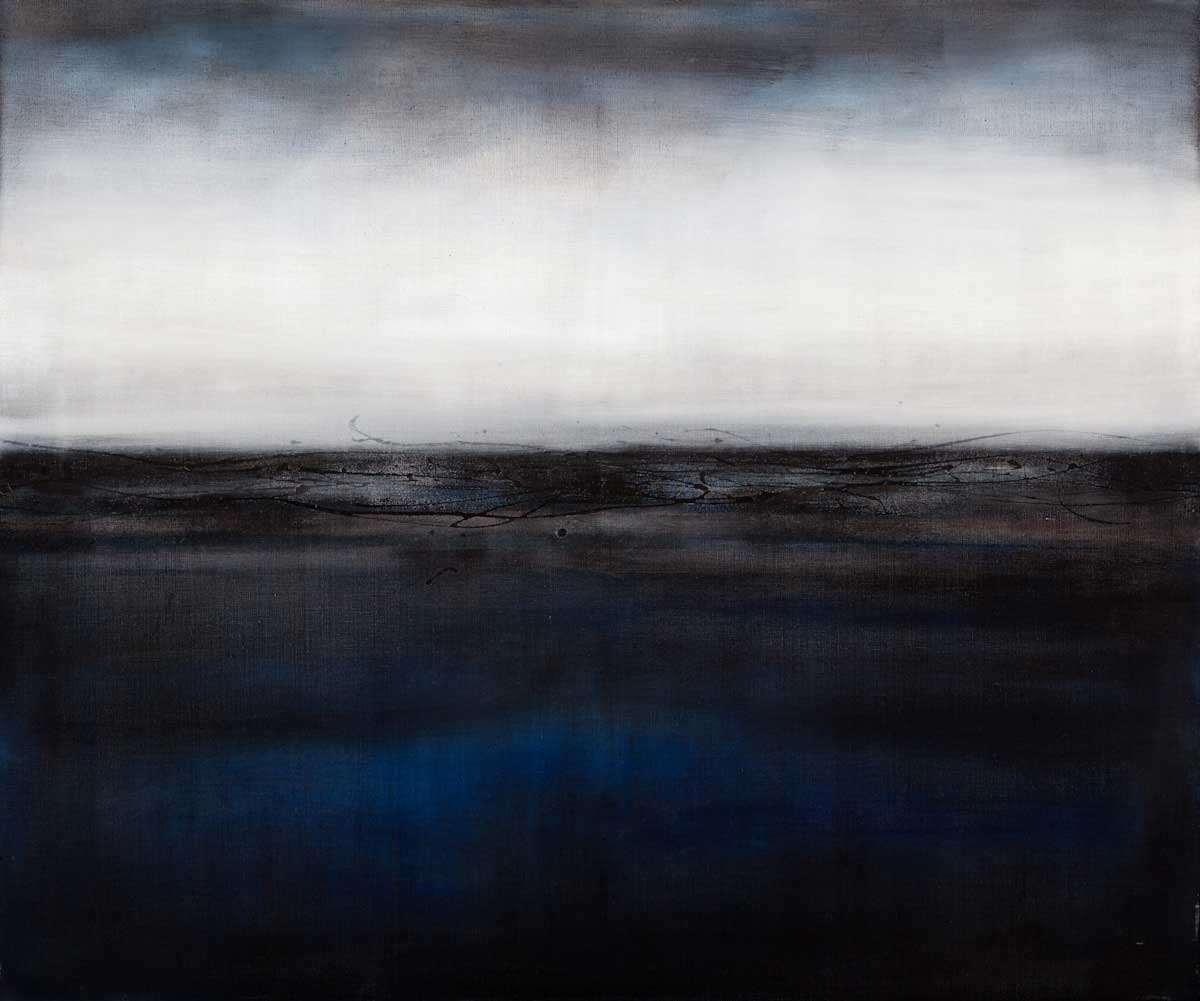 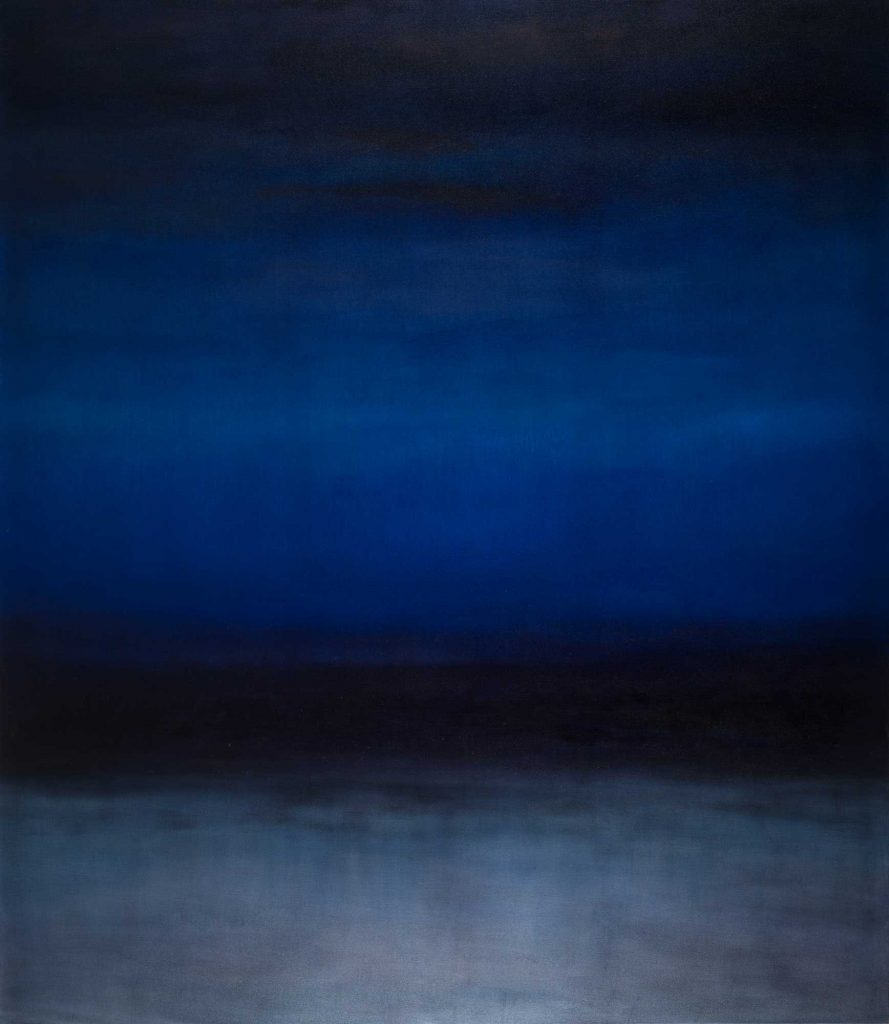 Claudia De Grandi’s work is a distillation of meticulous study and controlled thought inspired by music and meditation.  The canvases Claudia calls ‘moving meditations’ are to her private performance art, acts of body and spirit.  When she’s ready Claudia might issue an invitation to view her large paintings  – active contemplations  on abstraction and transparency, expressions of the air we breathe and the nature of transmission through space and time.

In another dimension to her work she also invites audiences to join her in the moment, ready to alter their states of mind to witness her art as an actual performance, to look and listen to ‘Visual Sounds’- improvisations by Claudia and electronic musician Joshua Tennent while they paint and play in harmony, discord and freestyle.

Claudia is a transnational artist concerned with how artists address identity and the modern mind. She grew up in SãoPaulo with a Brazilian mother and Italian father and has lived in Britain for over 20 years. São Paolo is also home to the largest Japanese diaspora in the world, since the first wave of immigration in 1908. It was inevitable, after studying the history of Japanese and Brazilian modernism, that Claudia would succumb to the spell of Japanese calligraphy and allow it to harness her flow and discipline her mind.  “I find it fascinating and inspiring how Japanese monks have recorded poetry on paper and how it becomes a transmission of their experience,” says Claudia.  “Those calligraphic characters are so meaningful, they have a language, and I am interested in building a language of my own.” She has been influenced by all things Japanese, from her early education in poetry, language and mark making.

Music, or arte superior, as Claudia describes it, is the basis for her art.  She was classically trained at the piano at a São Paolo conservatoire where she first realized music could be an abstraction.  She carried these ideas with her when she studied fine art at the University of Greenwich, and gained a Masters in Transnational Art at the University of the Arts London, recognised as the main centre study of culture from the post colonial world to its development in a globalised world.

Her large canvases are a process of application and removal, colour on colour, mark making  and minimalism.  “I might start a painting with a very thin dark layer like black, I will brush it away until it is transparent, and I carry on removing until there’s nothing, then I apply a blue.  Applying and removing.  I want the viewer to see the colours.  At first sight the paintings might seem minimal, but there is a lot going on.  There are colours that merge and there are many colours beneath the darkness.” By definition large canvases require the artist to move, so each work is an act of physicality. Claudia has devoted herself to studying with yoga masters in India and she is an Ashtanga practitioner.  “When I paint it’s a moving meditation, and the mind and the brush strokes are controlled through the breath.  My painting is repetitive – like Ashtanga Yoga, when you practice one sequence, there’s no going forward until you master the previous move.”

As well as her moving meditations Claudia has always wanted to combine her passions for music and painting  to make calligraphic abstractions to communicate in her own creative language.  She shares a love of Brazilian Bossa Nova, Free Jazz and Japanese minimalism with Berlin based electronic musician, Joshua Tennent.  His music is in complete harmony with Claudia’s meditational, immersive approach and their collaborations resonate as truly transcendental experiences.  Their creative collaborations known as ‘Visual Sounds’ started in a Berlin studio in 2015. Joshua played guitar while Claudia spread paper on the floor.  “I brought a little paint box,” recalls Claudia,  “acrylic and water colour and I started to paint.  We stayed there for three hours – playing and recording.  We’d look at each other, say nothing, carry on, and then we stopped.  We went for a walk, still without speaking.  Then we said, ‘It works!’”  Claudia and Joshua have since performed together in London and Tokyo. “I thought I would go to Japan doing what they have been developing for centuries – I didn’t even know what I was doing! Actually it was the opposite, the Japanese audience absolutely loved it as an abstraction.”

Claudia’s work addresses the universal with her gestural brushstrokes and improvised calligraphy.  “It’s about subtlety and being delicate. The human body takes up space. The mind takes up time.  How do you paint space?  How do you paint time?”

Claudia De Grandi, an artist from Sao Paulo, Brazil of Italian heritage is now living and working in East Sussex. Her passion, which provides an ongoing context for her art, is travel, and experiencing different cultures around the globe her raison d’etre.

Her works are exhibited and collected in the UK, Japan, Brazil and Europe.
A recently completed residency in Kyoto, Japan, where she exhibited her site specific series of paintings Sakura Zensen, also included her collaboration with American musician Joshua Tennent– Visual Sounds Project is the fulfilment of her vision to bring visual art and music together in one space.

In 2015 her painting Kyoto Season was awarded the Painter’s Prize at the East and West Award competition, Pall Mall, London.

Judy Parkinson is a writer, TV producer and artist. She has written best selling books about mnemonics and history; I Before E, Except After C and Remember, Remember the 5th November, among others. Judy has produced music videos, commercials and TV documentaries for all the major broadcasters, on subjects ranging from art history, travel, nudism to dentistry. She has exhibited her artwork on several occasions and she currently runs Drawing Life a project to bring life drawing to people living with dementia.

Tweet
This entry was posted on 14 June, 2017 in homepage and tagged Claudia De Grandi, Judy Parkinson. Bookmark the permalink.