Clinton V’s Bush: Damned If You Do Do 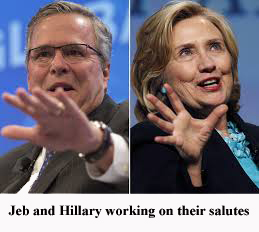 The two nominees for this year’s US presidential election race are causing American voters to feel genuinely ‘spoilt’ for choice. Though Hillary Clinton and Jeb Bush work for the same company the CFR (the shadow government’s international policy makers, war planners, slave consultants and advertising agency) both candidates are promising radically different styles of leadership.

Mrs Clinton assured voters that she will be, in every way, as trustworthy as her ever-faithful husband Bill. During his two terms the beloved ex-president only got caught telling one lie regarding his affair with Monica Lewinsky though he did tell it over four thousand, five hundred and fifty two times. Mrs Clinton said, ‘If I were caught, ha ha for instance having oral sex with one of my firm-bottomed young interns, just like my patriotic husband I would simply bomb some countries, play the saxophone and say that, though I had taken drugs, I had blown the smoke out of my ass so it didn’t really count.’

Jeb Bush claimed the US would be in as safe a pair of hands as it had been during his brother’s and father’s tenure which oversaw the country’s slide into three calamitous wars costing millions of lives and six trillion dollars. Mr Bush announced that his central campaign pledge would be one of security, a subject on which his family were experts. He added, ‘My family’s experience in this field includes my brother Marvin overseeing anti-terrorism measures at Dulles Airport, United Airlines and the WTC that so nearly caught the hijackers on 9/11 and of course my Grandfather Prescott who ensured security across Europe by giving the Nazis billions and billions and billions and billions and billions of dollars.’

View all posts by Ethan →
This entry was posted on 16 April, 2015 in homepage and tagged current affairs, Ethan Harrison, politics, satire, spoof news. Bookmark the permalink.