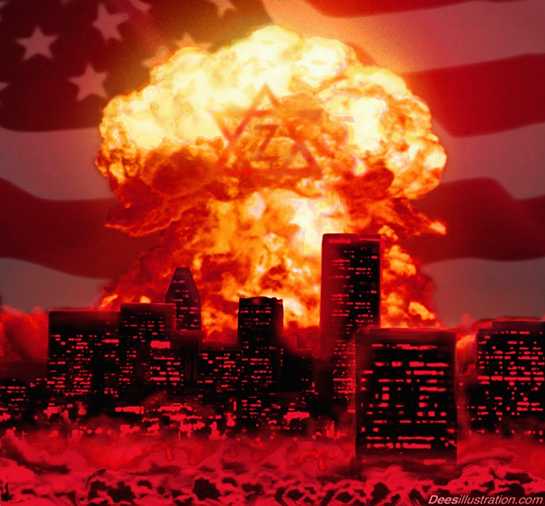 Although they stand at diametrically opposite extremes in the process we call ‘life’, their presence is increasingly felt within the everyday workings of our planet.

The concept of ‘collectively realized creation’ is rooted in the collective unconscious of humanity. In all of us. It is that which informs our desire to live – and to outwardly express that desire. To express it through actions that reflect the depth and wealth of the divine sparks within each one of us.

Whereas ‘mutually assured destruction’ (MAD) – a term used to describe the East-West ‘Cold War’ nuclear missile build-up of the 1980’s – has no part in the human script; but is nevertheless a state towards which our planet is being pushed by forces that appear blind to their own madness. But then perhaps madness cannot ever recognise itself.

As it is, it has turned-out not to be that hard to set humanity rushing off in the opposite direction from that which informs the flowering of collectively realised creation. All it took was the devising of a confidence trick to make we humans feel guilty about that which fulfils our simple heart-felt joys.

Once successfully seeded, the relentless stoking of this ‘guilt/fear’ confidence trick, caused it to take a stronger and stronger hold on the psyche of humanity, until the great majority had taken it upon themselves to purchase an insurance policy with ‘Mutual Assured Destruction plc’.

An insurance policy guaranteed to so deaden the voice of the natural life force – that Collectively Realised Creation could no longer make itself heard – or barely.

However, sometimes some of its clients still inadvertently feel an unpleasant twinge of consciousness. A brief painful glimpse of truth, whose origin is usually traced back to Collectively Realised Creation. This pain is very irksome – so its sufferers rush to put in a claim with MAD, which after all, guaranteed protection against the promptings of truth.

MAD is generous in this – it pays-out – as well as offering its claimants further protection free of charge!  Its happy clients head at once to the glittering arcade for their brand new flat screen TV, microwave and I-pod. The zombie purchaser does not see, of course, that each purchase provides further fuel to the sycophantic ambitions of Mutually Assured Destruction.

It is no surprise that MAD has become somewhat bloated on the poisoned fruits its own success.

A success unprecedented, not only amongst other ‘mutuals’, but amongst multinational corporations in general. In fact, sensing the opportunity to still further increase its empire,  MAD recently brokered a deal with the architects of ‘Full Spectrum Dominance’. And in a wedding made in hell, the satanic duo headed-out to silence, once and for all, the never entirely repressible energies of Collectively Realised Creativity.

The Full Spectrum Dominance school of top down control has long since been interested in the complete transcendence of limitations. That is “getting beyond gender, law, nature and time and space” (John Dyer). They are the people behind the establishment of the world’s vast trading blocks, the Agenda 21 scam, smart grids, biochemical weapons and the push towards a progressive take-over by artificial intelligence – the transhumanist agenda.

They are Bilderberger emanations; the architects of TTIP, NAFTA, the military industrial complex, atmospheric aerosol geoengineering and the deliberate fermentation of world wars. The full realisation of their game is the establishment of a One World Government.

But these dark agendas used to be hidden. They were fermented in great secrecy; they were known only to a few. They were subject to Masonic and Jesuit blood oaths of obedience ‘not to tell’. But all this has changed. I wouldn’t be writing this article if the knowledge and exposé of these agendas weren’t rapidly gathering momentum; if a broad awakening wasn’t well under-way.

So it is, that in this 21st century, our blessed planet Earth has become the theatre for a mighty show-down between diametrically opposed forces: those of Collectively Realised Creation and those of Mutually Assured Destruction. Utterly antithetical visions of the future – increasingly played-out in the here and now.

There can be little doubt that the bloated over confidence of MAD is currently suffering incessant puncturing by the bright arrows of collective truth. The entire empire of what we know as ‘the status quo’ is rocking on its hinges – and the door marked PTB threatens to become entirely unhinged.

Collectively Realised Creation is gaining in self confidence daily. She is staging a major come-back, and MAD knows it. That is why this is such a pivotal time for us all. For planet Earth, its animals, trees, rivers and seas.

Within the volcanic eruptions that manifest with ever greater frequency, a symbol of yet greater eruption can be felt. A trembling in the air and at the very depths of existence. A huge metamorphosis rising ever closer to the surface of all human affairs. Birth pains of the world to come.

We should expect the unexpected in apocalyptic times like these.

Uncontained acts of savagery and torture stage their pent-up violence, openly. Mind controlled mental cases go on the rampage. While the sons and daughters of millionaire bankers sip champaign on ice in six star hotel bars as millions face starvation in foreign deserts of exploitation.

It’s all up on the screen now, in fifty shades of red and green.

Yet, simultaneous to these manifest scenes of destruction, are scenes speaking boldly of creation. Of the building of unity around great humanitarian initiatives. Of overcoming the torment of weaknesses that provide ready fuel for the vampiric MAD to avidly gorge itself.

It is here, amongst the rising Phoenix of awakened passion, that we belong. We who feel the sap rising in our salty veins – who sense the powerful portent in the great show-down of diametrically opposite intents now engulfing humanity – demanding an unwavering answer to the ever prescient question: ‘to be or not to be’ ?

But we know that in truth – there is no ‘choice’. For we are the Collective Force of Creativity. It is we who are awakening from our prolonged and listless sleep.

Yes, and it’s a seriously rude awakening. Because after wiping the sleep from our eyes, we find ourselves looking straight down the barrel of nothing less than MAD’s merciless machine gun – which will surely fire us – should we fail to rise-up as one – at this – our final call.

So draw unto yourselves your divine courage, dear friends. For rise we must – and rise we will.

To defeat that which would forever repress us and keep us from fulfilling our reason to be.