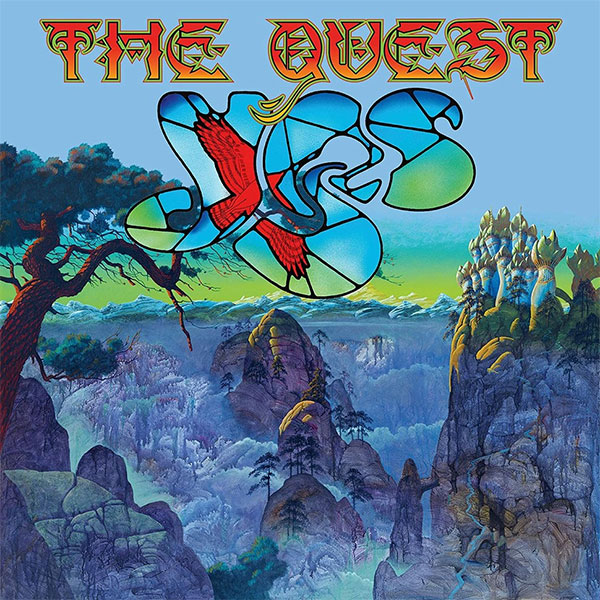 ‘What happened to those songs we once knew so well?’ is a question Yes once asked. Those songs seem to be confined to history now, as the frayed remnants of the current band, grouped around guitarist Steve Howe and ailing drummer Alan White, tour when Covid and health permits, and make occasional forays into the recording studio.
Now fronted by a singer originally from a Yes tribute act, the band’s ranks include one of White’s mates on studio percussion and drumming on tour, the returned Buggles and former Yes member Geoff Downes, along with Chris Squire disciple and former touring band member Billy Sherwood.
The Quest has been a long time coming; it’s several years since 2014’s Heaven and Earth studio disc, though a number of live albums have been released on the back of various album tours where the band perform one or more albums in sequence accompanied by a few greatest hits, always including the obligatory ‘Roundabout’.
Trouble is, it’s the greatest hits we all want to hear, if recent studio albums are anything to go by. It’s a widespread problem: inventive and accomplished progrock band from the 70s simply loses the ability to progress and reinvent themselves, instead slowing down and moving ever closer to Adult-Oriented Rock. One can only imagine how hard it is to engage with contemporary music and technology, let alone continue to experiment or be cutting-edge. I mean, the laughable image of Yes combining hiphop, garage, beats and rap is pretty frightening. But there must be other possibilities?
However accomplished and varied The Quest is – and it is – it plods. However clever and layered and textural it is, it’s ultimately dull and well-played, with nothing to grab you, first time or later; and it doesn’t get any better, however much you persist with listening. Gone are the free-spirited and poetic lyrics Jon Anderson used to provide; absent are the scorching guitars and reverberating bass; missing in action are the layered keyboards and intricate percussion.
Yes, of course, Howe can still amaze with his guitar licks; yes, Geoff Downes’s approach to keyboards may be different from Wakeman’s, Kaye’s or Moraz’s (especially Moraz’s!) but he is a fantastic player; and I have no problems with Jon Davison’s singing, as he offers his own twist to those high angelic harmonies we expect. There’s just nothing here that surprises or challenges.
You can laugh, but Yes excelled when they were pretentious, naive and ambitious: concept albums inspired by a yogi’s footnotes, the jazz-rock recreation of War & Peace using found metal, side-long songs in several movements, abstract love songs, and grandiose spiritual paeans that swelled to bursting point out of your speakers.
Now all we get are songs with a maximum eight minute duration, each with a verse, chorus, middle eight and some clever widdly-diddly keyboards or tasteful guitar. Plus a second CD of three songs that not only don’t fit with the eight songs on the album proper (i.e. the first CD) but are truly appalling, especially one which threads together the titles of Beatles songs as lyrics. I mean, really? Is this Junior School poetry or what?
I really wanted to believe this was the promised fantastic studio album, the return-to-form, the true re-emergence of a real Yes, the glorious flowering of a group of musicians who have been together as a band for many years now and who I have enjoyed seeing live several times. But it’s not. It’s pedestrian, lacklustre, obvious and exactly what I hoped it wouldn’t be: utterly forgettable.

View all posts by Rupert →
This entry was posted on 23 October, 2021 in homepage and tagged Rupert Loydell, The Quest, Yes. Bookmark the permalink.