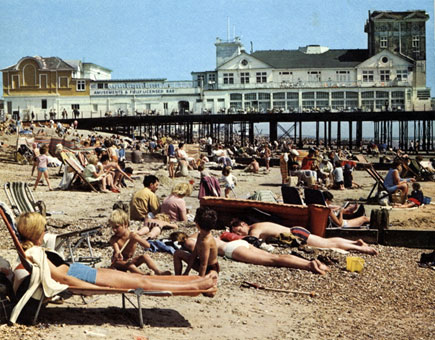 Stuart Lindsay and myself were both school students at the Bognor Regis Grammar School in West Sussex (which went comprehensive in 1967). It was a popular seaside resort back in the ‘60s. Since we left school in 1969 we’ve maintained contact and I sent Stuart an invite to contribute a personal view on life in the USA during the Covid pandemic. He has very kindly obliged. The new buzz-phrase is: ‘No-one is safe until everyone is safe’. My own view is that the world is now a fair bit safer with President Biden having replaced Donald Trump. But, all life is inter-connected and it is a very fragile balance at the moment. Looking at the USA from the UK, it appears to be mother-lode of many conspiracy theories and anti-lockdown/anti-vaccination campaigners. So, in the coming months and years, as we hopefully edge out of the current Covid crisis, success in supporting and calming the edgy and frightened citizens will depend to some extent on the sanity of our politicians and governments.  Over to Stuart… 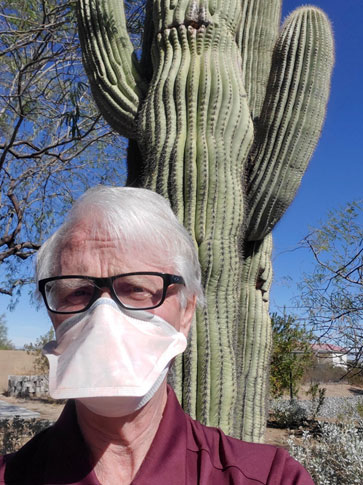 Stuart in his virus-fighting N95 mask

I am a physicist who relocated from the UK to the USA forty years ago.  I teach at a large public university and run a research lab in the ‘Biodesign Institute’ at the University.  Though my focus is physical science, my goal is improving human health, an area where there are surprisingly good opportunities for physicists.  However, I moved to the USA for one, and only one main reason:  I was offered a job in Arizona, a place I fell in love with at first sight. I continue to love it with a passion that is renewed with every desert sunset.

That said, for many weeks now my beloved Arizona has topped the Covid Charts with 100 to 150 cases per 100,000 population.  At least 10% of our population have been infected and one in 600 have died to date in this State. It is much worse still in minority communities, particularly in the vast open vistas where Native American communities are based and where health care resources are sparse.

Why is the situation so bad in one of the most economically developed countries in the world?  One answer is a lack of centralized health care and an almost non-existent public health infrastructure. But the main answer has been lack of leadership, and worse than that, divisive leadership. A president who branded the media as ‘Fake News’. A president who has generated over 30,000 documented lies (many about the pandemic itself). This is not a person to provide intellectual and moral leadership to the country. Mask utilization needs to be at the 90 – 95% level to reduce the spread of this disease significantly, so the President’s words, and his devoted cult, have fanned the flames of the pandemic. He has taken pleasure in ripping up scientific advice.  And the results are both tragic and pathetic:  Devastated relatives have been quoted as saying something like “How could dad be dying?  Everyone knows Covid is a hoax to get at President Trump”. The (substantial) number of Trump cult members live in an Orwellian world of inverted truth. Not since Josef Goebels has a politician proved so adept at the ‘Big Lie’.

Public health is, perhaps, the one area in which collective action is absolutely essential.  Yet much of the American ethos is focused on the rugged individual: “You can’t force me to wear a mask – it’s against my constitutional rights”, and this ethos has fed on Trump’s rhetoric.  Since the main function of masking is to prevent spread of the disease by asymptomatic individuals, ‘individual freedom’ comes at the expense of others, often many others.  Thanks to the Trump Cult, nearly half the population believes there is no problem, so there is remarkably little panic amongst the general public as the disease rages.

That said, there is a rump of believers in a civil society. Masks are worn, distances kept and hands washed.  These folks tend not to be supporters of Trump.  A number of legislators have come down with (and some have died of) Covid.  Almost all are members of the Republican Party.  The only exceptions that I know of are three unfortunate Democratic members of the US congress locked in a room at the US Capitol with unmasked Republicans during the recent riot.

The pandemic is as cruel as any other mindless force of nature.  It is the poor and less-well cared for who have suffered the worst outcomes and morbidities.  900 members of the Navajo Nation have lost their lives.  This is out of a resident population on the reservation of 170,000 – a death rate of about 1 in 200. 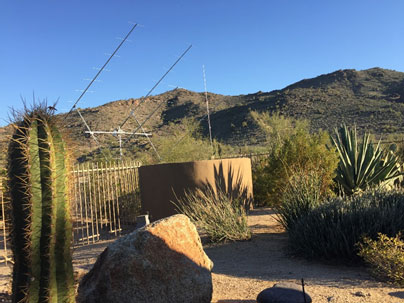 The flip side of that is how the privileged, particularly the educated and privileged, have done well this past year.  While half of those in the lowest third of income brackets cannot pay bills, the upper third have gained in wealth as the stock market has flourished. Jeff Bezos, Mark Zuckerberg and Elon Musk made $115 billion in 2020. Our family is not in that lofty income bracket, but I have been able to work remotely and have not lost a penny.  The same is true for the families of our three daughters (though our oldest daughter quit her teaching job rather than return to the classroom).  We all mask-up with the luxury of virus-fighting N95’s, and Amazon delivers all our worldly needs. And we avoid any and all crowds.  So the whole family has stayed Covid-free.  The grandkids have had a hard time with online school but they are getting by.  And a number of us have had (or will get) the vaccine soon.

And there are upsides to this wild-west Covid Capital of the world: lots of open space and an outdoors-friendly climate.  We are lucky to live on the side of a desert mountain reserve on a large lot surrounded by towering saguaro cactuses and distant neighbors.  So we can get to share a drink sitting outside while watching the desert sunsets cast their red glow on the mountains. The howls of coyote packs sometimes break the silence.  Covid has not taken the beauty away from this special place.  As I write this, tomorrow will bring a new president, and a new order to America.  The future begins to look brighter, and grandkids will be hugged again.

I hope those poor souls captured by the Trump cult see the results for themselves and learn from them.

A post-script: Things are looking brighter as the new administration takes over.  The torrent of lies from the top has been turned off, and I see the support for lunatic inventions about the pandemic beginning to shrivel.  It won’t go away quickly though.  The ‘bubbles’ that the internet has created will ensure that many remain trapped in webs of fantasy.  Unfortunately, they will pay a price of poor health and more wretched lives.

Tweet
This entry was posted on 6 February, 2021 in homepage and tagged Alan Dearling, Covid Capital of the World, Stuart Lindsay. Bookmark the permalink.

One Response to Covid Capital of the World – Arizona, USA