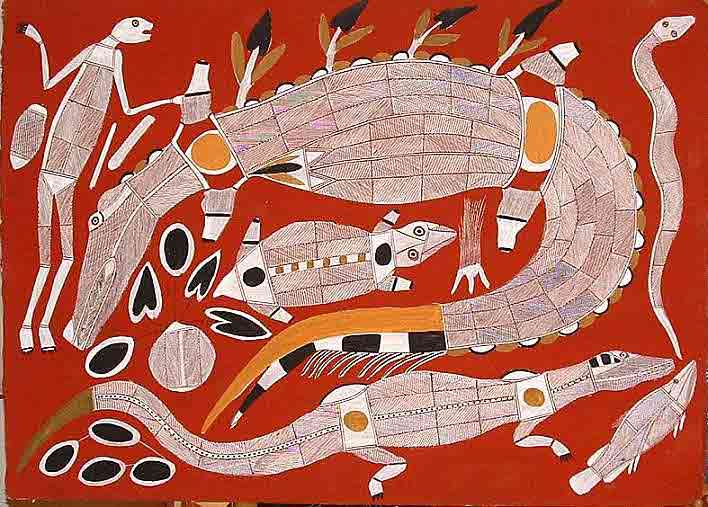 I was with this Australian mining company, in the outback, surveying.

I’d gone there because there weren’t any jobs here, not after she became Prime Minister.

One night some Aborigines walk into camp. The others sent them packing – Aussies were worse than white South Africans – but I followed them back to their campsite, took food and tobacco for sharing.

They invited me in and we got to swapping stories. Every time one of theirs tells a tale, another moves close to see if I’m smirking.

They told me that it wasn’t stories came out of creation, it was creation came out of stories.

Night after night, I kept going back, listening now more than I’m talking until they say there’s a place I should see but they’ll only take me if I agree to be blindfolded. By now, I trust them so let them lead me for hours in tightening spirals.

We stop and when they take the blindfold off, we’ve reached a billabong. Above us, a sky like I’ve never seen and because the water’s pitch, it’s reflected perfectly. There’s no up or down, just parallel infinities.

An old fella squats down, begins slapping his spearhead onto the water and doing this deep throat singing.

Two stars, red glowing embers, detach themselves from a constellation’s cluster. Space wrinkles. Ripples rise then fall away, their edges fraying as they collide, fold in on themselves.

One of the Aborigines hands me some meat and putting his hand on my shoulder, walks me down to the water’s edge. He tells me to put the meat on the ground then we both step back a pace or three as a crocodile breaks surface, bone white and sixty feet at least.

He emerges, black water rolling off his back, stays low, approaching slowly, he noses the meat, pauses, looks at me, gulps it down and then, when he slides back into the water, sinking without a ripple, it was as if  he’d stayed still and water took him back in.

They blindfold me without a word and lead me, back just in time, to watch the rising sun.

That next day, as I stumbled through my work, everything seemed exaggerated or in the wrong order and that night, when I went back to their camp, even their footprints were gone.

Tweet
This entry was posted on 8 August, 2018 in homepage and tagged Kevin Patrick McCann. Bookmark the permalink.