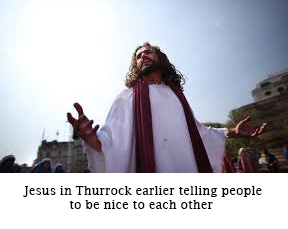 In a bold move today Department of Work and Pensions officials revoked Jesus’s Christmas licence ahead of new plans to ban the once-popular, religious megastar from yuletide celebrations altogether in 2016. Atheists everywhere welcomed the news after years of being made to feel slightly guilty for gorging themselves throughout the festive season whilst others lay starving in the street and it is thought these new moves by the DWP will give them the chance to blame their gluttony on evolution and not a lack of spiritual mercy.

The ridiculously-named I.D.S [Ian Duncan Smith] head of the DWP, chief anti-Christian and leading Tory bigwig, or Bellend to his mates, boggled his soulless eyes about and bleated from inside a suit worth more than an ambulance, “Let’s face it a lot has changed since Jesus’s day and I’m afraid he hasn’t moved with the times. We simply feel that in our current Christmas environment, or as it is now to be called ‘Yuletide high street and armchair experience’, the last thing we want is to have some happy sin-dodging, do-gooding, do-gooder going around telling everyone to be nice to one another and give all their money away to the poor. When, of course, they should be giving it to my friends in the Satanic – huh hum – I didn’t say that – corporations. For these reasons Jesus’s Christmas licence has been revoked and next year he will be banned from celebrations altogether and forced to stay at home on his own or work the night shift throughout the festive months for minimum wage changing the bin liners in a McDonald’s drive-thru car park in Croydon.”

Languishing inside his modest, TV less, one room bedsit under the M 25 in Thurrock the 32 year-old Jesus was philosophical about his up-and-coming Christmas ban, “I knew things weren’t going to go well when my second coming was overlooked in 1983 because of Star Wars 2. I hate Star Wars. Well you know what I mean. Never mind. I suppose it’s for the best. The last time I went out at Crimbo, as I call it, telling people to be nice to each other on my birthday and all that, I got punched in the face for having a beard and being gay. Oh well. Forgive them Father eh? At least beards are in now but if I can’t go out what does it matter? I can’t afford the night bus to go and work at the McDonald’s in Croydon so I guess it will be another Christmas on my own then. I’ve said it before and I’ll say it again, Dad, Jesus wept.”