Extract from High Wired On 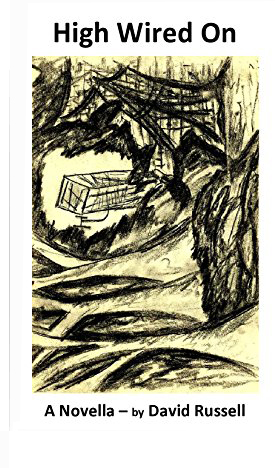 Yet as Billy grew up, his home deteriorated. Behind a veneer of nonchalant plastic prosperity, creeping damp and dry rot spread relentlessly. Every possible creature comfort had been bought for the interior: colour TVs, soft furnishings, wardrobes crammed with flashy clothes. Yet behind it all, the walls crumbled and flowered with fungus. The wallpaper reeled and peeled, its jagged edges pointing in all directions, limp and sharp in one. Plaster showered down, powdery and chunky, sometimes for split seconds, sometimes for minutes on end. Mice powdered the floors with their paw-scratchings, sometimes fumbling on frayed strands of electric wiring, making blue sparks fly, giving shocks to themselves and to any human beings who were around at the time. The rattling rodent pests were badly shaken; they scurried to their crannies of safety. Switch covers were pulled off, bulbs blinked while their flexes slowly melted, emitting scorching fumes. The TV was on from early afternoon to midnight. The colours on the screen went through every possible modulation, without anyone twiddling the knob. Throughout the mornings and afternoons, the washing machine whirred and gurgled. Jack ignored the hazards. Molly, his wife, moaned on, animated by having something to grouse about:

“I bet the wiring’s never been seen to since the place was built! Everything’s going to rack and ruin – we’re living in a deathtrap here – and Billy playing with all those dangerous gadgets too; makes me feel like a cat on hot brick. Don’t know what you expect me to do about it – you go on at me quite enough about other things. We’re living in a shambles; it’s crashing about our ears. And you just loaf in your armchair!”

“I wish you wouldn’t go on so bloody much; piss off – you get on my wick!”

Disgruntled, she shuffled off to the kitchen, and slammed the door, leaving Jack to doze off. Nothing was done; some fuses blew, but there were no major accidents. Day-to-day routines kept on while relationships crumbled, in eerie harmony with the indefatigable dilapidation of the house.

By the time Billy was sixteen, Jack was a wreck – burnt out by strain and overwork. Well before official retirement age, he had had enough of being alive. When Molly was away for a few days visiting her sister Flora, Jack went to the bathroom  cupboard, opened up a box of sleeping pills which he had stashed, and swallowed the lot. He staggered into bed, undisturbed, and passed out.

Three days later, Molly and sister returned, both being keen to extend their gossiping time. After making up the put-u-up couch in the boxroom, Molly peeped into the bedroom. Seeing Jack there, she assumed he was asleep. She pulled the door to, not wishing to disturb him, and went to lie down on the put-u-up, leaving her sister to read some papers in the kitchen.

After an hour or so, she arose, made a pot of tea, took a cup to her sister, then want to wake Jack:

There was no response. She shook him; he was limp. She touched his brow. It was cold; Jack was not breathing.

“Somebody help, for God’s sake!”

Flora rushed in, and saw the empty box on the floor. She screamed, and rushed to the phone . . . probably too late for the stomach pump.

The coroner had no great difficulty in reaching his verdict. Molly was beside herself: “But why here? Why now? What wrong did I do? Did I drive him to it?”

The tears were as few as their matching words. Molly felt no real pain, only as much grief as she felt suitable for others to observe. Jack’s simple will was found in a chest of drawers in the bedroom. He had asked to be cremated, and for all his money and worldly goods to go to his wife. Billy wasn’t mentioned. (He didn’t care; he was already setting himself up in his new flat.)

Molly was confidentially delighted at this occurrence – she’d have the place to herself. With her pension, and some extra money for letting rooms, she could live quite comfortably.

The night after the will was read, as Molly slept, briefly contented, the wiring blew and the house was gutted. There was a delay of about twenty minutes before the Fire Brigade was contacted. All the local call boxes had been wrecked, and the shops nearby were shut. Someone rushed into a hotel, and the receptionist was amenable. The lights in the house were feeble against the flames.

Billy came round the following morning, on a prearranged visit to collect some of his belongings. A policeman was standing guard by the front gate; Billy was ushered in to see a charred corpse. From the chain and medallion around the neck he recognised his mother. So much bereavement, in such a constricted time-span!

The two funeral services took place in the same chapel, in quick succession. They were sparsely attended. Some day his parents’ fate would catch up on Billy. But right now he ached for higher flames, to be himself a pile of ashes, bigger than those of the house. Having glimpsed some of the depths of the human condition, Billy reconciled himself to its surface norms. Future crises would come in  their own good time. Meanwhile, he was truly alone – no surviving relations except one aunt, who lived hundreds of miles away up north, and with whom he did not get on. Still, he had completed his schooling, and entered ZXY Computers as a trainee. He could manage appearances.

High Wired On by David Russell – Risingshadow
www.risingshadow.net › Library › David Russell
A novella. Very Strange! This reminds me of one of those dreams you have that make perfect sense, until you wake.

Tweet
This entry was posted on 7 March, 2020 in homepage and tagged DAVID RUSSELL. Bookmark the permalink.