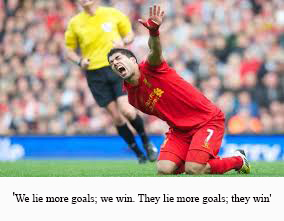 An international policy unit set up to look into ethics in sport has released a damning new report claiming that the historic rise in footballers’ wages has been directly proportional to the explosion of lying in the game which, like the money flooding into the sport, is currently at an all-time high.The successful careers of some of the best liars in football has caused team coaches, pundits and supporters alike to drastically re-think their entire philosophy toward to the once beautiful game. Now some are even brave enough to suggest changing the name of the world’s most popular team sport to ‘Lieball.’Football supercoach Diego Zetzilla, otherwise known as ‘The Lying One’, echoed these sentiments. Speaking from his trainer’s dug-out and from both sides of his mouth at once he said, “Everyone knows football iz all about lying now. Yes? We lie more goals; we win. They lie more goals; they win. First skill practice on training field: how to secretly but painfully tweak another player’s nipples. The best players, they can do this to a man standing behind them when they are facing the other way kissing their fingertips at the referee. Genius. Skill two: how to say ‘Your mother is a whore’ in sixteen different languages – twenty four if it is in World Cup eh? Heh hen. Lesson three: how to fall over and lie. This is the most important skill of all. More goals are scored this way than any other. So the player who masters this will always be the best. Then there is lesson four: to play, to pass and to, how you say ‘dribble?’ No? That is blah blah. Trust me when they run around for long enough they soon get that part, No. It is the falling over and lying that is the most important skill.”
‘Live’ polygraph tests for players, consisting of a red and green light bulb sewn into the shoulders of their kits, were ruled out by FIFA boss Micheal Platini who also famously turned down cameras and other ‘smart’ technology introduced to stop France reaching international championship semi-finals. As football continued its inevitable slide into oblivion and the very reason for the sport itself came, into question, once again, other soccer talking heads were eager to ‘kick off’ and give the sport the ‘red card.’ Speaking over the front gate of his mock Tudor cottage in Berkshire, Peter Shilton, not-so-famous-anymore-especially-to-kids England goalkeeper from the 1970’s witlessly bemoaned the situation, hooting like a lost Alsatian looking for its owners, “At the end of the day if you had carried on like that we I was young someone would have told you to go and sit in the transit till the match was over and no bits of orange at half time. No way. Plain and simple. That’s that.”

To combat the rising epidemic of football lying the ethical policy unit made a raft of suggestions including establishing a ‘W.O.O.F.T.A.A‘ ‘World. Organisation. Of. Football. Terrible. Acting.Award.’ This Oscar-like trophy would be publicly presented to the players in an attempt to modify their negative behaviour traits by subjecting them to acts of ritual personal humiliation similar to those experienced in the sport’s joint-bathing areas. Joan Breech heading the policy unit said, “The worst lying footballer would be voted for every week by members of the public then presented with the award live on Saturday night national TV in front of his friends and family to try and get the idiot to stop leaping about and crying like he’s been hit by a tractor every time someone standing near him opens a packet of crisps  It’s the only thing we can think of apart from taking away all their money. It’s either that or tying football bootlaces around their bollocks and giving the other end to angry spectators who can yank on it when the player starts acting like a twat.”

Cristiano Ronaldo and others featuring …

View all posts by Ethan →
This entry was posted on 18 February, 2016 in homepage and tagged current affairs, Ethan Harrison, politics, satire, Social commentary. Bookmark the permalink.