FROM STEPNEY, FOR SPACE 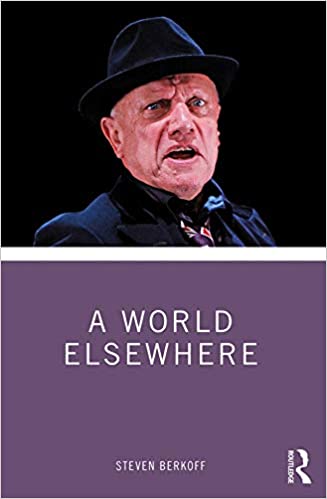 Berkoff’s new book is a hard won grimoire to glory.
Published by Routeledge, that academic arm grasps his Art,
As  Steven studies himself in this running discourse
And catalogue of creations which have helped to redefine
Modern Theatre, and what an actor can do, gripped by craft.

Convention was never for him, as his autobiography
Free Assosciation first detailed. As did Diary of a Juvenile
Delinquent, Prisoner of Rio and Tales from an Actors life,
Some past tomes. But this book above all is the one from which
Students and actors too can gain entrance, not just to the man

And his theatre, but to the spirit which fired the still stunning
Flesh on those bones. SB is now in the ‘sere’ of his years,
As he writes, quoting Shakespeare, but he is still Steven Berkoff,
With the same force and fury that commanded tides to make seas
From a fistful of words; he shaped shores and oceans

Across which pioneers started sailing, just as his inspirations:
Olivier,  Artaud, and Jacques Lecoq, fuelled his speed.  From Stepney
He sprang, bubbling forth in the Sixties; nearly ruined by Rep,
He tore pages from Kafka and Poe to reform what could be done
With the word when it was it spotlit on stage to score shadow;

For in passing through these great classics he became
Seminal. From Kafka’s In the Penal Colony for Jim Haynes’
Arts Lab in 1968 his world started. Ploughing a field grown
From torture, and the Sentence machine scoring victims,
Branded like bled animals. The first Metamorphosis gained

New ground as his second production; now seen across
The world with all countries embracing Berkoff’s Kafka
Coloured cockroach, whose metranomic insistence saw
The Berkovian  style effervesce. With that followed fast
By an impressionistic Miss Julie, before Agamemmnon

For RADA saw his London Theatre Group  coalesce.
Berkoff taught in Drama Schools as he learned how
To perfect his intention, gaining sympaticos
And companions, he peopled a pure and poised Theatre
Which made everything possible, such as corridors made

From hands. Or the magic of books as man music.
And a new style to speaking that gave oratory access
And made poetry unstoppable. His Fall of The House
Of Usher exists in its Amber Lane text and some photos,
Gauze and light grounding the haunted air in his stare.

He writes of remounting it now, nearly fifty years later.
What a sight to see! The Man/house as a horror
Which would even today form a dare against the conventions
And creeds he’s raged war at for decades; as evidenced
By the writing of his first original play. In all of these works

He’s contained, but in their release he’s explosive.
A powder keg in his Eighties, just as he was in youth’s day.
Berkoff is Mike’s cunt speech in East, but he is also Valeria’s
Exquisite mimed stitching in (his) Coriolanus. He is Roderick’s
Slow scream in Usher and in Salome, Herod’s howl.

But in that first play, his verse equivocates London
With Stratford, as Shakespeare meets Stepney,
And the Cockney stamp rears fresh Hamlets who
Do not stoop, doubt or cowl. East was a sensation
And played at the early National Theatre.  It also gave

Steven’s squadron their first proper sense of attack.
And in this book there is praise for all of those who formed
With him; from Barry’s Stanton and Philips, to Matthew
Scurfield. Bill Stewart, Linda Marlowe, and Joe Papp.
Whose belief with first wife Shelley Lee, initially bibled

Berkoff, alongside each musician and actor who let
The work and way set them free. As it would now,
As reading this book makes eyes moisten just as it turns
Hearts to fire when one sees what’s achieved
When iconoclasts cast aside theatre’s slick shackles,

As Berkoff’s bounty, seen in this valued volume  is to do
With playwriting and the production of such as a screed
For what creation truly is, or must be: a series of shifts
And small innovations which allow former totems
To topple and ruins to rise in the dark, in order to find

And reshape the space in which we can fully encounter
The Angel and then court the demon who whether we
Like it or not, leaves its mark. Decadence did that next.
As did Greek, Kvetch, Massage and Messiah, and some
Of the pieces not mentioned, such as  Lunch and Sink

The Belgrano, which immediately spring to mind.
But what Berkoff begets sets all stories rolling; formative
Stones that once thrown make mountains, and thus
Dramatic testaments for new times. Art is and must be
Defined by the contribution it offers. Separate to subjectivity,

The objective is to re-engage with the world and remake
It elsewhere, or to perhaps bring that realm closer,  an aim
That resounds within this book’s title and to the rallying flag
It unfurls. For this is the world and ‘cuntry’ he kissed
And these plays  are those kisses. They are also the sex

And the struggle, the Sturm und Drang in his cup.
And as he tells us his tales and maps out his methods;
From One Man to Acapulco, Ophelia’s secret love,
And the scumbags who litter (his) Brighton beach,
The jig’s up, and yet as a dance it is both forceful

And graceful. His hilarious Dog made him Maestro
Of mime as have all his productions, such as Greek’s
Word only fistfight and of course, Tell Tale Heart,
And those endless locks, and five minute (at least)
Spiral staircase: another belly laugh bred for wonder

And yet another example of Steven Berkoff and his
Sixty year art. The meal Berkoff bakes is both sweet
And sour.  It contains the smell of fresh bagels
And the handmade chopped herring from home.
It is a cuisine carved from care about what actors are

And can accomplish. From a young man’s frustration,
He balanced with beauty a way to celebrate the alone;
Through both stories and stares, from Iago to Titoreli,
To Mike, Dad and Eddy, to Beverly Hills Cop’s
Victor Maitland: A World Elsewhere crowns  the glory

Of what Steven sculpted from both breath  and the body:
He stepneyed out, and space spurred him to carve
His own landscape. This book shows that detail and how
Through that drawing he’s found some fucking life

View all posts by David →
This entry was posted on 5 March, 2022 in homepage. Bookmark the permalink.