‘Fuck You! We do what we want…!!!’ Jefferson Starship Live 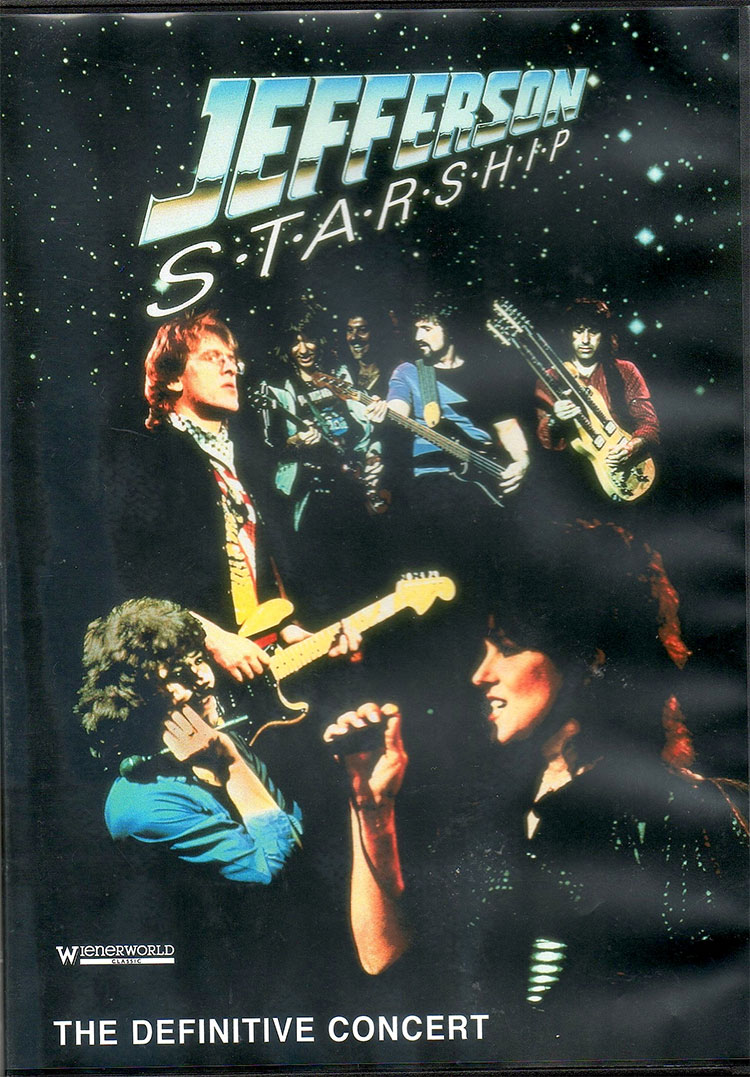 ‘THE DEFINITIVE CONCERT’ by

There’s spooky original Universal Films back-and-white footage snatched from the 1931 ‘Dr Jekyll And Mr Hyde’ movie used as part of the light-show for “Find Your Way Back”. Which is consistent. After all, Jefferson Airplane famously use a 1933 ‘King Kong’ clip for their live ‘Bless Its Pointed Little Head’ (1969) album, sampling Carl Denham’s ‘Oh no, it wasn’t the airplanes. It was beauty killed the beast’. So why is it, watching Fredric March’s hideous transformation from mild-mannered scientist into base monstrosity, that it seems more than a little wrong? Because what we’re watching is more psychedelic aristocracy devolving into… well, Journey. In the long devolution from Airplane’s Haight-Ashbury acid-Rockers to dull mainstream Starship, this 13 January 1983 Vancouver ‘Queen Elizabeth Theatre’ concert was documented towards end-point. ‘One of the biggest concert transmissions this side of Cassiopeia’ says Shortwave Mike. So, is there one precisely identifiable moment when a once-vital group loses credibility? When it’s possible to say, ‘this’ is the moment when the fantastic chemical journey all went wrong? Is it possible to pinpoint that tip-over shift?

Midway through yet another tediously long indulgent guitar solo, with Craig Chaquico’s annoyingly silly leather-trousered running-on-the-spot posing antics, Grace Slick leans across and says something inaudible to Paul Kantner, and he grins. What she says is lost, but I’m guessing it’s ironic. For this concert is like two bands uneasily welded together, a game of two halves, a beast with two brains.

After the counter-culture high-tide of ‘Crown Of Creation’ (1968) and ‘Volunteers’ (1969), Jefferson Starship was ignited as a temporary flag-of-convenience adopted by Paul Kantner for his sprawling spin-off Sci-Fi fantasia ‘Blows Against The Empire’ (1970) with its walk-on friends cast-list numbering Jerry Garcia, Mickey Hart, David Crosby, Graham Nash and Harvey Brooks of the Electric Flag. But those extravagant plans to highjack Earth’s first faster-than-light starship and set the controls for infinity and beyond were shelved and put on indefinite hold. The Jefferson Starship name was instead resurrected for the 1974 ‘Dragonfly’ album. This concert sequences Slick-Kantner’s “Ride The Tiger”, the driving single lifted from its track-list – ‘look to the summer, ’75, all the world’s gonna come alive.’ A marker, even though it charts no higher than a US no.84.

The album features a mixed-up confusion transitional line-up featuring Airplane’s writer-vocal triad of Marty Balin (“Caroline”), Slick and Kantner, as well as Papa John Creach’s hyperdrive violin, with ex-Quicksilver David Freiberg noodling on keyboards. He was there on ‘Blows Against The Empire’ and got sucked into the 1973 ‘Baron Von Tollbooth And The Chrome Nun’ album. Extrovert young guitarist Craig Chaquico, previously of Steelwind, had hooked up with Paul Kantner in time to play on ‘Sunfighter’ (1971) and would remain a mainstay of Starship. British bass-player Pete Sears was making his debut with the collective after a try-out on a track on the 1971 ‘Papa John Creach’ solo LP, he’d earlier been a member of cult Freak-beat groups Les Fleur De Lys and Sam Gopal’s Dream, whereas John Barbata – one-time drummer for Turtles joined Jefferson Airplane in time for ‘Long John Silver’ (1972).

The mid-to-late seventies was a prime time for complacent unchallenging guitar Rock. An album market established by late-sixties cultural and technological developments – with Jefferson Airplane’s ‘Surrealistic Pillow’ (February 1967) a vital ingredient in that evolution, but now gone safe and established. A mega-market consumer monopoly, carried on AOR FM-radio ‘no static, no static at all’, before downloads and file-sharing erode its ubiquity. Big bland albums, mannered and stylised, big hair, big grossing tours. Few of the surviving big sixties bands endure the period with credit. And Starship are painfully subject to its corroding entropy. Adjusting and fine-tuning the flight-log for less confrontational, more conformist times. Check out the audience, they are sensibly clean-cut, nothing subversive, one token Doors T-shirt worn as a heritage statement. When the mesmerising Grace contributes a spine-shivering acid-stoned version of “White Rabbit” plus “Somebody To Love” it’s as a ‘Classic Rock’ history lesson, like the Stones still doing “Satisfaction” or “Jumping Jack Flash” for the millionth time. That she makes them spit laser-bright fire is both testimony to her enduring vision, and to the strength of the songs themselves.

The sweetly bland “Jane” returns the group to the US Top Twenty, from the ‘Freedom At Point Zero’ 1979 album. By then Marty Balin had gone, replaced by slick poodle-haired co-lead singer Mickey Thomas. He’d sung “Fooled Around And Fell In Love” with Elvin Bishop, and seemed like a safe pair of hands… although he’d take the Starship spiralling into ultimate irrelevance. More positively, Liverpool-born Aynsley Dunbar, with a history taking in a stint with John Mayall, Frank Zappa and his own highly-rated Retaliation, replaced Barbata in the Starship drum-chair. And the album also boasts Paul Kantner’s face-saving “Girl With The Hungry Eyes” – ‘moving at the speed of light’ (‘Albert says I can’t, but I can’!). Punk was happening by then, it’s incendiary influence largely restricted to London and New York. It doesn’t touch the mid-west. The screen flashes up a collage of Punk images, Sting, Toyah, Japan, Mohawks. X-Ray Eyes. Grace bitches about people with spikes and studs, in generally approving tones. Airplane too had once been ‘forces of chaos and anarchy’. Incoherent voices yell from the audience, Grace strains to hear. She’d later flirt with New Wave elements on her own ‘Software’ (1984) electro-digital experiment. Meanwhile, someone passes her a small bouquet of supermarket flowers, she tries to stuff it down the front of her cleavage… and grimaces with exquisite discomfort.

“Out Of Control” is illuminated by riot-clips and nuclear-blast footage, one of a clutch of tracks lifted from their then-current 1982 ‘Winds Of Change’ album, with just a hint that Craig Chaquico’s slick double-neck playing and presentation is replacing anarchic energies (Don Baldwin replacing Aynsley Dunbar). ‘I have no mental problems – didn’t anybody tell you?’ gurns Grace, ending with ‘my whole life is…out of control’, delivered lying flat on her back on the stage. There’s NASA moon-walking footage spliced in with Egyptology for the title-track, then Kantner switches to keyboards for “Stranger”. ‘Got trouble with spiders?’ insinuates Grace, adding a ‘that’s nature, man’ arachnid biology lesson lead-in to “Black Widow”. While long-term collaborator and sometime lover Kantner comes alive on the rousing pell-mell too-much-monkey-business closer “Stairway To Cleveland”, a ‘chaos comin’ keep strummin’ slamback at their critics who ask ‘who dontcha sound like you used to in ’65, ’69, ’75?’, then picking up a newspaper and ranting from it about Ronald Reagan, three-hundred million dollars spent on missiles, and about ‘war in Africa, war in the Middle East, the Far East and the East East’. Grace defiantly reiterates his ‘Fuck you, we do what we want!’, which is not exactly the Yippie Situationist ‘Up Against The Wall, Motherfuckers’ slogan adapted by Airplane for “We Can Be Together”, but it satisfies a need for risk and danger.

There was to be one final flight – ‘Nuclear Furniture’ (1984), the last album to feature Paul Kantner, and the last to carry the Jefferson prefix. With Paul eased out, Mickey Thomas claiming on MTV that both ‘Kantner and David Freiberg were sacked’, he navigates Starship into a commercial wasteland. Two massive no.1 hits, Bernie Taupin’s “We Built This City” – ‘they call us irresponsible, write us off the page’ (Airplane had been called far worse!), and Diane Warren’s movie-theme power-ballad “Nothing’s Gonna Stop Us Now” – which are still airtime staples on ‘Heart UK’ – ‘listen to the radio’ indeed. The final get-out came around 1987 as Thomas began cold-shouldering his co-vocalist out of sessions, Grace telling me that ‘singing with the old broad clearly wasn’t his idea of the ultimate Rock band line-up.’ She felt it was a good moment to quit, and – finally dis-Graced, Starship vanished from commercial visibility.

This DVD documents the process, frozen into a single concert. Showing both halves of the Jefferson Starship mind jostling up against each other. The gradual encroaching blandness, with enough sparks to hint at what had been, and what might still have been, with a different script and an alternate cast. But whoever’s idea it was to interject comic cosmic broadcasts from a mock-up SF orbital module by ‘Shortwave Mike’ (aka MacDonald) with his alien buddy Spork, deserves to be ejected from the nearest airlock! His prime-time pirate station vidcasts get brought to a halt in the final sequence by the encircling patrol cars of the Copyright Police. Yes, Share A Little Joke With The World… 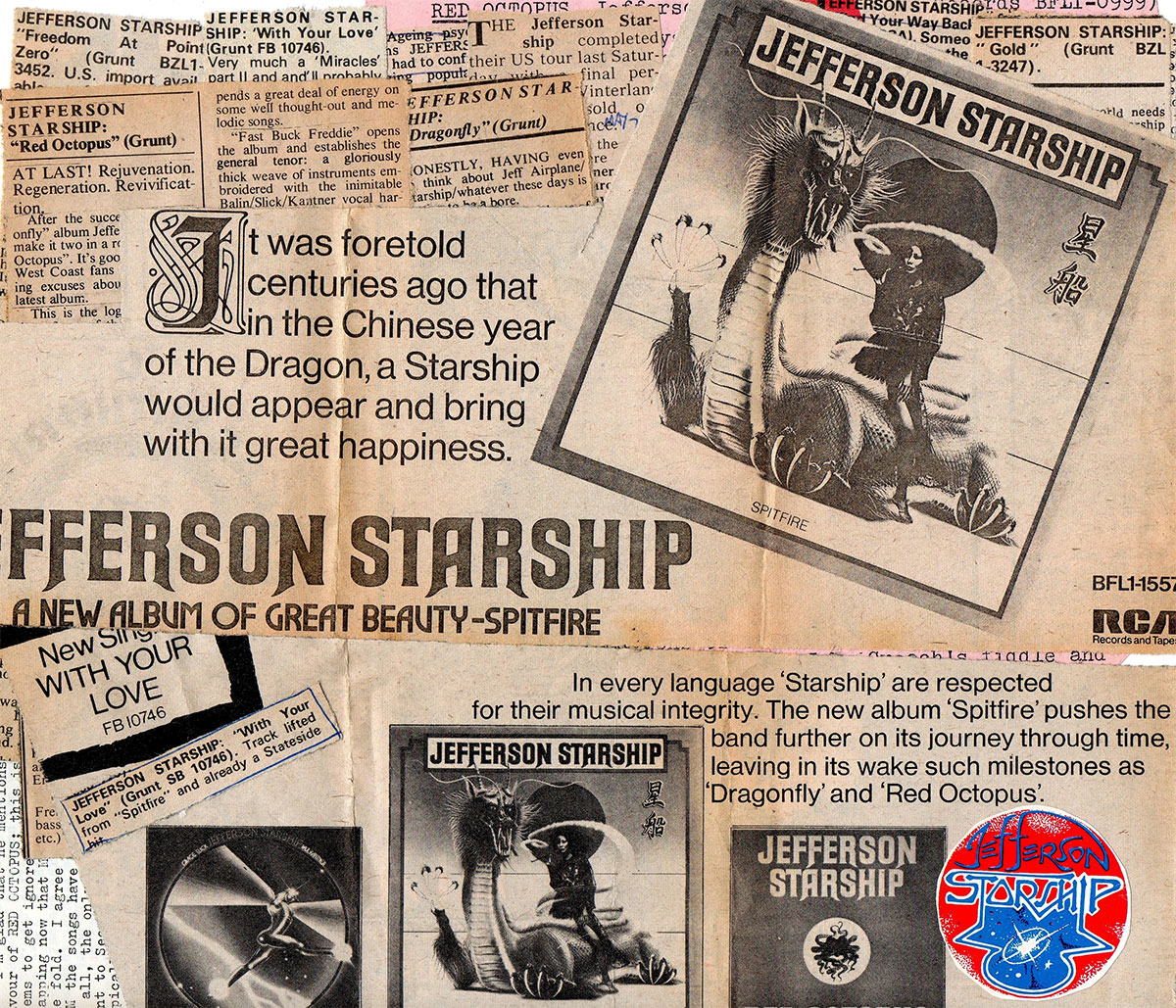 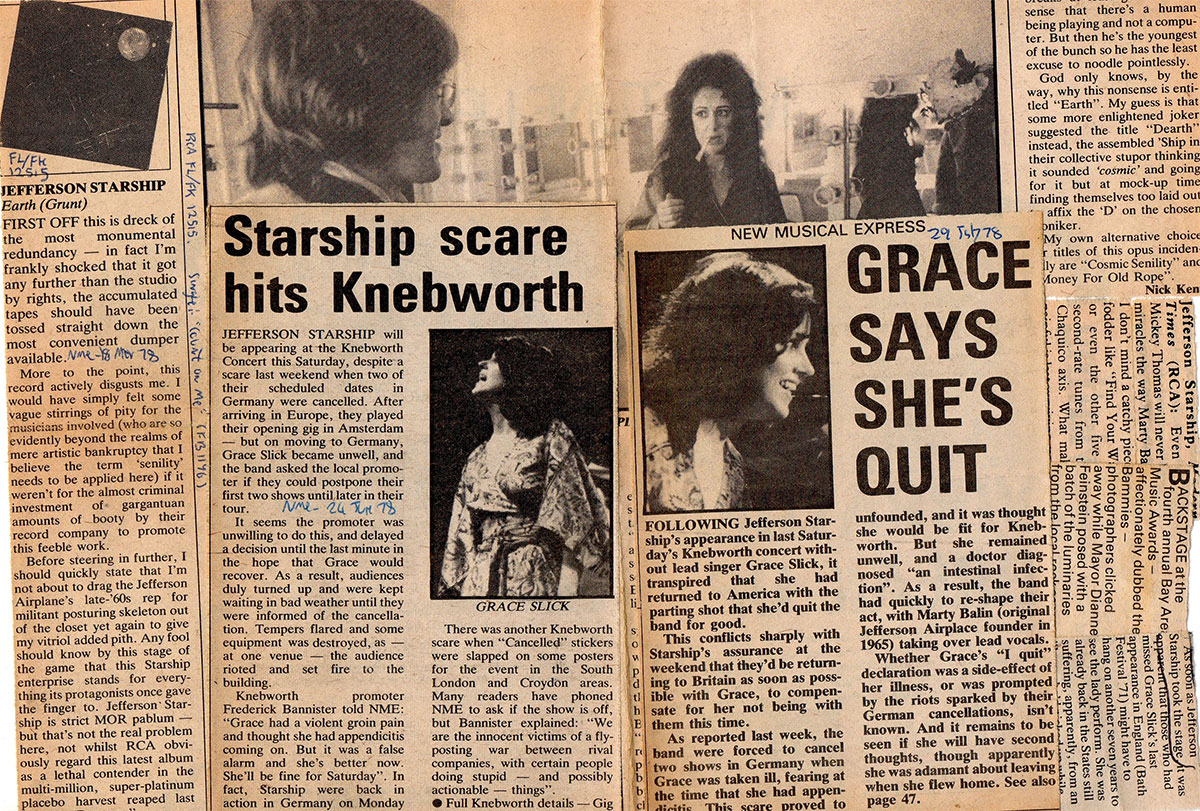 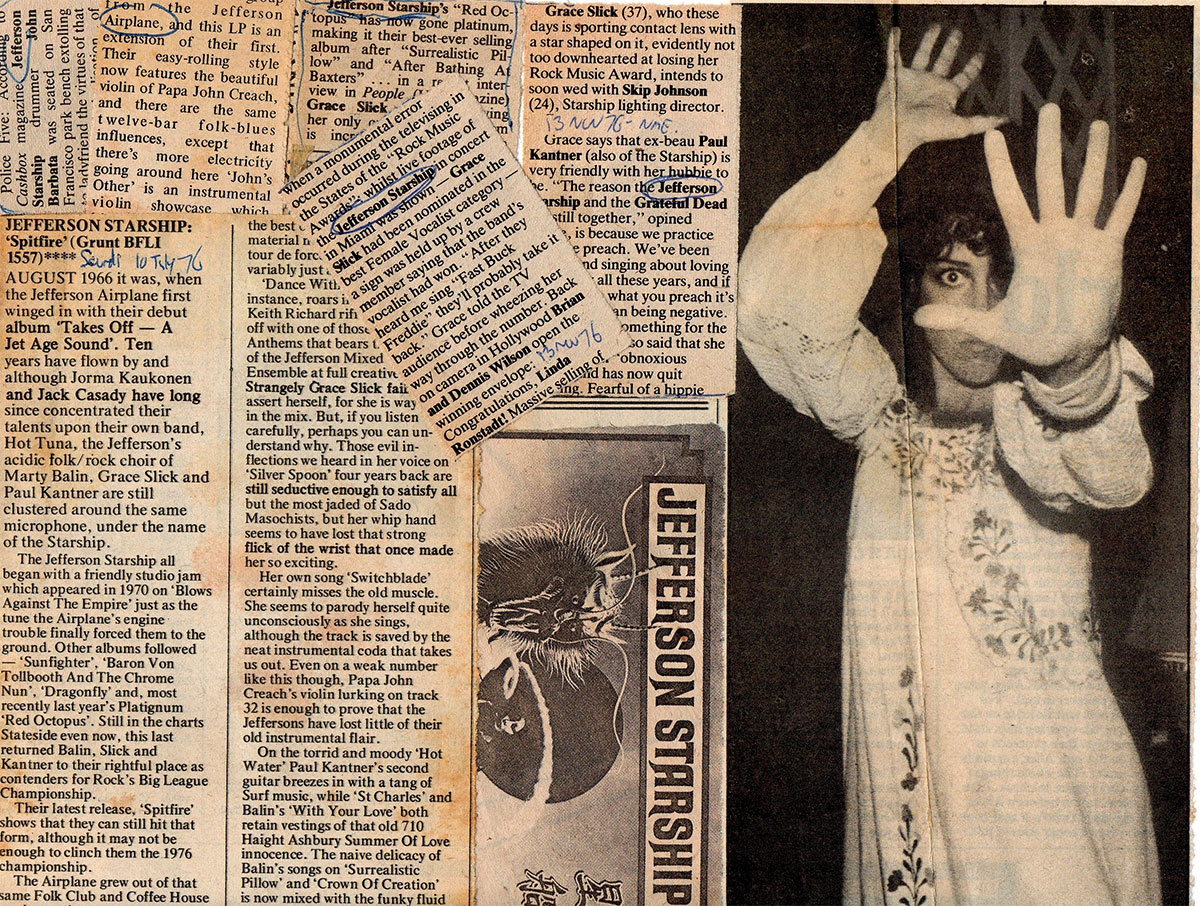