On a late December morning in 1890, a camp of Minneconjou Sioux families huddled around fires on the banks of Wounded Knee Creek when the cold silence of the Dakota Plains was shattered by the sounds of gunfire.

Without warning, a unit of the 7th U.S. Cavalry rode into the camp and slaughtered upwards of 300 Sioux. Women, old men, and children were defenseless against the bullets. Many of the dead lay on their faces and bellies, shot in the back as they fled. One can almost see the snow turn red.

An Oglala Lakota chief, American Horse, later spoke of the massacre at a Congressional hearing: “There was a woman with an infant in her arms who was killed as she almost touched the flag of truce, and the women and children of course were strewn all along the circular village until they were dispatched. Right near the flag of truce a mother was shot down with her infant; the child not knowing that its mother was dead was still nursing, and that especially was a very sad sight.”

He continued: “The women as they were fleeing with their babes were killed together, shot right through, and the women who were very heavy with child were also killed. All the Indians fled in these three directions, and after most all of them had been killed a cry was made that all those who were not killed wounded should come forth and they would be safe. Little boys who were not wounded came out of their places of refuge, and as soon as they came in sight a number of soldiers surrounded them and butchered them there.”

After a blizzard moved out, the bodies of the Sioux were unceremoniously gathered up and dumped in a mass grave.

Soldiers pose with three of the four Hotchkiss-designed M1875 mountain guns used at Wounded Knee. The caption on the photograph reads: “Famous Battery ‘E’ of the 1st Artillery. These brave men and the Hotchkiss guns that Big Foot’s Indians thought were toys, Together with the fighting 7th what’s left of Gen. Custer’s boys, Sent 200 Indians to that Heaven which the ghost dancer enjoys. This checked the Indian noise, and Gen. Miles with staff Returned to Illinois.”

The Wounded Knee Massacre brought bloody closure to one of the most violent eras in this country’s history—the Indian Wars. For decades, the U.S. government engaged Indian tribes of the West in a determined effort to open up lands for white settlers and to put an end to the “Indian problem.”

Revered leaders like Crazy Horse, Chief Sitting Bull, and Geronimo did their best to protect and resist the U.S. military. Chief Spotted Elk, leader of the Sioux camp, led his people to Wounded Knee to seek refuge following news of the assassination of Sitting Bull.

According to the U.S. government, the attack was prompted by a belief that the Sioux camp was stocking up weapons. But the Sioux said only a handful of their men were armed with rifles.

In fact, the military was on a mission to put an end to a practice known as the Ghost Dance. The dance was a prophetic ritual that would return the Sioux to their traditional homelands and would guard them against the threat of the whites. But the federal government was convinced the dance would lead to a bloody uprising, therefore putting whites in greater danger.

In comparison to the high number of murdered Sioux, twenty-five U.S. soldiers died. Most of these soldiers received the Medal of Honor. The National Congress of American Indians called for the stripping of these medals, but to no avail. The best the U.S. Congress could do is issue a 1990 resolution, an apology stating “deep regret” for the massacre.

The Wounded Knee massacre marked the end of decades of warfare with the U.S. government. In the short years to follow, American efforts to rid the country of the “Indian problem” turned to greater land theft, a ban of Indian religious ceremonies and forced assimilation of Indian children—placing them in military style boarding schools.

Today, the memory of the Sioux blood that was shed at Wounded Knee is essentially a footnote in American history. It was a different country in a younger time that led to the massacre, goes the conventional narrative. After all, total defeat of the Indians was 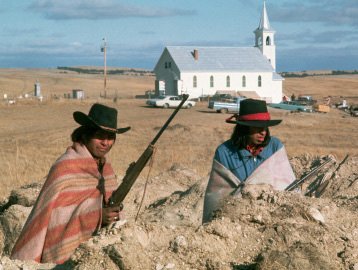 PBS
In 1973, American Indian Movement activists and residents of the Pine Ridge Reservation occupied the town of Wounded Knee, demanding redress for the 1890 massacre among other grievances. The federal government failed to make good on many of the promises that ended the siege, but the event succeeded in revealing Indians as a vital force in the country, despite decades of warfare and neglect. Still image from “We Shall Remain, Wounded Knee,” a PBS documentary.

But it was not a total defeat. American Indian resistance remains alive and active. In 1973, a band of young Indian protestors occupied a small church at Wounded Knee to bring to the world stage the continued abuse and mistreatment of the Indians by the U.S. government.

After decades and the sad loss of so many children to disease and homesickness, the Indian boarding schools system has been dismantled. Tribal governments have regained a significant measure of their sovereignty, the right to self-rule.

But the memory of the Wounded Knee Massacre serves as far more than a historical footnote for Indians. The tragedy is a living reminder that it is in the best interest of tribes to always remain suspicious of the U.S. government.

Tweet
This entry was posted on 19 January, 2019 in homepage. Bookmark the permalink.