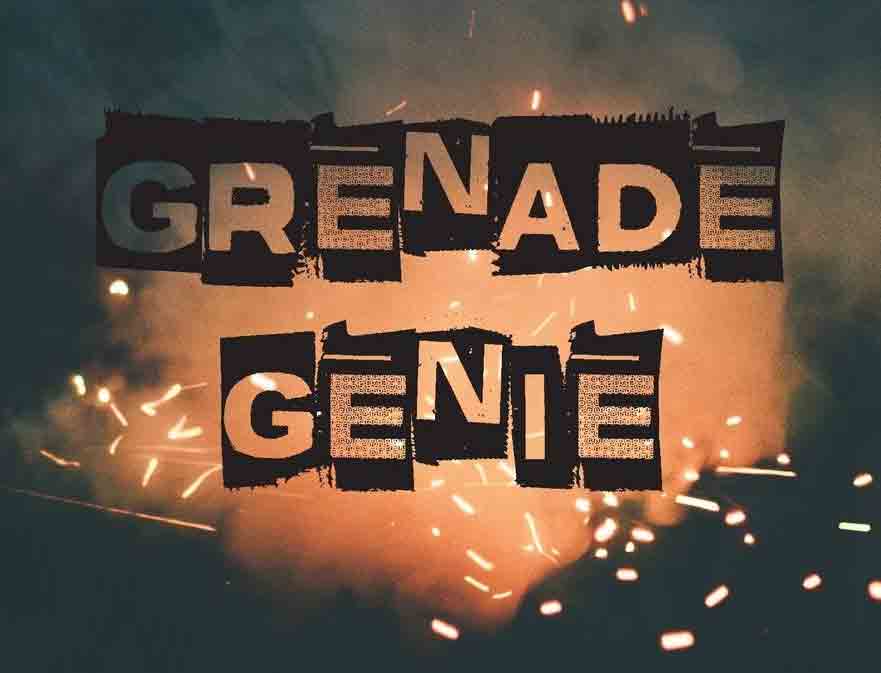 Possessing genius is one thing,

but are you prepared,

on finding it encased inside a grenade,

to pull out the pin to release the genie,

on the receiving end of the huge explosion?

In other words, are you prepared to be obliterated –

meaning you won’t even get to see,

above the billowing smoke,

the now-released genie granting every wish

to all your atoms that, dispersed,

and already forming into new but lesser versions of you,

will proceed to take all the credit you were due

as if you’d never actually existed,

as if the credit had always been theirs to take?

for everyone else’s sake but yours,

yet still the only kind of genius worth possessing –

the kind that changes everything:

It’s just that, if it turns out

you’re the one who pulls the pin,

there’s no guarantee you’ll even be remembered,

for only one thing is certain:

He knows that genius

is a combustible commodity;

he’s simply there to give out

all the credit indiscriminately.

that ends up in receipt of it

will, soon enough, be wiped out too,

when everyone least expects it,

in the unlikeliest place –

So, who knows, maybe it will be you:

out of luck and living in abject poverty,

with nothing to lose –

your possession of genius

amounting to nothing more

than the pulled pin held between your teeth,

and the self-belief that got you there…

…except that there, as it turns out,

is right in the middle of nowhere.

and though the explosion will mean

without you being, in any way, rewarded,

the main thing is that history will be made –

(who seemed, to everyone, unstoppable)

all taken out with just one genius-filled grenade.

And who knows? Maybe the day will come

when the atoms you released upon your death –

which, having congealed into lesser versions of you,

the genie bestowed all credit upon –

will, in gratitude, honour your selfless act

by placing, at the very spot

where you blew yourself up,

as round and blue as the Earth…

…the Earth, which, in billions of years,

the Sun will swallow up.

And that’s the thing

(why none of it really matters):

even the round, blue Earth –

along with your round, blue plaque –

must one day shatter into atoms too.

is nothing more than atoms.

Even the brightest human is nothing more

than the lowliest animal, organism

it doesn’t take a genius to work that out.

And though nothing matters

when we’re all just matter,

that people who think

they’re more than what they’re made of

are there to be brought down.

Even if that moment’s unplanned,

will always be on hand.

Trust me, somewhere, right at this very moment –

a moment borne out of desperation –

there’s another rat amongst the dinosaurs

about to pull out the pin with its teeth.

Thomas McColl lives in London. He’s had poems and short stories published in magazines such as Envoi, Iota, Prole, Bare Fiction, Rising and Fictive Dream, and his first collection of poetry, ‘Being With Me Will Help You Learn’, was published in 2016 by Listen Softly London Press. One of the poems from the book, The Chalk Fairy, was subsequently included in the Shoestring Press anthology, Poems for Jeremy Corbyn, and ended up getting quoted in the Evening Standard. He’s read his poetry and stories at many events in London and beyond – including Landing Place, Celine’s Salon, The Quiet Compere, Birkbeck Writer’s Room and Newham Word Festival – and has been featured on East London Radio, BBC Radio Kent and TV’s London Live. His second collection, ‘Grenade Genie’, is out now with Fly on the Wall Press.

Tweet
This entry was posted on 8 August, 2020 in homepage and tagged Thomas McColl. Bookmark the permalink.