In 1938, Grey Owl, a Native American environmental activist and popular public speaker died suddenly. Within weeks of his death, it was revealed that he was really Archie Belaney, a white man born in Hastings in 1888… 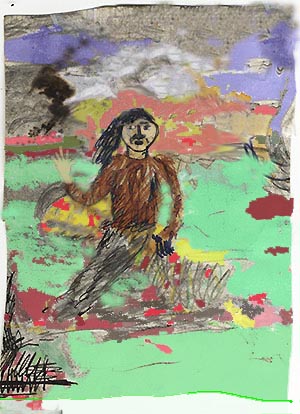 I remember boots.
Theirs. High buttoned. Dull.
His. Heeled.Tooled leather with shiny toe caps and I grabbed one of them just as he was leaving and they prised my fingers away and scolded me. He turned away then turned back and threw down his hat and said “Wear that when your head’s big enough and remember me.”
Then he was gone.
I never saw him again.
My name is Wa-Sha-Quon-Asin, Grey Owl and I come in peace.
They’d say I had his eyes and even when I won the Composition Prize at school, I was still my worthless father’s son.
And there was this woman used to watch me sometimes from a distance. I’d be alone, tracking buffalo through the park or hunting bears in our back garden and see her spying through the gaps between the trees. A small dark skinned woman. My mother.
Apparently.
But the two Aunts, my father’s sisters, kept her separate. She was The Other and not to be spoken of. So I’d stain my paleface skin with cold tea, stick seagull feathers in my hair, sit on the hillside above the old town dreaming buckskin, beadwork, braided hair and tragedy.
I left first chance I got. Nineteen-o-six. Travelled west. Landed up in Canada. I was supposed to be farming. Ended up at Bear Island, met and married Angele, moved in on what was left of the Anishinabe.
Old Lady Cat, my new Grandmother, told me their stories. White Bear, my new Father, taught me how to hunt and track. Go for days on chokecherries and pemmican.
I grew my hair; peppered my speech with phrases from their language. Walked toe-heel and leaning forward slightly as if the trump line was pressed against my head and I was pulling the weight of a laden sled.
Summers, I guided hunters (white men) and Wintered with the Indians.
They gave me my real name.
Nineteen-fourteen, I volunteered.
In France I was stone, dark light, a shattered tree, silent, hours unmoving, waiting for first light and the carelessness it brings. A yawning stretch above the dig-out’s lip…a head shot…one less Fritz.
I remember every face.
I was Belaney. A., Honourably Discharged Wounded Great War Veteran, Sniper First Class, bigamist who married a nurse from the Army Hospital then skipped off first chance he got.
Bear Island was more or less deserted. Trees hacked down. Rivers trapped out. Streams choked and dying so one night, drunk on home-made wine that had been brewed a full three weeks, burned my discharge papers, smeared the ashes on my white skin and headed back out again.
I killed beaver wherever I could find them: spent a lot of time alone in my cabin.
And then she came along.
Anahero.
A diner waitress sneered at, groped by drunken white men.
Together we left and every day, she watched me silently. Watched me track and trap and every time I killed, she would turn her face away as my axe fell on some half dead animal, leg  gnawed through by my trap and its own desperation until one day…
…until one day I was about to finish off two beaver kits, deep in the Winter, way out of season and she murmured one word “No!”
I never killed again.
Now, from back to backs, from under skies where yellow smoke curls in on itself, they fill every Lecture Hall from Southport to Hastings.
I stand on platform after platform, raise my right hand (I am Grey Owl, Shadow-Who-Flies-By-Night, Wa-Sha-Quon-Asin) and: One fine morning (I begin) crow noticed a shadow hooked to his foot so he tried to circle it.
Stalking.
(actions here, arms bent behind my back, elbows hooked out, palms touching)
But it stalked him.
(switch roles and in the spotlight, my feet lifting high and slowly like Chaplin)
So to shake it he’d take off suddenly and row halfway across the sky
(flapping my arms frantically and them laughing, some applause)
but wherever he landed, it was waiting for him.
Finally, at sunset, enraged, he pecked and clawed and caw-caw-cawed at the thing.
(more laughter, more applause, now they’re convinced)
But then the shadow came to life and simply swallowed him.
(laughter dies, the faint applause is scattered, echoing)
am your shadow
(they’re silent now, listening)
and when you come to me for sustenance, all I have to offer you is one green leaf.
I fill every Lecture Hall from Southport to Hastings and they come needing the buckskin, the beadwork that’s exquisite, my braided hair, my people’s inspiring tragedy.
I stand on platform after platform, white skin (the mark of Cain) stained with walnut juice, raise my right hand to repeat
My name is Wa-Sha-Quon-Asin, Grey Owl, and I come in peace…

Tweet
This entry was posted on 1 May, 2021 in homepage and tagged Kevin Patrick McCann, nick victor. Bookmark the permalink.