Guy Fawkes’ lantern was given to Oxford University in 1641 by Robert Heywood,
son of the Justice who arrested Fawkes on 5th November, 1605.

Is a surreptitious
Point of pilgrimage
For anonymous
Armies of anarchists who
Visit the glass case
Where it is preserved
In the Ashmolean
Museum, Oxford.

‘What if?’ they wonder,
‘What if Guy Fawkes had done it?
‘Had done the business –
‘For what’s changed?’ they ask,
‘Kings and Parliaments spend tax
‘On wars no one wants.
‘There’s still a Monarch,
‘Most of whose Parliament
‘Is unelected.

‘Twenty-six Bishops
‘From the national religion
‘Sit there as of right.
‘The Invisible
‘Sky Wizard has favored them
‘Over other cults,
‘And eight hundred Lords
‘Outnumber all the elected MPs,
Making voting meaningless.’

Boisterous voices
Then frighten the life out of
Japanese tourists:
‘Guy Fawkes, Guy Fawkes, t’was his intent
To blow up the King and Parli’ment.
Three-score barrels of powder below
To prove old England’s overthrow.’ 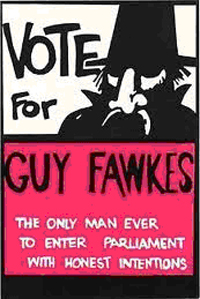 With 792 members, the House of Lords is the only second chamber in the world which is larger than its first chamber. The elected House of Commons has 650. The only other State legislature which includes representatives of its state religion, as of right, is Iran.

View all posts by Heathcote →
This entry was posted on 15 May, 2013 in homepage and tagged Ashmolean Museum, Guy Fawkes' Lantern, Heathcote Williams, Robert Heywood. Bookmark the permalink.