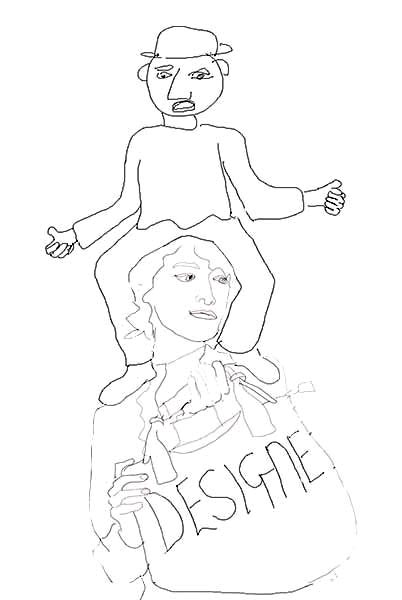 Cultural myths are welded into the bedrock of the common view.

Over long periods the superficial reaches of a culture change but the deeply held and unexamined myths hold fast their place in the conceptual gene-pool of the collective, while to question some of the more preposterous of them can bring laughter upon the head of the questioner.

Light slants dazzlingly through the fronds of a tall palm-tree. Beneath the shade of its broad leaves Johnny Banana Head sprawls in a cane chair. Before him a small table of similarly modest construct upon which sits an icy glass of orange juice, while opposite, a scruffy looking man called Smith is similarly ensconced. However, the tropical seas are far away and the closest they are to any large body of water is probably Southend or Clacton, for the graceful palm is rooted in a large pot which adorns the sunlit atrium of a shopping-mall where they sit having coffee.

Around them throng many lady shoppers, their high-heeled stilettos clacking like castanets on the faux-marble floor and their bags flaunt the emblems of multiple commercial enterprises.

‘Do you see the trap their caught in?’ asks Smith.

‘Well it’s a subtle part of the advertising industry,’ replies Smith. ‘The ladies like to boast about where they buy: Gucci, Saint Laurent, blah, blah, etc., and the industry exploits that weakness and in doing so gets a lot of free advertising on their logo’d bags.

‘It’s all so weird,’ says Johnny, gazing around at the multi-coloured display of top-shelf shopping bags, each flaunting its original and sophisticated design, as if competing in an  exhibition of the latest in retro anti-Post-Modernist art.

‘What do you mean ‘human nature’ asks Johnny.

‘No we’re not,’ says Johnny. ‘The word “human” is very suspect and a complete misnomer.

‘How do you mean,’ asks Smith.

‘The word “Man,”’ begins Johnny, ‘is the name for our species which emerged in most parts of the world; man – mani etc. In that pre-historical world there was only one gender, “Man.” We were all men; there were just two different kinds of man; Hu-Man and Wu-Man. These two kinds of man were differentiated only by slight biological quirks, but the mind of both female and male where considered to be of the same order, and there was a cultural equivalence and respect between the two. However, the female soon earned her lesser status owing to the fact that when pregnant she was unable to run and thus became, to a certain extent, dependant on the male.

‘Exalted by this naturally occurring power and his new found status the male founded patriarchies, and in his sublime narcissism gave his own name, Hu-Man, to the whole species, and reserved the species name, “Man,” solely for himself, and thus in his own eyes raising himself to a position  of quasi-deity. Meanwhile the female, without such powers, was left with her original title, Wu-Man.’

Johnny sits back and waits for Smith’s response to his theory, but Smith is still trying to get his head around it. It sounds entirely convincing as an argument, but whether it would catch on is another matter. Noticing Smith’s dubiousness Johnny plunges on.

‘So you see, strictly speaking you and I are hu-man but they…’ and he gestures towards the throng of eager-eyed ladies, ‘are wu-men.’

‘Well you won’t find many followers for that one,’ says Smith.

‘Some theories,’ says Smith, ‘however plausible, are so far from the norm that people automatically regard them as mad, or make some obscure connection with Father Christmas.

‘But it has impeccable logic,’ protests Johnny, ‘give me a better reason for those peculiar names.’

‘You’re barking up the wrong tree,’ points out Smith. ‘It’s not the truth of the theory that counts, it is it’s proximity to the norm that rules the game, and if it’s too far from the habitual view they will, at best, just laugh.’

Johnny looks deeply troubled by this.

‘Look,’ says Smith. ‘If you think that people will seriously examine your proposition, then that is the last tree you should bark up. The theory so fundamentally undermines the status-quo that they have no recourse but to consider it completely mad. Having judged it as mad, they cannot then seriously examine it, for to do so would be tantamount to admitting that they were mad themselves.

‘Well if good logic isn’t acceptable – what is? says Johnny.

‘That’s what everyone wants to know,’ says Smith. ‘But nobody has hit the jack-pot yet, so it well might be that there is something wrong with the question; it might in fact be unanswerable within the limitations of linguistics, and needs an entirely different kind of language.’

‘That isn’t what I meant at all,’ says Smith.

Tweet
This entry was posted on 1 August, 2013 in homepage and tagged Cultureal myths, dave tomlin, nick victor. Bookmark the permalink.