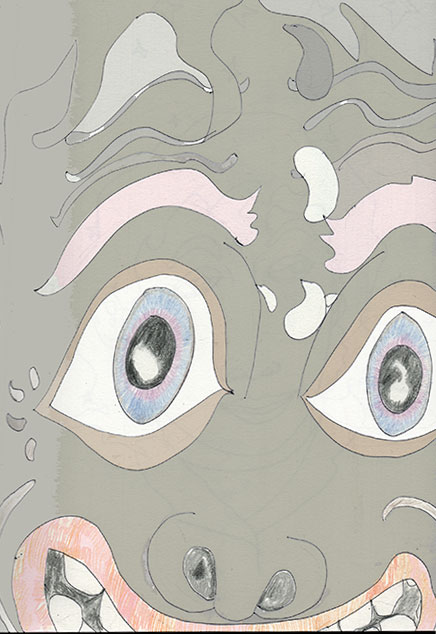 I dreamt you were on a sinking rowboat with three of your childhood friends
(you lunged at them the pestilent cursor of a spear and threw their draining
bodies overboard). I was pretending to be comatose under the hail smashing
into the glass ceiling, trying to stay still as each movement of the frangible bones
in my putrefying body sounded like the rasp and hiss of driving in snow, and wishing
I wanted gainful things in life like for my psyche to work like a machine, unpolished
politics, ambiguous anarchy, and for you to be a good person, but I somehow only wanted
idle things then, like a collection of used postcards from the interbellum, a 1972
Citroën DS Pallas, and for the glass to shatter and tear open my skin so that the hail
may enter me, instead of I it.

By Stephanie Luka
Stephanie Luka was born in 1997 to a Dutch mother and a Congolese father. She discovered her fascination with the arts only after quitting her career as a professional gymnast and entering the University of Amsterdam at the age of sixteen. Her work emanates mostly from dreams; it strives to acknowledge and interpret these fragmentary, illogical shards of truth, and to (re)construct them in a way that fabricates considerable lucidity and relevance without repudiating the ambiguities present. Stephanie is featured in the debut print issue of Allegory Ridge, and has forthcoming publications in Dissonance Magazine, The Metaworker, and Visitant Lit.

Tweet
This entry was posted on 17 January, 2018 in homepage and tagged nick victor, Stephanie Luka. Bookmark the permalink.