Posted on 5 September, 2013 by DaveTomlin 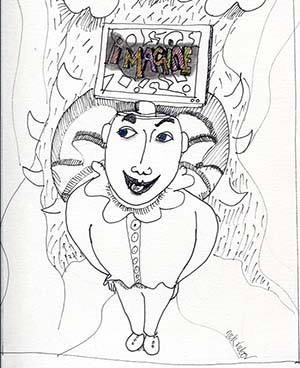 It might be said that the dangers into which a culture can unwittingly slip are very subtle, and  occur by such small increments that they pass barely noticed.

However, joining up the dots which they leave in passing reveals a gradual depletion of man’s most precious endowment: Imagination.

Given the present milieu of electronic distraction, such depletions are not noticed against the glamorous background coercions of the media, and the mass hysteria of consumerism.

One example of this creeping depletion is as follows:

The Book:  A printed cipher which requires a mentally active involvement to process.

The voice-tones of any characters must be supplied by imagination. The colours too engage that faculty as do the imaging of circumstantial events.

Radio:  Here the voices can be heard and therefore imagination is not, in this instance, required, although it is still needed for colour and for circumstantial detail.

TV/Film:  In this medium imagination can close down, since all these elements are supplied (according to the inclinations of the directors) and the involvement is, as far as the imagination is concerned, entirely passive.

Any human faculty which remains unstimulated and thus deprived of a function becomes susceptible to atrophy, leading to extinction, a syndrome increasingly to be noted in our contemporary culture which has entirely sold itself out to the entertainment ‘industry’ and its ‘user friendly’ products.

A society governed by the rigid and Philistine laws of popular consensus may come to regard a faculty that has fallen into disuse as an embarrassment to be hidden; a shamefully retrograde and repulsive throwback; or a taboo to be treated with contempt and stern disapproval, leaving the unfortunate artist exposed to ridicule and to be justifiably admonished with:

View all posts by David →
This entry was posted on 5 September, 2013 in homepage and tagged cultural darkness, dave tomlin, imagine, nick victor, turn off tv, turn on. Bookmark the permalink.