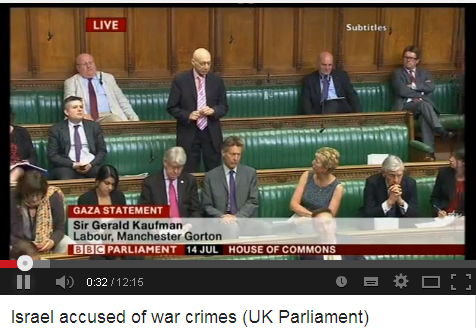 Highlights from a UK parliamentary debate in which MPs variously accused Israel of war crimes, disproportionate violence, ruining peace negotiations by building illegal settlements, running the worlds largest outdoor prison, collective punishment, and attacking water supplies, hospitals, supply centres and all manner of other civilian targets. I have edited out the contributions of Foreign Secretary, William Hague, because nearly all of them displayed a shameful lack of compassion for the sufferings of the Palestinian people (Hague is a prominent member of an organisation called the “Conservative Friends of Israel” and is well aware of the funding that involvement brings to his party and his own political campaigns)
The debate took place on the 14th of July 2014

The cowardice at the heart of our relationship with Israel
Peter Oborne
The Telegraph, 12 December 2012