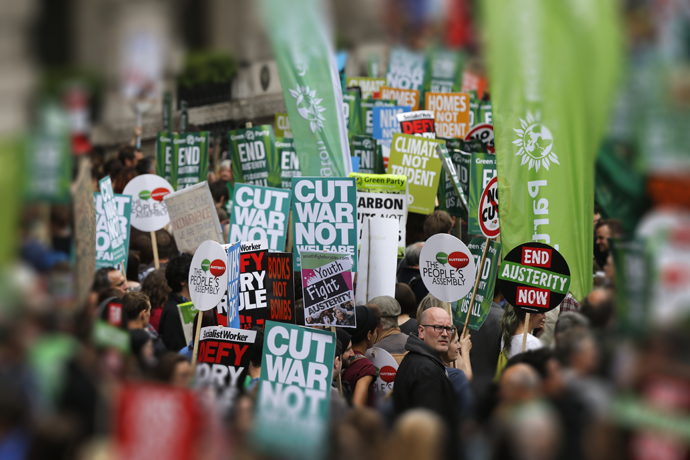 In truth, nobody knows how many people marched for miles through London on Saturday afternoon to demand an end to austerity. The People’s Assembly, the group that organised the protest, claimed that up to a quarter of a million took to the streets against the government’s vicious cuts to welfare and public services, not including demonstrations the same day in Glasgow and Liverpool. Others put the number in London between 70,000 and 150,000. It’s anyone’s guess, because the people’s march against austerity was far too big to count: by the time the head of the column reached Westminster, its tail was still trailing through the City.

The most remarkable thing about Saturday’s march was its diversity. With the regular Class War and socialist factions went groups and individuals from across the country: students and pensioners, nurses, teachers and lawyers, goths and Hari Krishnas, anti-nuclear and anti-fracking campaigners, trade unionists and politicians, disabled people and celebrities. The weather was grey, but spirits were high. When a blimp attached to a union fire engine successfully squeezed under a viaduct at Blackfriars, everybody cheered. This was different, said some regular London activists, from anything they’d seen in a long while. ‘Middle England marches against austerity’ was the Guardian’s headline.

There were a few little incidents. A group of ‘black bloc’ anarchists broke away from the main A-to-B route and took a detour along the South Bank, man-marked all the way by blue-capped riot police. There was a piddly little blaze in Parliament Square that took ages for the police to put out (‘How many cops does it take to piss on someone’s bonfire?’). Otherwise, hopes and fears for a breach of the peace were disappointed. There’s a time and a place to smash shit up, and this wasn’t it – though that didn’t stop the police from standing guard at the Savoy hotel and several bank branches (as if to remind everyone whose side they’re on). They even put a big wooden box over one of the war memorials on Whitehall.

So, no violence – but that wasn’t for lack of rage. The crowd were peaceful, but mad as hell. ‘Cut warfare, not welfare!’ ‘Blame bankers, not immigrants!’ ‘One solution: revolution!’ ‘Austerity kills!’ ‘Defy Tory rule!’ ’Fuck the fucking fuckers!’ The words varied, but the message was obvious: righteous anger, and the desperate need for an alternative to the government’s narrative of austerity.

Where might that alternative be? With so many people marching against the Tory government, you might have expected a decent showing from the Labour party – but Her Majesty’s Opposition were almost nowhere to be seen. Of the four candidates currently running for Labour leader, only one – the socialist Jeremy Corbyn – made an appearance at the biggest anti-government protest in years. As urbane voices from Labour’s right wing call for ‘modernisation’ and ‘aspiration’, activists across the country are deserting the party in droves. No wonder, when three out of four candidates won’t even show up to oppose the government’s dogged persecution of Britain’s young, poor, sick, disabled and disadvantaged. (‘If Corbyn becomes leader, I might give Labour one more chance. If it’s Andy fucking Burnham, then I’ve had it.’)

And while Labour are locked in a succession crisis, the Tories are pressing ahead with their cuts. In what smelled strongly like a two-fingered salute to the protestors, Iain Duncan Smith announced the very next day that the government would proceed as planned with £12 billion of welfare cuts, due to be set out in an emergency budget on July 8. (The People’s Assembly are already planning a nationwide protest that day.) The cuts, Duncan Smith claimed, were an attempt ‘to return the system to sanity’. This is the language of balancing, restoring, fixing: the same language that the Tories have used to justify their austerity measures since they came to power in 2010.

So, to end, a brief word on this thing we call ‘austerity’. In a certain light it seems incredible that a hundred thousand ordinary people would take to the street to oppose something so… nebulous. Why would anyone march against an economic buzzword?

We marched because – despite the stories spun by the media, the weight of corporate interest and the capitalist consensus that so often seems inevitable – it’s becoming clear that austerity is a damned lie. The government’s cuts have precisely nothing to do with balancing the books, tightening belts or even (to drop those misleading clichés) reducing the deficit. (In fact, the national debt has grown more under five years of George Osborne than under 13 years of Labour.)

We marched on Saturday under no delusions. The truth is that austerity is not a painful necessity but an ideologically motivated economic strategy, specifically designed to concentrate wealth in the hands of the already wealthy. And the lie may be starting to crack, as it already has in Greece and Spain. ‘The austerian ideology… has collapsed,’ writes the economist Paul Krugman, ‘to the point where hardly anyone still believes it. Hardly anyone, that is, except the coalition that still rules Britain – and most of the British media.’ Or as one of the more poignant placards on Saturday put it: ‘So much suffering for an economic myth.’