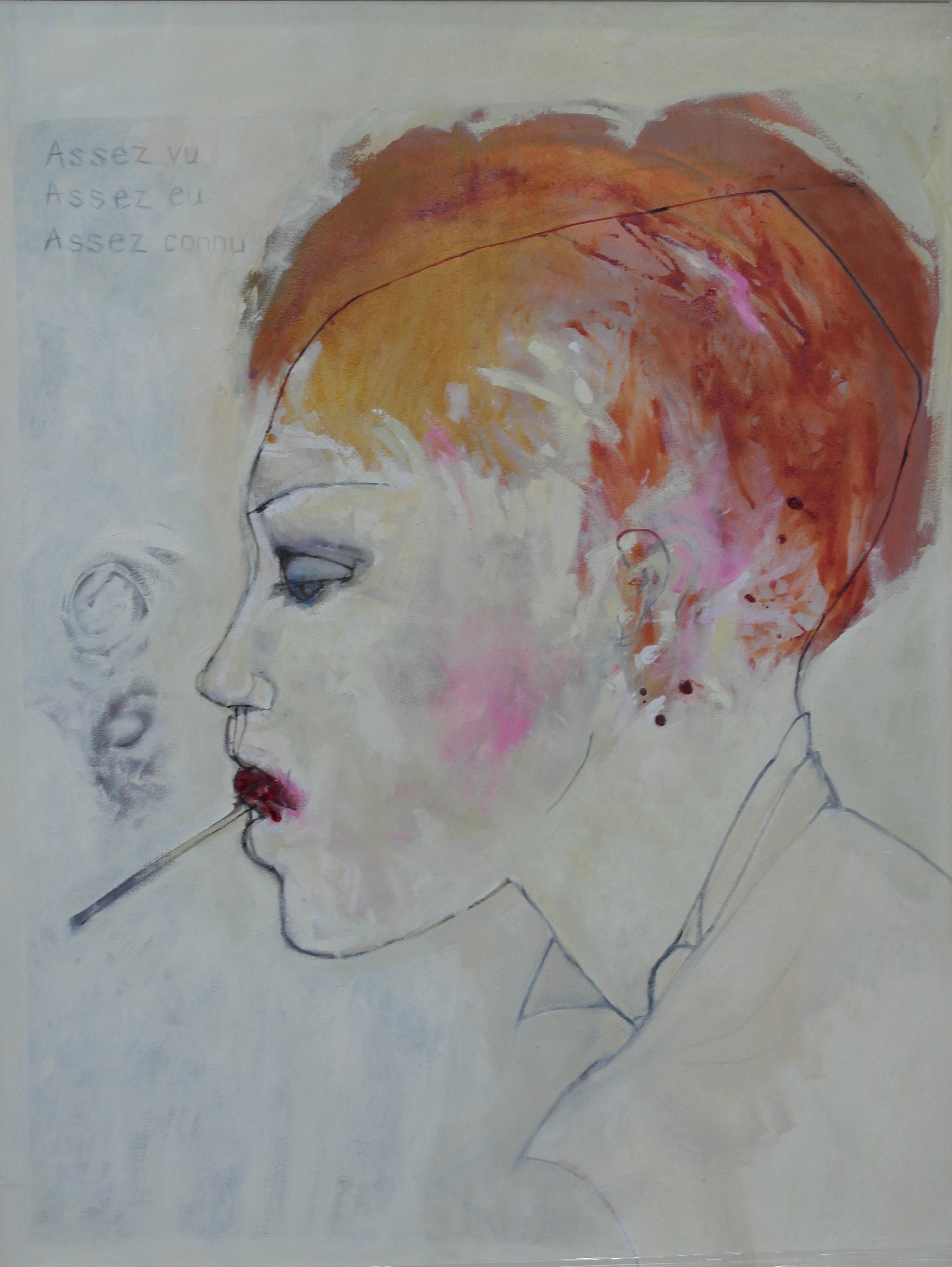 G Force and the Politics of Art: For three decades the Guerrilla Girls, the feminist art collective, have been shaking up the art world with their unique brand of theatrical activism. But how does that translate to female artists working their canvases today? Saira Viola talks Rimbaud, racism and rebellion to one of Britain’s best female artists Karen Strang.

S.V. From the bikini to the boardroom: now more than ever women use their face and bodies to further careers, enhance their earning potential and create a better lifestyle for themselves. T and A – is it all empowering or an easy way to still objectify and devalue women judging them solely on their looks?

K.S. Naomi Wolf’s Beauty Myth is a good starting point. Coming of age with the inequality of the 1970s, we celebrated our body hair as an antidote to the preening objectification of women (check out the Patti Smith “Easter” cover). I find it rather strange that many women now shave their pubic hair. Women of course have the right to fetishise their bodies for their own sexual pleasure. However I find it hard to believe that the majority of women are doing this for that reason. It seems there is a correlation of idealisation and consumerism.

S.V. Burka or Bikini? Shouldn’t women be the ones to decide!

K.S. Women should always decide about our own bodies, just as every individual should have self-empowerment. There is a dangerous line between what is absolute free will and what is pressurised by social mores.

S.V The art world is very much part of the good ol’ boy’s network of society, do you think gender inequality in the art industry will ever change ?

K.S. I take issue with the word gender, as it often appears to have some taken-for-granted status. Gender is a social construct of society which in turn is a man-made form of oppression. It is without doubt true that traditionally in positions of power having a penis helps, though things are changing. When I was a student the oft-quoted “paint with your penis” was not always said with irony. We also have to be careful not to fall into the trap of creating a new elitism which may well be governed by women but disregards the economically and culturally marginalised.

S.V. Who has been or is the most defining influence in your work ?

K.S. Influence seems to be the flipside of inspiration; the B-side. Inspiration is the driving force. Any number of courageous individuals can tick that box.

S.V As an artist of Polish origin, how do you feel about the recent spate of racist hate directed towards some members of the Polish community post Brexit?

K.S. Obviously very sad. Xenophobia comes in many guises. The physical brutality of what is happening now is clearly disturbing, However the white kid-gloved approach that my mother was served up in the early 60s is as insidious. “British” middle class mores are just as discriminatory and bullish, only the scars aren’t physical.

S.V. As a female artist, recipient of numerous awards and a self professed flaneuse, have you ever felt you have been a victim of inequality?

K.S. Despite having been fortunate enough to have some awards my determination to explore what’s under the radar leads to a voluntary marginalisation. Growing up in the 1970s I was very much persuaded to fit a certain typecast befitting my sex, which I railed against, and was lucky to grow up in the punk generation. Coming of age then was actually a positive turning point. It was a time of activism on various levels from Rock Against Racism to gay rights. Sadly our society goes towards a normative whereby consumerist appeal negates the true voice of liberty and replaces that with looking for new consumerist markets which suppresses the real project of change.

S.V. Do you have a favourite groove as you sketch the hours away?

K.S. I don’t always paint to my favourite music. For example Nico’s Frozen Borderland is intensely visual in its own terms and could crowd out my own creativity. I generally have Radio 3 on. It tends to be serendipitous. I’d love to have rattled off a long list of female composers but I guess that would be disingenuous. However I’ve recently been introduced to Daphne Oram’s music, one of the real mothers of invention. She along with a number of female electronic musicians have been overlooked until recently, but their contribution to contemporary sound art is crucial.

S.V. Tell us about your recent solo show Illuminations 1874.

K.S.. I have been intrigued and inspired by Arthur Rimbaud since my teens. My political awakening corresponded with my cultural awareness and since then I have always connected art with politics. Rimbaud defines that particular rebellion against authority by creative means. What intrigues me particularly about Rimbaud is that after much research I am persuaded that he could not have been biologically defined as wholly male but expresses traits of hermaphroditism in his work and life. And the other intriguing aspect is his disappearance in the latter half of 1874.

The exhibition included a series of large-scale portrait paintings and was one of my most challenging projects because it was less about the material of painting but rather using the paint to develop a forensic investigation of Rimbaud’s identity.

S.V. You’ve captured the visual language of Scotland’s natural beauty in your Forthscapes collection. How important is nature to you in your work?

K.S.  It is a fundamental component of understanding the world in human terms. The patterns within nature repeat on various levels. Nature’s power and energy are celebrated by the emphasis on the way it reclaims the land that humans have attempted to bank or contain, hence the series of flooded fields, overflowing the liminal.

S.V. Some of your work has the ability to unnerve and disturb. Do you consciously set out to convey specific messages within your work?

K.S. Not entirely. I search for the conduit. What starts as straightforward generally evolves into dark areas of shadowplay on which I embark subconsciously. In Wanderland/Darkland, on a superficial level, the child in these pictures represents me but I am using myself as a cypher. It is true that the locations are real and that the figure is real. What happens when they are juxtaposed is not predictable. Sometimes the figures appear empowered and other times they appear lost, but I never know which way it will go.

S.V. Picasso said: Art is not made to decorate rooms. It is an offensive weapon in the defense against the enemy. La peinture n’est pas faite pour décorer des appartements. Do you think art can be a weapon for social change?

K.S I don’t do pretty and I don’t do easy. And that goes for my art as well! I am particularly proud of an accolade from the first Glasgow Art Fair in the late 1990s where my work was reviewed as “the most unmarketable”. Indeed, I was giving the work away. This work was created over a period of two years when I developed a persona called Psychohousewife in which I transformed myself physically and to some extent psychologically into a stay-at-home mother who obsessed over domestic affairs. As performance, I took my trolley-load of cunt and tit cakes and tried to foist them on the general public in different locations. Interestingly, most men shied away from the cunt cakes but were happy to eat the tit cakes… To get back to Picasso, a master of the disassociated female form, my little version of anti-consumerist art was about abstracting the female body into something that could be consumed for short-term pleasure.

S.V. And finally what advice  would you give to emerging artists?

K.S. Don’t be scared of anything, but avoid unsolicited advice. Have courage to explore what is in the shadows, not just in the light. Chiaroscuro is the dynamic of expression. 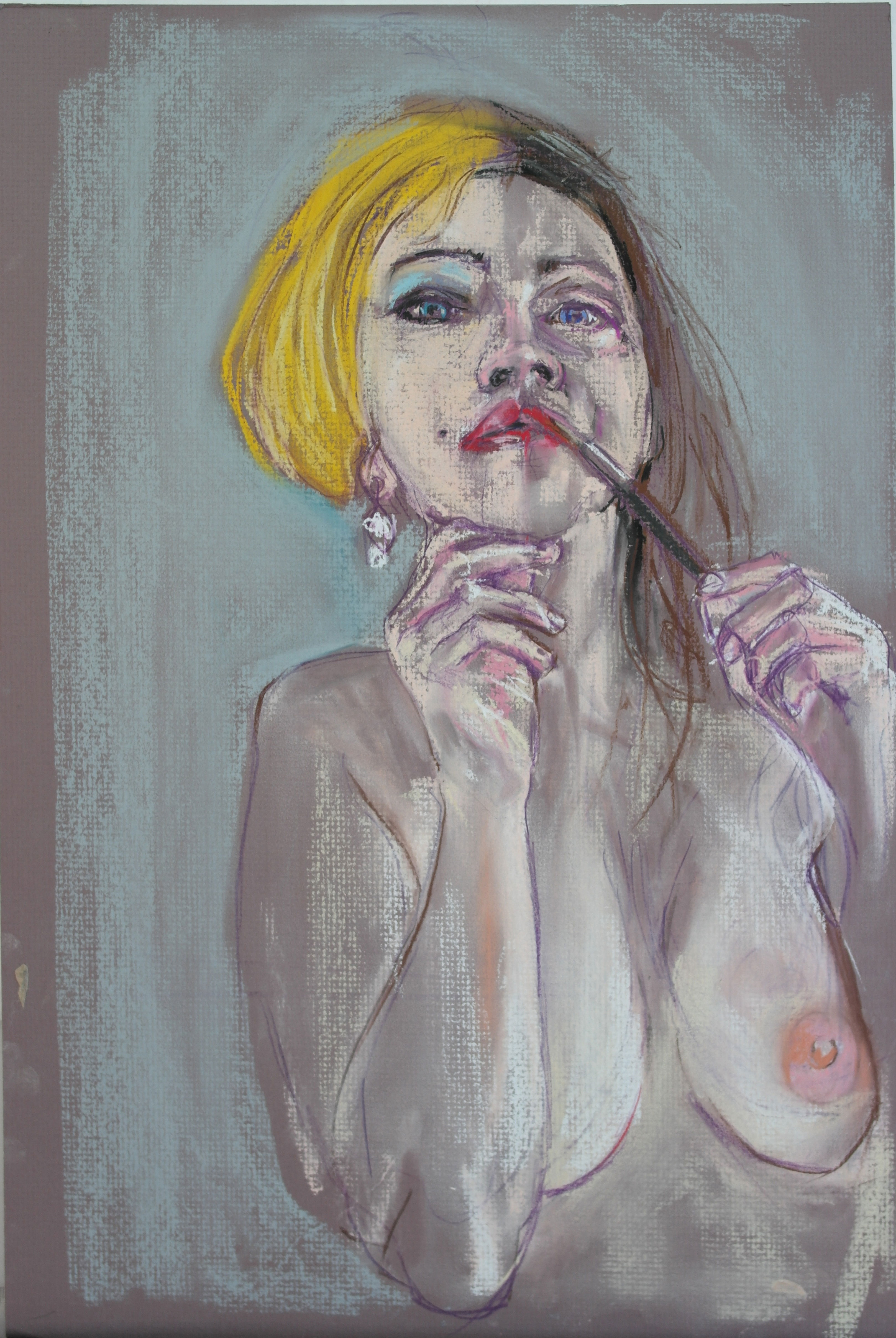 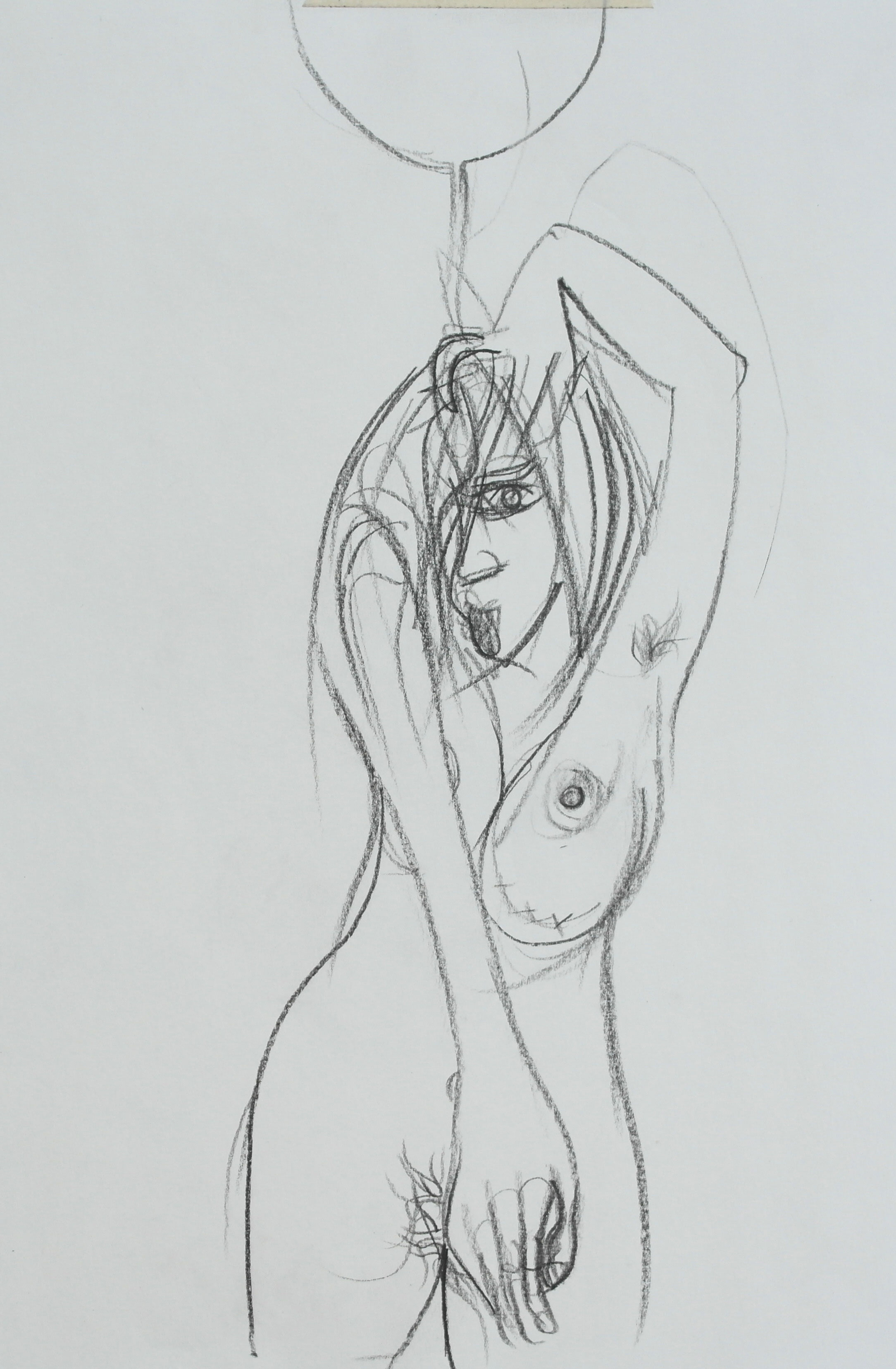 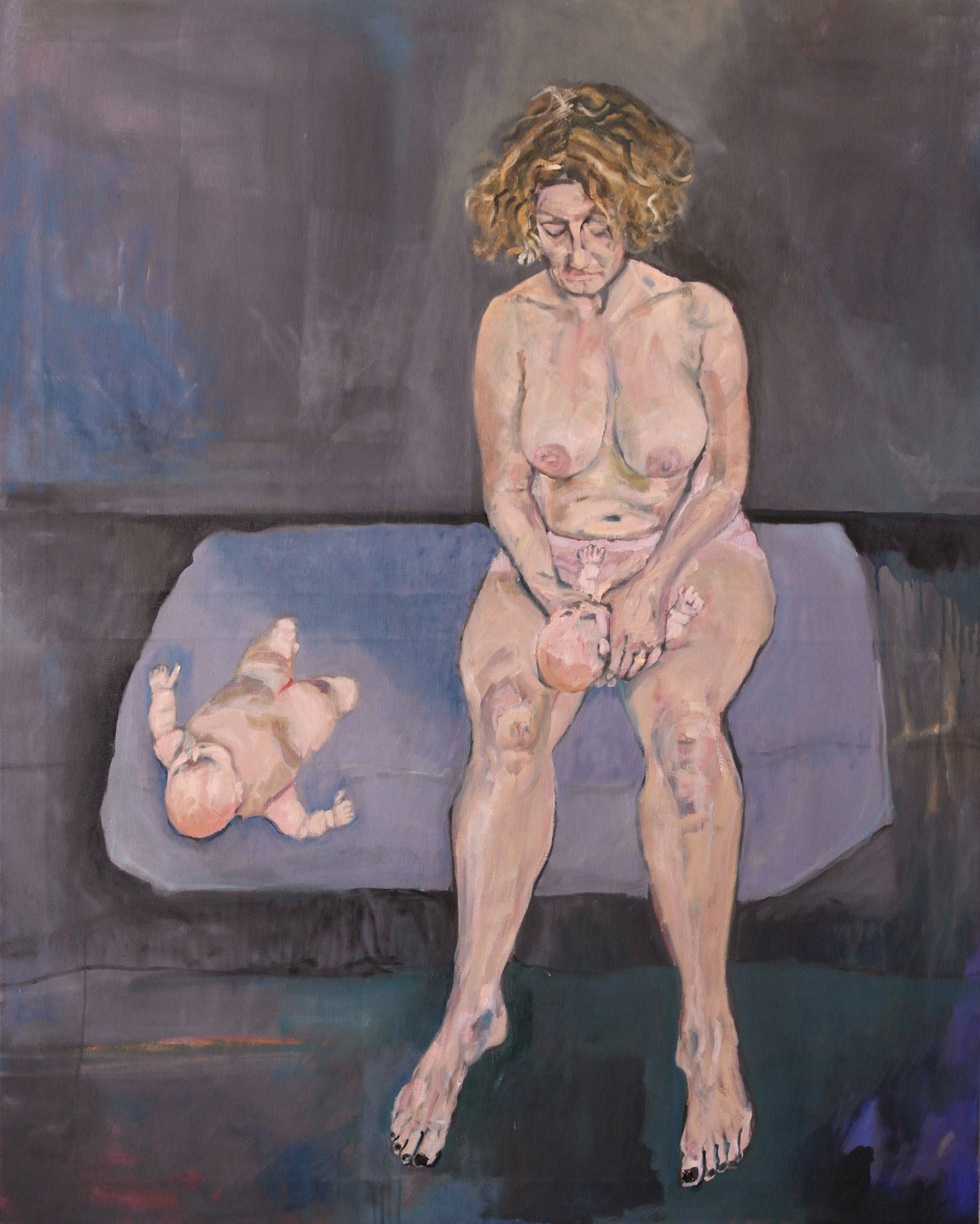 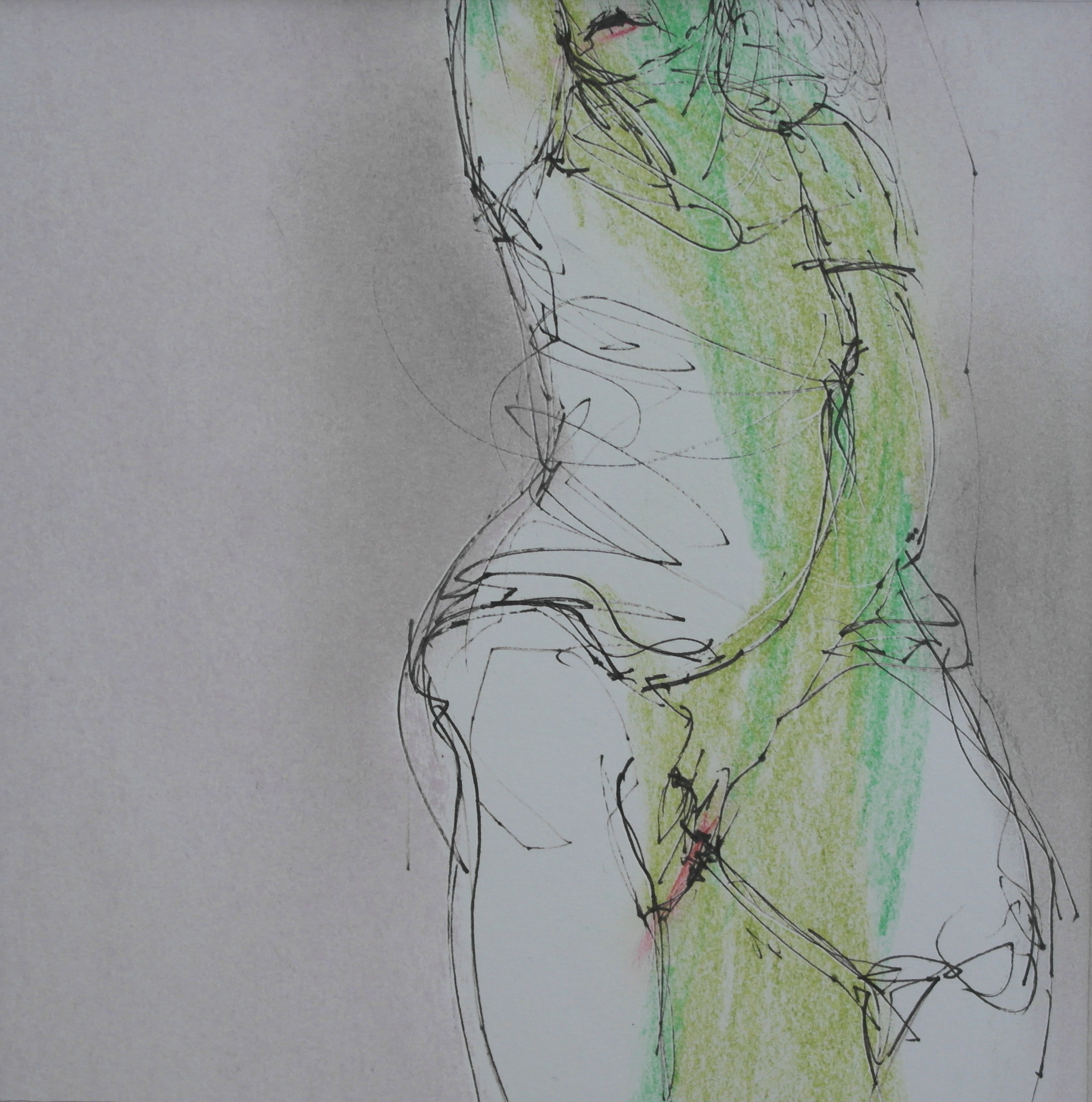 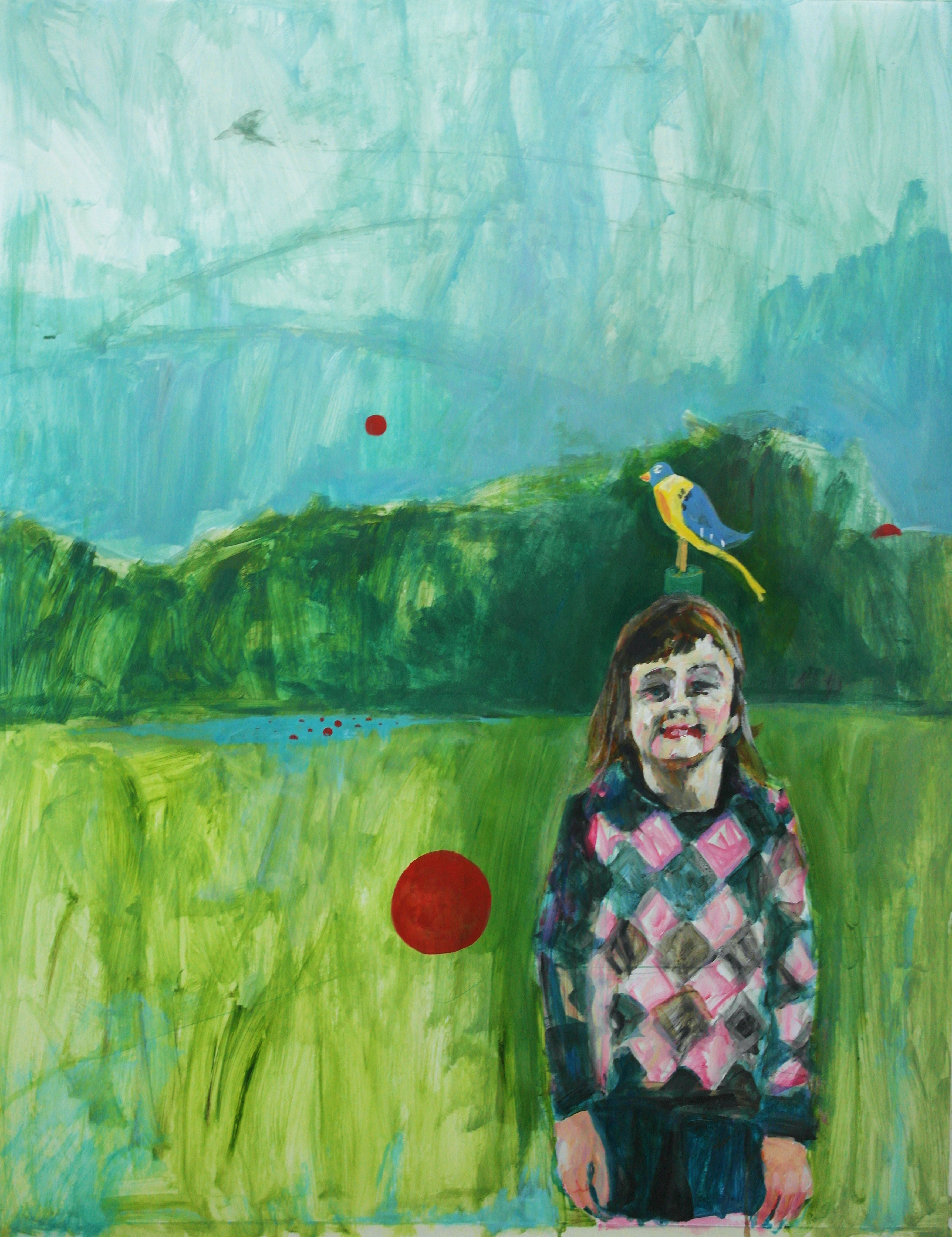 One Response to Karen Strang Interview