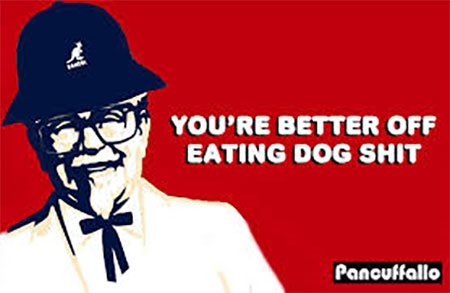 Diabetes sufferers, school children, drug dealers and fat bastards all over the UK gritted their canines this morning in preparation for another day without their favourite ‘not fast enough’ dead animal dish; KFC fried chicken. KFC recently changed their haulage company to new smart logistics providers DHL who apparently thought the man on the phone said ‘Mittens’ instead of ‘Chickens’ and now half of London is threatening to riot over the shortage.

Representatives of the Advertising Standards Society (ASS) waded into the affray ordering all KFC branches that have not been burnt down by angry fried chicken addicts to remove the ‘C’ in their famous logo if they are no longer selling ‘chicken’. It was subsequently pointed out to the same officials that the chicken is not actually fried in Kentucky either, which has prompted a further investigation into whether the company should also remove the ‘K’, although leading brand experts hinted that simply rearranging the existing letters and adding a ‘U’, ‘E’ and ‘D’ would be more appropriate.

An agitated 107 year old Colonel Sanders attended a press conference at his US ranch saying that he deplored the ‘chicken riots‘ that were, no doubt, about to ‘engulf the UK’ and promised that, whatever happened, he would fight to keep the all-important ‘F’ in his famous logo and reassured customers that his popular franchises would continue to sell fried potatoes, fried cheese, fried popcorn, fried fries, fried salt, Coke and plenty of buckets.

https://www.bristolpost.co.uk › What’s On › Eating Out in Bristol

“The indefinite closure of this much loved public utility, coming so soon after Saturday’s devastating earthquake …

View all posts by Ethan →
This entry was posted on 21 February, 2018 in homepage and tagged Ethan Harrison. Bookmark the permalink.