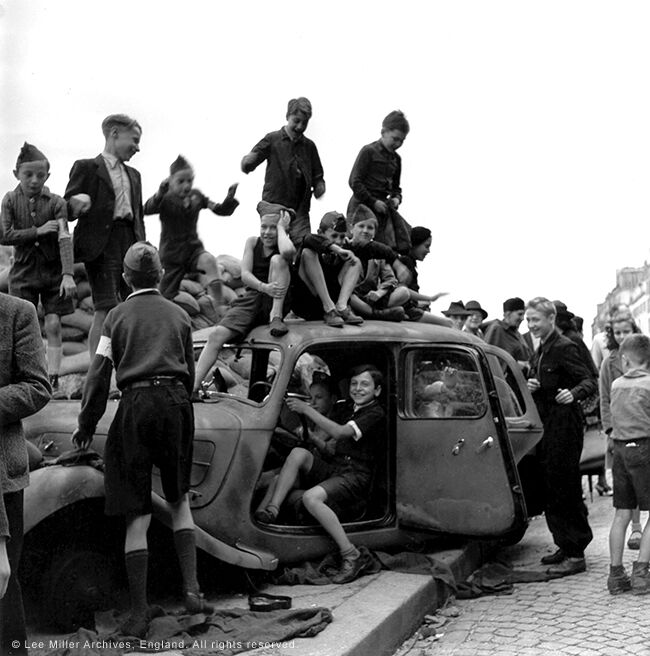 If you were one of the few women photographers accredited by the U.S. Army at the start of World War II, chances were you were far from the frontlines. Military regulations at the time dictated that female photojournalists, unlike their male counterparts, were not to enter combat zones. But, the Poughkeepsie-born photographer and noted Surrealistoperating as British Vogue’s war correspondent, was not one to be constrained.

Miller had made a habit of not taking no for an answer long before she accompanied American forces to document scenes such as the Blitz; nurses operating hospitals after D-Day; women serving across the armed forces; and just-liberated concentration camps. Her first coup was gracing the cover of U.S. Vogue in 1927 at age 19. (Her modeling career began thanks to a chance encounter with mega-publisher Condé Montrose Nast, who pulled her out of path of an approaching vehicle in New York City.) She then used her role as a model to transition into shooting her own editorials.

And as she grew less interested in posing for pictures than taking them, Miller brazenly determined that none other thanMan Raywould be her photography teacher. “He said he didn’t take students, and anyway, he was leaving Paris for his holiday,” she later recounted of approaching the Surrealist in 1929. “I said, ‘I know, I’m going with you’—and I did.”Amidst a series of cross-Atlantic moves and shifting relationships (Miller was famously a subject of the art and affections of eminent artists, includingPablo Picasso

), she remained steadfast in her photographic pursuits—from developing the printing technique of solarization alongside Ray (with whom she had an affair and creative partnership), to starting up her own studio in New York in the early 1930s, to her thoughtful solo explorations of Surrealism during her time in Cairo in the mid-1930s. When Miller settled in England with the painterRoland Penrose

in September 1939—the month the Nazis invaded Poland (and England declared war on Germany)—she volunteered as a studio assistant for British Vogue, which proved to be her first step toward war photography. 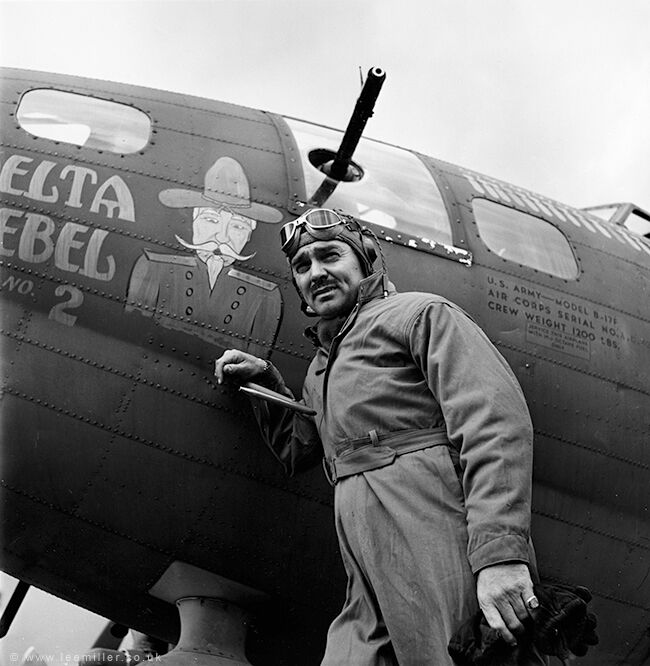 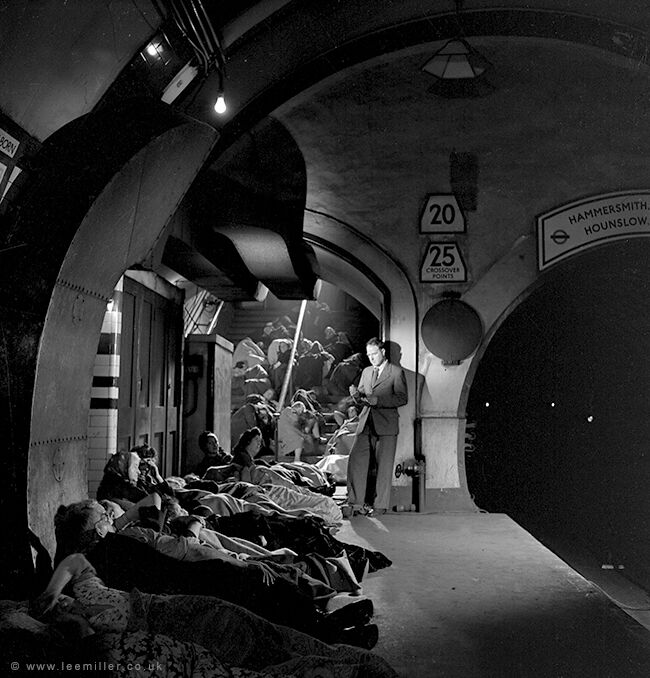 Per the British Ministry of Information, Vogue began producing content to benefit the war effort—writing about shorter hairstyles, for example, to convince women who were assigned to work in factories that short ’dos were in fashion, and not just a safety regulation. It informed the magazine’s largely female readership how to help its country on the home front; articles like “Fashion for Factories” and “Smart Fashions for Limited Incomes,” both photographed by Miller, lent a degree of sensibility during a time of unrest.
“It seems pretty silly to go on working for a frivolous paper like Vogue,” noted Miller at the time, who said that her work may be “good for the country’s morale, but it’s hell on mine.” Her assignments were not limited to fashion for long, however. Vogue soon met the reality of the war head-on during the Blitz when its building, along with much of London, was destroyed. Miller photographed the physical damage throughout the city, and chose still, evocative symbols to suggest the conflict’s psychological impact: Remington Silent (1940) is an image of a typewriter splayed open, unable to form words; One night of Love, London (1940) depicts a sign proclaiming there would be no raid that evening—a short respite from the reality of war.
By 1943, Miller had signed on as the official war correspondent for British Vogue. The editors saw an opportunity to expand their coverage of the war effort, and Miller photographed an integral, less-celebrated aspect of the invasion: the women nurses in Normandy who saved soldiers’ lives in evacuation hospitals. Miller captured buzzing scenes on her Rolleiflex, which shot square-format photos and required close proximity to her subjects. The black-and-white images were published in 1944 under the heading “Unarmed Warriors” with text by Miller herself, who contributed written reporting in addition to her photographs. “In the shock ward they are limp and flat under brown blankets,” she wrote, “some with plasma flasks dripping drops of life into an outstretched splintered arm, another sufficiently recovered to smoke or chat to see if he’s real.” 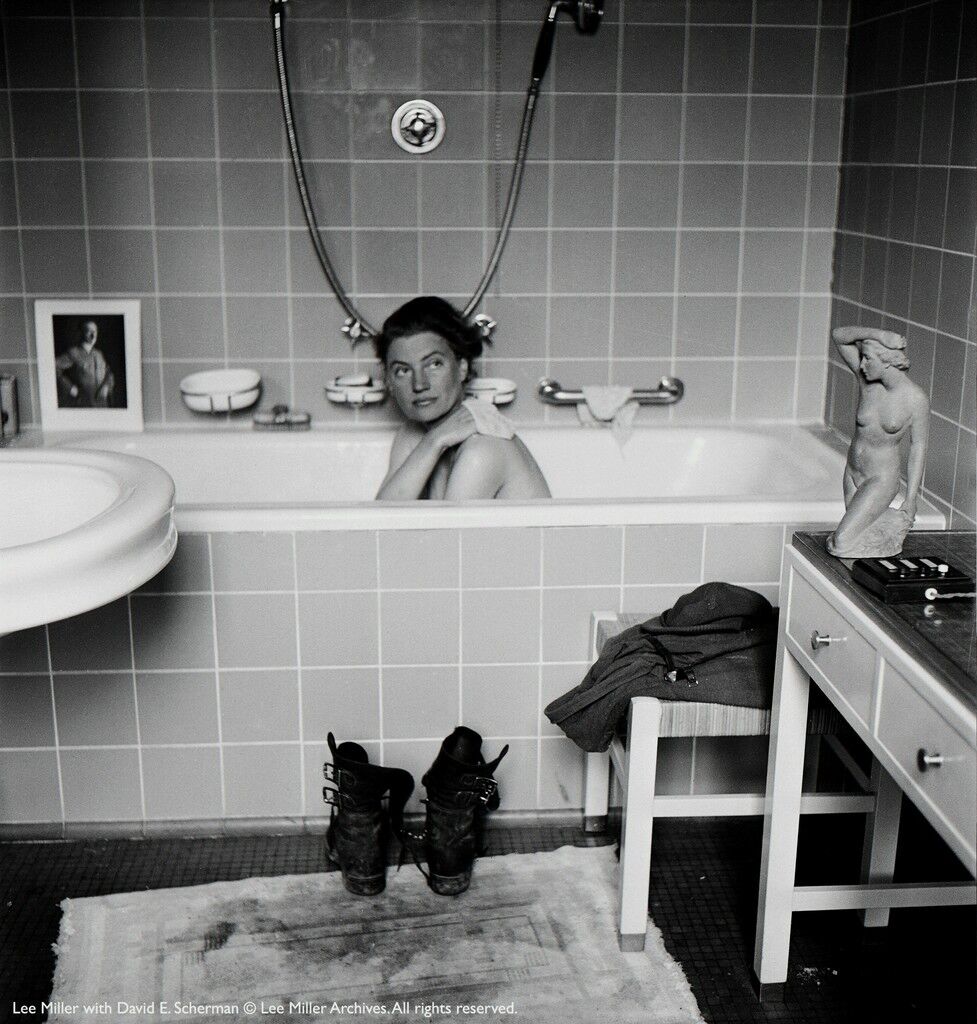 °CLAIR Galerie
The surreal scene that Miller described is one typical of war, but entirely new to her. Yet as her son, Antony Penrose, observed in his 1998 biography of his mother, The Legendary Lee Miller: Photographer, 1907–1977, her unique background capturing uncanny moments and haunting, bizarre portraits during the heyday of the Surrealist movement served her well in war photography. “Unexpectedly, among the reportage, the mud, the bullets, we find photographs where the unreality of war assumes an almost lyrical beauty,” wrote Penrose. “On reflection I realise that the only meaningful training of a war correspondent is to first be a Surrealist—then nothing in life is too unusual.”
Miller would continue to photograph the women of the Allied forces, such as the pilots of the Air Transport Auxiliary, the Women’s Royal Naval Service, and Auxiliary Territorial Service searchlight operators—all dutiful soldiers, but less lauded than their male peers—before documenting the Allied invasion of Germany. Alongside David Scherman, the LIFE photographer she often traveled with, Miller photographed the liberations of Buchenwald and Dachau.
While Miller didn’t often photograph acts of violence, she unflinchingly documented their results: Nazis being forced to look at the bones of their victims, members of the S.S. who committed suicide, and emaciated survivors. She distinctively captured the brothel within the Dachau concentration camp, a horror that remains largely unknown through present day. When she submitted these images to British Vogue, she wrote: “I implore you to believe this is true.” The magazine ran some of her most gruesome images—such as a mound of dead bodies as a full page—with a message: “Believe it.” 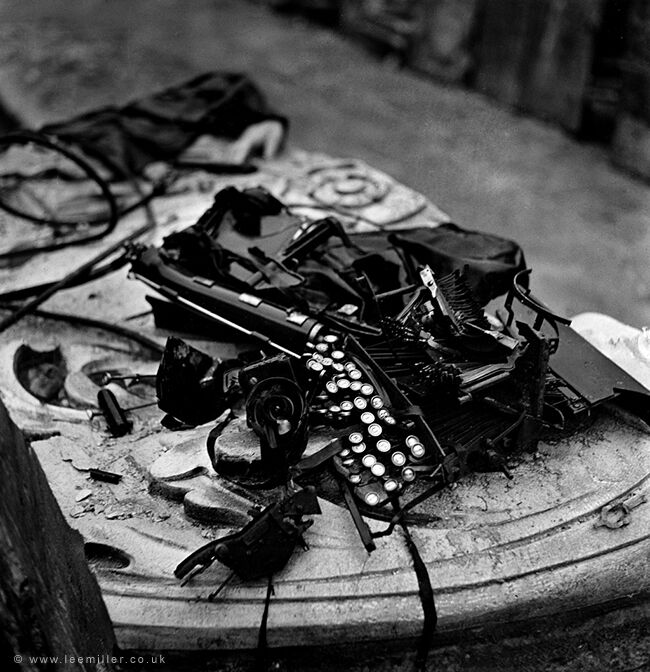 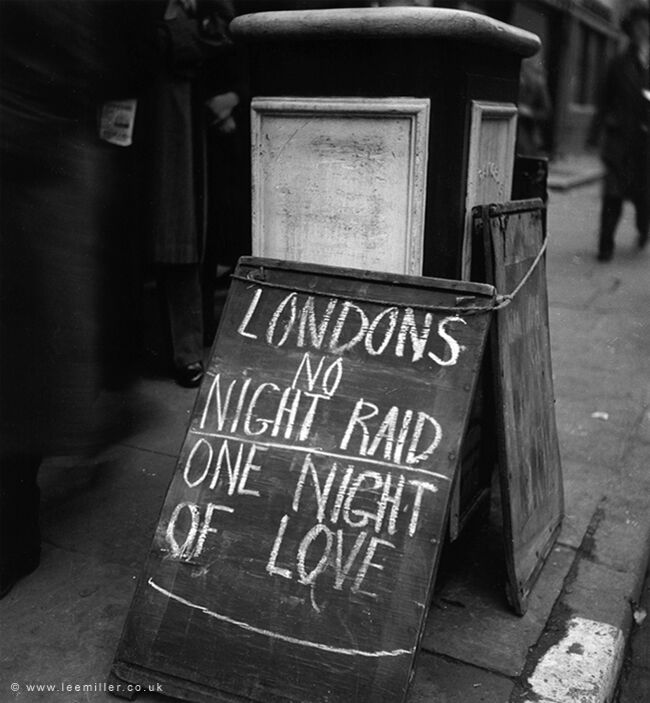 °CLAIR Galerie
The most-cited image of Miller’s from the war is likely the one she didn’t take herself. Following their time in the concentration camps, Miller and Scherman went to Munich and entered Hitler’s empty apartment, where Miller staged a scene for Scherman to photograph in the bathroom (she, too, photographed Scherman in the same environment, though that picture is not widely circulated). Miller undressed and stepped into Hitler’s bathtub, upon which she had placed a photo of the Führer. The bathmat was soiled from her boots, which earlier had walked through the grounds where so many had suffered.
Miller’s expression in the photo rests somewhere between defiance and numbness. “For Scherman, it was a great journalistic coup, and it brought him fame,” wrote Judith Thurman of the image in The New Yorker. “It brought the model fame, too, though not of the kind that her war journalism deserved. That sensational moment of callous clowning after an ordeal is the image of Lee Miller that is, perhaps, best remembered.”
Miller continued to shoot the war by focusing on its aftermath in Austria, Hungary, and Romania, but by 1953, she had put photography behind her. She struggled with everything she had witnessed, and, in fact, never shared her wartime experiences or images with her son, Antony. His only exposure to his mother’s Surrealist leanings was through meeting her artist friends and her cooking: After studying at Le Cordon Bleu, Miller became known for her surreal culinary creations, such as blue spaghetti, green chicken, and Coca-Cola marshmallow ice cream.

“I think she made a deliberate decision to bury her career, and this was partly as a result of her war experiences, partly as a result of her post-traumatic stress,” said Penrose of his mother to NPR in 2011. The entirety of Miller’s oeuvre—60,000 negatives, 20,000 prints and contact sheets, and several documents and keepsakes—was discovered in the family home’s attic after her death in 1977 at age 70. Were it not for this chance finding, her key documentation of the women of World War II, and her contributions as a Surrealist—rather than simply one of their subjects—might’ve been forgotten. It seems a fitting conclusion to Miller’s life story, which, through to the end, was as surreal as her photographs.