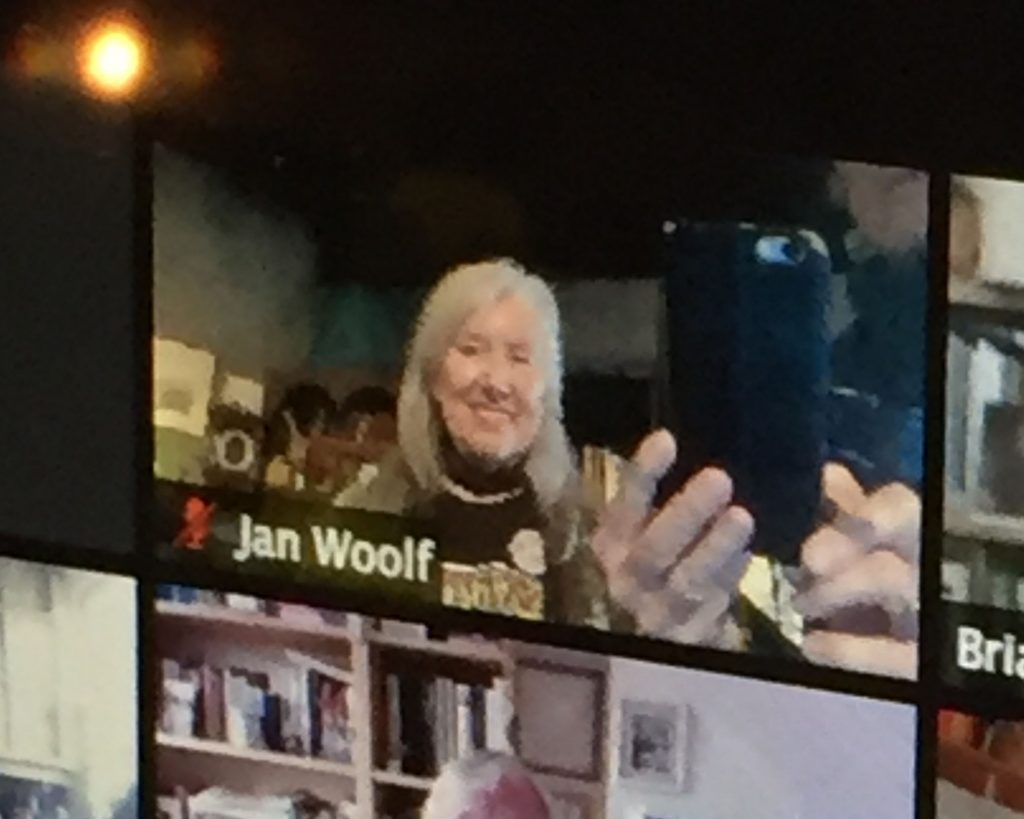 I love Pentameters Theatre. It’s a 60-seater over the Horseshoe pub in Hampstead, North London.  Probably the last bastion of the old creative quarter before chains and big money saturated NW3.  The Artistic Director is Léonie Scott-Matthews, who has managed it for 50 years, welcoming fresh talent and taking a punt on folk who turn up with a sheaf of poems, stories, a play or a guitar.  She let me read my stories from the stage, and then cook up a series called Short Shorts Fridays – bringing in other writers – which the plague temporarily stopped.   But early in lockdown my trade union – the Writers Guild of Great Britain – asked members to nominate someone for an Olwen Wymark Theatre Encouragement Award.  Since Léonie had encouraged me (the word ‘courage’ by the way means blood to the heart) I nominated her, the Guild accepted, and did the honours on Thursday.  Normally there would be an event, with lunch, speeches, certificates  (and virus)  handed on.  But this year we had to settle for a zoom do. Which was nice as Léonie got her award on the Pentameters stage.  OK, there are no pheromones in zoom (they all get crisped up by electricity) but there was excitement as Guild President Sandi Toksvig read the names of the winners.  Playwright Mark Ravenhill spoke of the awards inception sixteen years ago, when it was decided to honour those whose support and encouragement sparked something off in a theatre writer – a chain reaction.  The ‘ceremony’ was charming.  Just me, Léonie and her partner Godfrey Old on the stage, all gurning surreally in front of the speaking stamp album of a zoom room.  For readers who have never seen a stamp album – look it up.  A page of a stamp album is a beautiful thing, so imagine them all talking to each other.  Pure Harry Potter.

As the Communard painter Gustav Courbet said ‘ all art owed more to other art than it ever did to nature.’  A rather portentous way of me saying, it doesn’t come from nowhere.  This is the thing about Léonie – her infectious enthusiasm.  Another bit of etymology coming on  – to ‘enthuse’ is Ancient Greek for love of god.   You will see I have god as lower case, so I use the word in its life source sense, not deity.  Where was I?  Pentameters.  The first post plague show will be a one-man performance by Paul Brightwell on the artist Kurt Schwitters, which will be terrific on the briccolaged beauty of that stage.  And later, some of Léonie’s own drama,   ‘Bedsit Girls and the assignation (I’ll keep that typo) of President Kennedy.’  She also has two fine published collections of poetry; Excelsior and The Girl Monologues.  Then there’ll be more of my stuff – and other people’s stuff. And so on, and on and on, in this wonderful off grid theatre run by a free spirit.

View all posts by Jan →
This entry was posted on 10 April, 2021 in homepage. Bookmark the permalink.