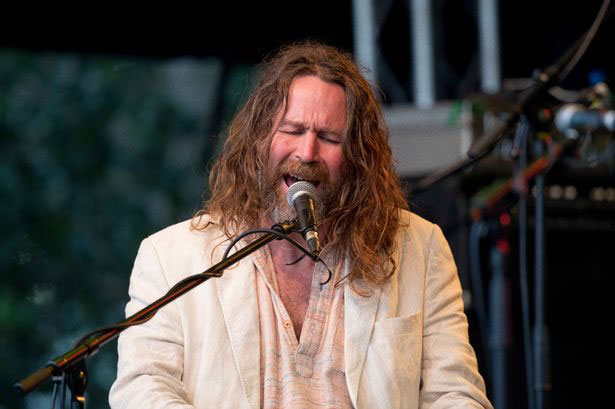 Liam Ó Maonlaí has a fascinating telephone answering-message. One that’s wonderfully musically personalised, but it’s no substitute for the man himself. We have a passing encounter while he’s in Belgium playing a solo date. ‘Sorry for the slow reply’ he responds. ‘I’m a slow singer! I’ll be flying to Luxembourg to play there. Maybe we can talk on the Sunday? Then I’ll be back in Dublin Tuesday, late afternoon I’d say.’

My take on this proposed interview is that because there’s no new album up for discussion – it excuses us from all that tedious promotion-angled hyping up, and frees us for a more general discussion about what music means to Liam, how it affects him, the way it expresses his spirituality. There’s plenty of rich material there for a feature. He agrees. ‘That sounds like it would make a great conversation.  I appreciate your sensitive reading of where I’m at.’

Now he’s sitting in his Dublin room with his grandfather’s piano, his harp and his guitar. Effortlessly articulate, his voice attractively accented, and instantly at ease, his conversation is as anecdotal as his music. As in his song ‘I’m Sorry’ on the debut Hothouse Flowers album, People (1988) ‘there comes a time in everyman’s life when he’s got to look over his misdemeanours, misgivings, misfortunes and miss whatever her name is…’

Misdemeanours? Does he set aside a time for playing music every day? ‘No, I’m a bit more scattered.’

He has a slow conversational narrative song-style, word-crammed, which erupt into folky soul. Is it premeditated? ‘No, once I have the ‘story’ told in my mind, the words just come,’ he explains. ‘It’s not written down. Most lyrics in Rock ‘n’ Roll are ragged. They don’t need to be perfect. You know, we don’t rehearse our conversations. Yet you and I, we could talk for – say, two hours, and we could go in any direction, talk about all kinds of things that neither of us anticipated.’

Well, I only have a C60, so two hours might be a little unrealistic. ‘Premeditation is a beautiful way of working too. I envy that, but at the moment, it’s not my way. And I never sing the song the same way twice. Until once we go into the studio and record it, then it’s set, and I tend to follow the way it is on the record. Bearing in mind that Hothouse Flowers are first and foremost an improvisational band, anything can happen on the day.’

Do you write primarily on guitar, or piano? ‘I’m more comfortable on piano. But sometimes guitar. I’m not a prolific writer. Ten useable songs a year is generous for me, I’d say, but it seems like a good ratio. I’ve been working on a song called ‘Mountain’ about the incredible obstacles that some people come up against in life. I was thinking of a person facing a condition that leads to total organ failure. We’ve just no perception of people’s grief. That’s such a terrible thing. Yet his face is still glowing.’

The day that Liam was born, 7 November 1964, Sandie Shaw was no.1 on the chart with ‘There’s Always Something There To Remind Me’. ‘I’ve got a song called ‘The Day You Were Born’, he adds, it was recorded as part of ALT – with Andy White and Tim Finn for the 1995 Altitude album. ‘I wrote that song on a left-handed guitar. On an upside-down guitar.’ Paul McCartney did fine on a southpaw. ‘And Jimi Hendrix.’ 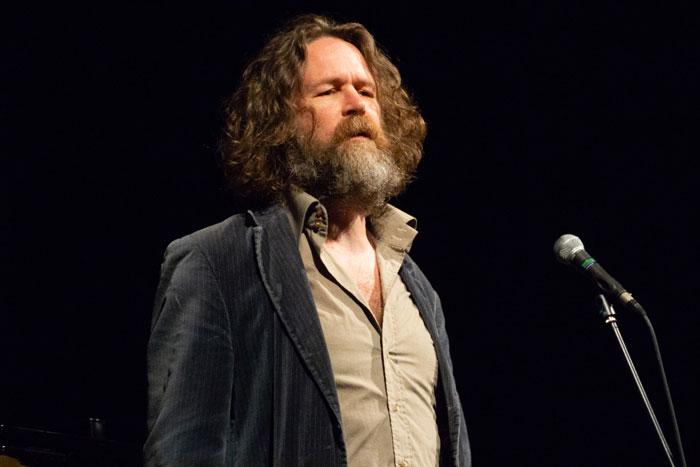 Liam started out busking on the Dublin streets. When you see a busker today, do you still toss a coin? ‘Maybe, y’know. Not necessarily. If they’re good I might toss a coin.’ Was Celtic Soul the motivating force, was he attuned to the Celtic Heartbeat? ‘There’s a song that I love, I heard Mike Scott’s ‘Medicine Bow’ on the Waterboys 1985 album This Is The Sea, and it touched something inside me. I just love the line ‘I’m gonna take my books, I’m gonna wear my coat, I’m gonna find my scarf, and wrap it around my throat.’ It’s an incredible line. But that album for me is, like, the greatest. The penny dropped, it hit that poetic lyrical flow. It’s such an amazing song.’ He repeats the words ‘and wrap it around my throat’ as though he’s tasting it.

Music is the one area of life where you can go from busking in the precinct to being on Top Of The Pops inside a month. As happened to Hothouse Flowers with global debut hit ‘Don’t Go’, a song that captures that pure exuberant hair-flying in the wind carefree freewheelin’ troubadour freedom. Liam’s rasping voice and piano, Fiachna Ó Braonàin’s guitar, Peter O’Toole on bass, Leo Barnes adding sax while Jerry Fehily lays down drums. That success must have been weird, the chart hits must have set off interesting reactions in his head? Although what celebrity and what Rock Stardom means today is something else up for grabs. Although Hothouse Flowers were never allowed to devolve into that Rock celebrity thing.

‘Fame depends on who you happen to be in the room with’ he rationalises. ‘It’s an acceleration. I’d thought about the idea of fame beforehand. And I remember realising that it’s like being the neighbourhood butcher in the high street. Your customers get to know you. They know who you are, a lovely strong guy with a big smile. Or you’re the local baker. People know you. You’re known in that street. You’re a public person. In a way, a singer-songwriter is a craft like any other.’ Following second album Home (June 1990) there was intensive touring to promote Songs From The Rain (1993). Was life on the road something he enjoyed? ‘In general I did enjoy the touring, yes, although I did find out it was… except for the intense schedule. It got to the point that there was one year we only had two weeks off throughout the year. Then my father passed away in 1993, and I realised I’d gone as far as I could go. That’s what happened. And I said ‘I need to see four seasons free of pressures. Take a year off at home. I need to get a life.’ We talked it over. We talked it through amicably. And we agreed to take a break.’

The break spun out into years. He speaks touchingly about his father’s death as the sabbatical extended. Yet the affiliations remain strong. ‘The nature of what I do, and the nature of what we do as Hothouse Flowers means that it is constantly bettering itself. Whenever we play a good gig, that gig becomes the best gig ever. That’s just the way it is. When you hit that moment in music it’s simply incomparable, and I’m glad to say that still happens. And as long as that still happens, then it simply keeps getting better. We’re fortunate that our song-list now goes back over thirty years, and we do play a fair few of those older songs. But having said that we never plan ahead. We don’t have a set-list. We go on stage and we see where the music, the day and the atmosphere takes us’

Instead, Liam used the band as a jumping-off point into a deeper study of Irish music, as well as more esoteric areas of World music. Do you believe that music is the healing force of the cosmos…? ‘Of course I do. And it’s constantly changing. Music is a law and a life unto itself.’ His epic Mali Project opened up music sans frontiers, to the universality of the music pulse. The movie that chronicles it all – Dambé: The Mali Project, tells the tale of the 3,000-mile cross-cultural trip Liam took with Paddy Keenan (Uillean piper of the Bothy Band) across West Africa, following the Niger river from Bamako to Timbuktu, meeting and collaborating with musicians such as Afel Bocoum and Toumani Diabaté, as well as nomadic herders, all the way to the remote ‘Festival Au Désert’.

‘There are so many connections, definitely. I’ve always loved roots music. I’ve always had a passion for it. And West African music is the roots of Rock ‘n’ Roll. West Africa, Irish music and instrumentation, the bodhrán, Malian music and the Kora, and everything else. Strains of everywhere come together. When those West African people were taken to America they took their rhythms with them, where it evolved and Rock ‘n’ Roll was born. There was music a thousand years before there was a music business, and there will be music forever. The music business was not designed by musicians. It’s a totally different animal. When we got signed we got into the whole business machine and it became very heavy and grey and depressing. The problem you’re always faced with is that the business was designed by business people. It doesn’t always necessarily work in the musician’s interest. But things are changing, the nuts and bolts of the music business are changing.  What I love about today is that somebody obscure can still, if they have a talent, do it. The world can hear your songs without you having to sign away your soul, or be contractually owned by somebody else.’

Meanwhile, ‘the Covid Lock-Down has been very very valuable for me’ he offers. ‘This last year, it’s provided a time to breathe. I get up in the morning and just walk. The simple act of walking is a great way to de-clutter the mind. Walking is a solitary thing, a kind of meditation. Every morning I reach a level of bliss. The great outdoors. The trees. The flowers. I mean, it’s not as though we live out in the country somewhere, but even in the midst of a housing estate you can always follow the row of silver birch trees. You can, you really can.’

And there’s new music. ‘Visiting my partner’s parents in Paris, I decided I wanted to do some work while I was there. There was a window, so we just made music, recording new songs with a master French woodwind instrumentalist – he plays bass clarinet, for which I kind-of use the working title ‘Music For The Bath’. And another, one of the tracks I made for the magazine, called ‘Evening Return’. But there’s more music history too. For Liam, his music is a genetic as well as a cultural thing. ‘Oh very much so, on both sides. My mother was a piano player. My father was a piano player. I come from generations of piano players. My grandfather actually owned the piano that James Joyce played! Joyce apparently played piano reasonably well, and he could sing in a fair approximation of the way that Irish tenor John McCormack sang. He really did. My grandmother talked about how he sang and played piano. Joyce came to visit because he wanted to know more about my grandfather’s cousin Maggie Lydon, who was loved as a soprano. But a quiet woman. Joyce was passionate about music, but he was torn. He chose literature because he wasn’t great at theory of music. He became distracted by future-wife Nora Barnacle, and wrote Ulysses instead. So he chose the life of a novelist.’ And boogie-woogie’s loss was literature’s gain?

‘An absolute pleasure’ he closes. It’s as though we could talk for – say, two hours, and could have gone in any direction, talked about all kinds of things that neither of us anticipated.

Expanded from an interview originally published in:

View all posts by Andrew →
This entry was posted on 30 April, 2022 in homepage and tagged Andrew Darlington, Celtic Soul, Liam Ó Maonlaí:. Bookmark the permalink.