Love in at Handyside Arcade 1967

Join the groovy love-in at Handyside Arcade in Newcastle, 1967. The mecca for North East hippies.

A much loved centre for all things hippy and alternative in Tyneside in its heyday, showing that the counter culture movement wasn’t confined to London and Haight-Ashbury. Mingling among the fashion shops, with posters of Dylan and Twiggy, the “with it” “hang out”, listening to local band The Gas Board, with Mike Figgis. The legendary owner of the Kard Bar, Brian Sandells, explains the no drugs policy, while another interviewee clearly inspired Steve Coogan.

Tyne Tees Television gave us this wonderful portrait of the Handyside Arcade which became famous for being all things alternative, punk as well as hippy, right up until its, much contested, closure in 1987. Just before this event, in March, a bit further along Percy Street at the Club A Go Go, the Jimi Hendrix Experience was supporting Alex Harvey. Among the splendid shops – “Paraphernalia”, “Fig Leaf”, “Target” and “Scene” – was one owned by Animals drummer John Steel. Brian Sandells’ music and memorabilia shop sold 3,000 posters a week, and despite his anti-drug stance, was ordered by the police to stop selling legal highs. An early supporter of Pink Floyd, Sandells died in a fire at his fourth shop in 2015. 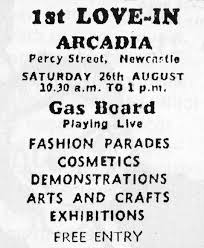 It’s 1967 the year of the ‘Summer of Love’ and to find out what’s happening on Tyneside, Tyne Tees Television cameras and a reporter go to the Handyside Arcade on Percy Street to attend Newcastle’s own ‘love-in’.

On a balcony in the arcade a camera zooms in on a Tyne Tees reporter who holds a microphone and speaks to camera. Crowds of teenagers share the balcony with him as they strain to see what’s happening along the ground floor of the arcade where crowds are gathering.

The reporter introduces the event as a love-in. The camera pans right to left from the balcony down to the crowds below. In the background the sound of rock band ‘New Religion’ as the play to the crowd. From the balcony the camera pans left as the multi-coloured costumes of the crowd go by below the balcony. The reporter says that the event is a combined effort from the owners of the boutiques and café’s that make up the arcade, a high angle shot of the arcade follows.

The reporter continues that the arcade is a bit of an ‘eye-opener’ and the camera shows close ups of the names of various boutiques which trade in the arcade, names such as ‘Object’, ‘Beautique’, ‘Fig Leaf’, ‘Target’ and ‘Scene’. The reporter says that a fashion show will take place later in the day, showing the latest ‘with-it’ gear, an occasion for which he ‘can’t wait’.

The reporter off camera refers to the style of clothes people are wearing as a throwback to prehistoric times, with people sporting every kind of hairstyle and every kind of shoe. Close up shots follow of the mainly teenage crowd as they wait in anticipation for the various events taking place.

In one of the boutiques a woman from a cosmetics firm applies make-up to the face of a young woman, other girls in the boutique look on. The reporter off camera isn’t sure whether she should be demonstrating to the boys or the girls. The demonstrator finishes by placing a wig on the girl’s head.

Under a lamp post in the arcade, another girl has artwork applied to her tee shirt by an artist using a felt pen.

A long shot follows of the band ‘The Gas Board’ featuring Ian ‘Sparky’ Watts on guitar, Graham Simpson on bass and Mike Figgis on trumpet. This is followed by a close ups of the crowds of teenagers waiting for the various events on offer at the arcade to start. The camera pans from right to left showing expectant faces. In a corner of the arcade a group congregate to get closer to the band.

The reporter off camera says that the people gathering at this event are not celebrating a growing drug culture, in fact, he says many of the are against it. However, he continues, many of the local police drug squad are present.

Brian Sandells one of the organisers of the event, and a business owner within the arcade is interviewed on camera. The reporter asks Mr Sandells if he feels the event has been a success. His response is that the event is going well and he hopes that it will go some way to counter impressions of the North, being an area notorious for drug abuse. Brian Sandells also says that the arcade itself has no connections with any reports of drug violations. He says that the whole event has an anti-drugs message and the organisers are very pleased with its progress. The reporter also asks whether the organisers can be certain that drugs are not being taken. Mr Sandells explains that there is a society within the arcade which is made up of proprietors, and they keep close scrutiny on what’s happening within their premises and the arcade. As a footnote he also states that the local police CID also keep a close eye on things.

The reporter then asks one young man identified as Graham Simpson from The Gas Board and later Roxy Music why he is wearing a sheepskin waistcoat with a fur collar, beads and eating an ice lolly, what he is going to do at the love in. He replies that he doesn’t really know, apart from playing in one of the bands.

The film cuts to another young man, who is holding a cigarette and also sports flamboyant clothes. The reporter asks him whether he is disappointed that there aren’t any drugs. The young man says not, and attending the event isn’t about taking drugs. The reporter also asks what his dress style is supposed to represent. The young man explains that he just enjoys dressing this way, especially when he’s on holiday when he likes to dress up in a ‘bohemian’ way. At school he wears a much more formal shirt and tie.

A young woman is asked what she thinks of the event, and what she is expecting to see. She replies she doesn’t know but just wants to join in with the fun.

A teenager wears a bandana and a flower in his hair, he’s asked what the flower represents. He replies that it doesn’t represent anything particular, it’s just for show. He’s asked what he expects to find at a love-in, he replies that the main reason for coming was to see some of the rock bands.

Another young man is asked about the type of flower he is wearing, he admits he doesn’t know the type of flower, a girl on the balcony was giving them away. He’s also asked if it is a ‘regulation’ flower suitable for a hippy. The young man is not sure, but he does know that flowers are supposed to represent different things. The reporter asks what his flower represents, he says he doesn’t know, perhaps beauty.

The film ends with a close up of a couple kissing. 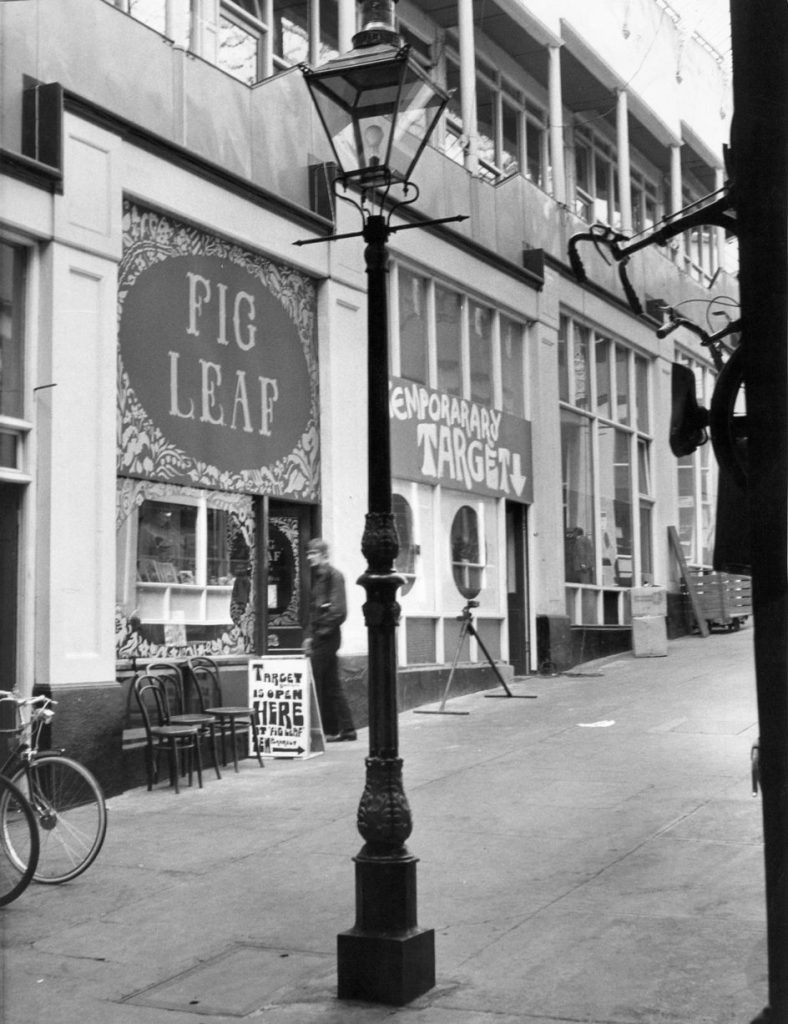 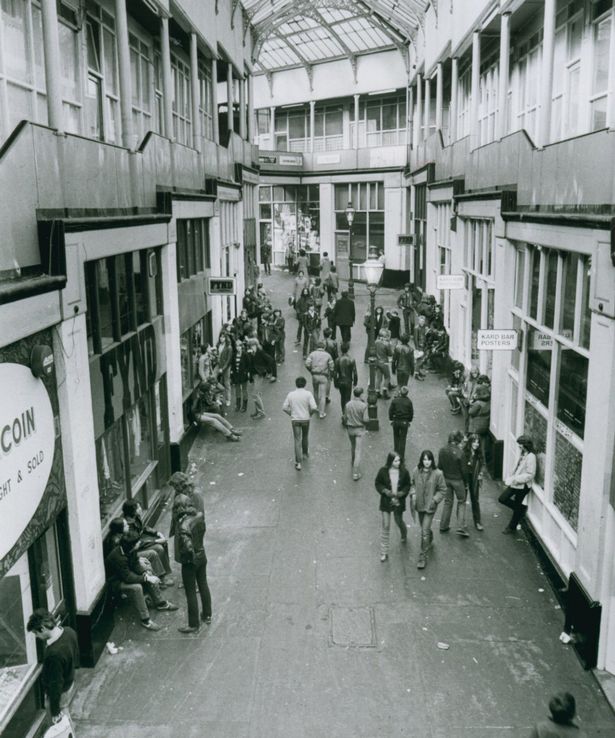 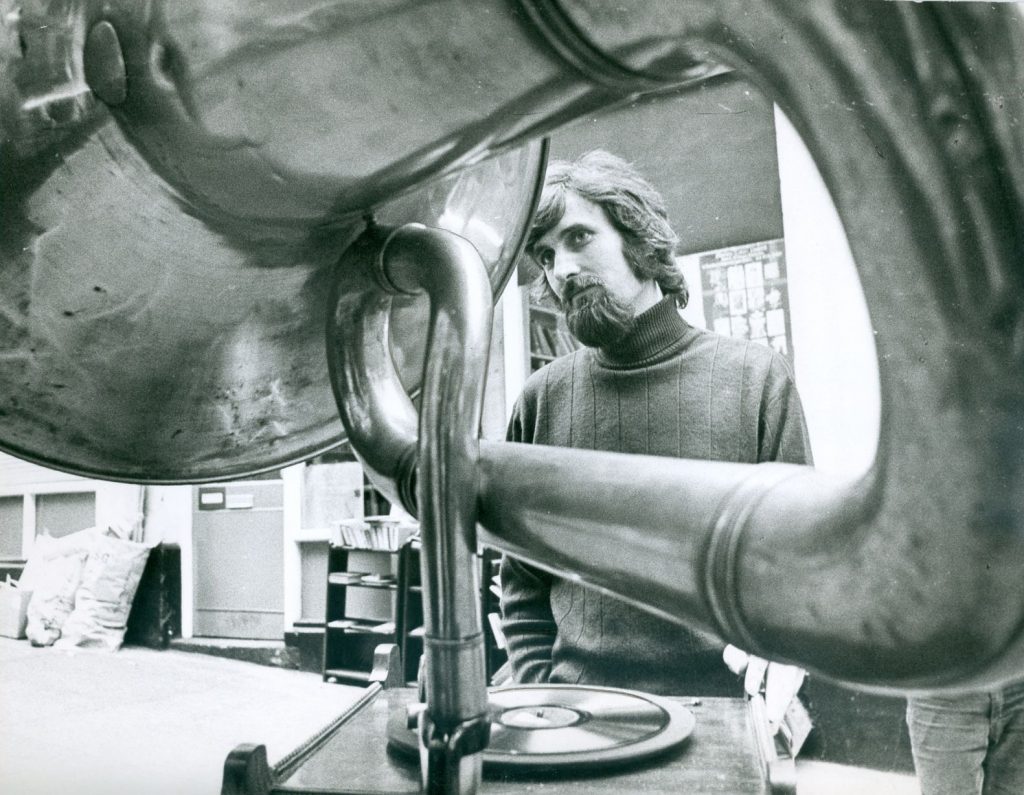 With thanks to Valerie du Monceau,
who had a Saturday job in one of the pottery shops on the upper floor
before being inspired to go off to art college