The complete absence or uselessness of rational action to address the frequency of mass shootings in our society requires that we reexamine them in a completely different light. We cannot continue to see these deaths in the context of a pragmatic, civil debate about gun laws. That will tell us only a little, if anything at all. If you go on Twitter, you will find an endless stream of tweets with links to graphs and research that make it abundantly clear that mass shootings are very preventable. There is no mystery to their cause and persistence. But what if our society is not looking for a solution? What if it’s the other way around: It fears the prevention of massacres? These are the kinds of things we now need to seriously consider.

The force that’s regularly supplying Americans with bullet-ridden corpses might be much deeper and mostly forgotten, and so cannot be so easily recognized by common sense or the secular left. I propose the context that has greater explanatory power for the persistence of mass shootings in the US is religious superstition. We must stop going on and on about lacking laws that would protect our citizens; we must stop going on and on about how this or that politician has been bought. We are way beyond the point where such considerations are meaningful or productive. We must instead ask: To whom are all of these bodies being sacrificed, and why?

The 17 people who died in the mass shooting yesterday will exit the American memory as quickly as the two people killed in that mass shooting in Kentucky three weeks ago. All of this rumbling about gun control will prove to be another great waste of time. This is a fact: We have a law that prevents someone from Chad entering the US, though no one from that country has ever killed a US citizen on US soil. This law, which is also known as the Muslim Ban, was even approved by the highest court in the land:

The US Supreme Court on Monday allowed the newest version of President Donald Trump’s travel ban to take effect pending appeal. This is the first time justices have allowed any edition of the ban to go forward in its entirety. It signals that some of the justices might be distinguishing the latest version from previous iterations and could be more likely, in the future, to rule in favor of the ban.

So, Americans are protected from people who have never killed Americans, but not from Americans who kill Americans in large numbers on the regular. This fact alone makes my case for religious superstition sound reasonable. As a civilization, the US, in the age of reason and science, has reverted to a form of ritual murder that, in the past, appeased some god.

To get a good sense of what I mean by ritual murder, I recommend reading the seventh story in Bessie Head’s The Collector of Treasures and Other Botswana Village Tales, “Looking For a Rain God.” A mix of fiction and anthropology, the story is only four pages long and concerns a seven-year drought that hit Botswana in the 1950s. A family (a grandfather, a husband and wife, an aunt, two girls, two goats) is desperate for rain. They have run out of money and food, and the sun burns to nothing any cloud that comes their way. One day, the grandfather, Mokgobja, is stirred by an “ancient memory” of a ritual he witnessed as a boy when the country was ruled by their ancestors. The memory had been “buried by years and years of prayer in a Christian church.” It was a ceremony to a certain rain god “who accepted only the sacrifice of the bodies of children.” He, with the approval of family’s other adults, kills the girls: but nothing happens. The rain doesn’t come, the sun continues to “dance dizzily in the sky.” Other people in the area soon notice the absence of the girls. The police are called and, after conducting an investigation, arrest the old man. He is tried in the court of law and punished.

The US is a Christian nation, but it has, like the old man in Head’s story, succumbed to a pagan custom, a ritual that satisfies an unknown. But whereas Mokgobja was aware of his reversion, and so could be found guilty and punished, the US commits its ritual murders like a sleepwalker. And it wants it to remain that way because waking up and seeing all of this blood on its hands would mean becoming exactly like Mokgobja—whose hands killed and sacrificed his granddaughters to some rain god.

There is another difference between the ritual murders in the story “Looking For a Rain God” and the ones we read about in today’s papers and websites. In the former, the gods specified what kind of person must killed for their satisfaction. In the US, the gods are less concerned about who is sacrificed than who performs the ritual. These gods are almost totally indifferent if the killer is not white. 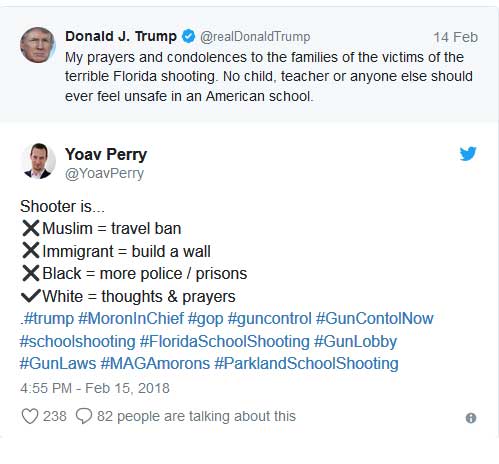 We’ve already begun waiting for the next pile of bullet-ridden bodies. But unlike Mokgobja, the citizens of the US do not know what god is accepting them and why. When the next mass shooting happens, I will devote a post to the name and genealogy of this god.

by Charles Mudede
https://www.thestranger.com
Tweet
This entry was posted on 21 February, 2018 in homepage. Bookmark the permalink.