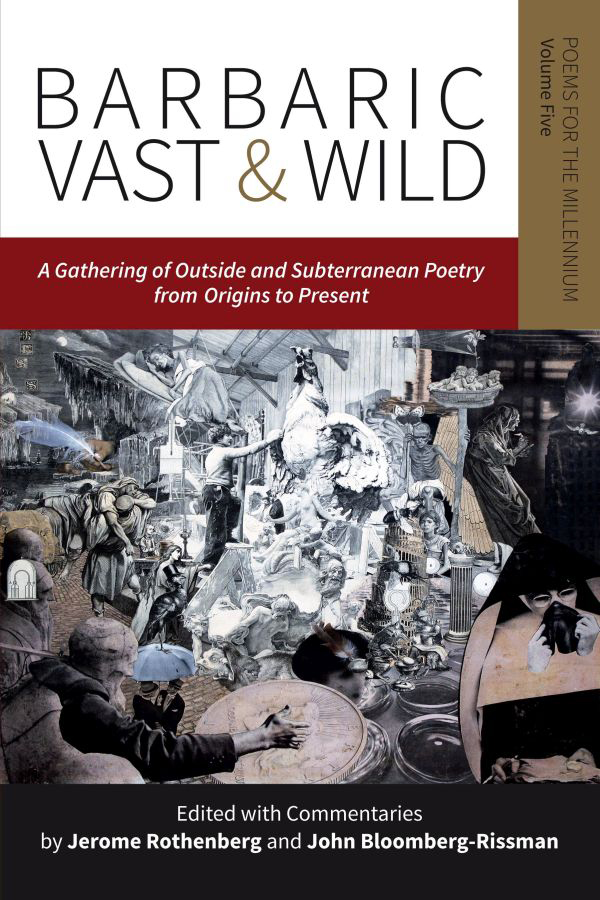 Barbaric Vast & Wild  is subtitled ‘A Gathering of Outside and Subterranean Poetry from Origins to Present’ and is the concluding fifth volume of the Poems for the Millennium series of anthologies. To my mind it’s the crowning achievement of the project, for whilst each previous volume has been generous and inclusive in their contents, these 400+ pages really do give the reader a vast overview of work by mystics, shamans, seers, prophets, lunatics, ranters, deviants, loners, heretics and visionaries who have in the main been ignored by those who control and oversee the literary canon. To have the work presented as poetry first and foremost, complete with critical and social contextualisation along with some editorial comment, is fantastic.

Although much of this work is available to readers, it is usually only in the form of samizdat, scholarly or niche-market publication. Cave drawings – one of which starts this anthology – are normally considered as art or anthropology; ‘The Gospel of Judas’ as an apocryphal Biblical text; ‘The Thunder, Perfect Mind’ as an occult gnostic text; and Harry Partch’s libretto for ‘Barstow’, which uses found hitchhiker inscriptions, is only considered (if it is) within contemporary classical or avant-garde music studies.

What is interesting is how much of the work gathered here seems very akin to contemporary poetry, particularly in its asides and polyphonic voicings, in it’s performative elements, in its freewheeling and freeform layout and its use of image and typefaces. There are amazing similarities between Ezekiel’s visions of fiery chariots, William Blake, Hannah Weiner’s clairvoyant texts, Shaker poems, Maria Sabina’s ‘The Mushroom Velada’, and a transcribed Easter Sermon by W.T. Goodwin from 1971. Each is ecstatic, strange, and possesses it’s own musical and linguistic shape.

Similar lines of association could be drawn between shaman songs, 16th/17th century Tom O’Bedlam Songs, and Mayan incantations; between Krazy Kat cartoons, Kuo-an Shih-Yuan’s ‘The Ten Oxherding Pictures’ and Adolf Wölfi’s self-obsessed and private art; between slogans from Paris 1968 and Mother Goose rhymes; between Kassandra’s 3,000 year old texts found in Mycenae and Larry Eigner’s 20th century poetry; or between the erotic and sexual [sometimes sexist] subject matter of Drupka Kunley’s ‘The Sutra of Sex’, Gwerful Mechain’s ‘Ode to the Pubic Hair’ and John Wilmot, The Earl of Rochester’s ‘A Ramble in St. James’s Park’, whose author is on predatory heat.

If this hasn’t whetted your appetite, I don’t know what will. Rothenberg and Bloomberg-Rissman have skilfully abutted and arranged this diverse wealth of material in four sections: A Book of Visions, A Book of Voices, A Book of Extensions and A Book of Performances. The first is chronological, allowing an overview, the others allow carefully orchestrated dialogues between the included material, allowing primary and underlying themes, evolving shapes and forms, different literary and cultural contexts, to be made visible with little editorial intervention.

Having said that, most entries come with notes about the source of the material, along with commentaries, asides and notes by critics, publishers, translators, associates and the editors, who also note similar material within the book. This wonderful anthology is both celebratory and informative, a marvellous gathering of some of the political, visionary, utopian, lunatic, fringe and maverick voices to be found throughout human history, the underground made visible.

View all posts by Rupert →
This entry was posted on 23 April, 2015 in homepage and tagged Jerome Rothenberg, John Bloomberg-Rissman, Maverick Voices, Outside and Subterranean poetry, review, Rupert Loydell. Bookmark the permalink.