Memoirs of An Underground Filmmaker 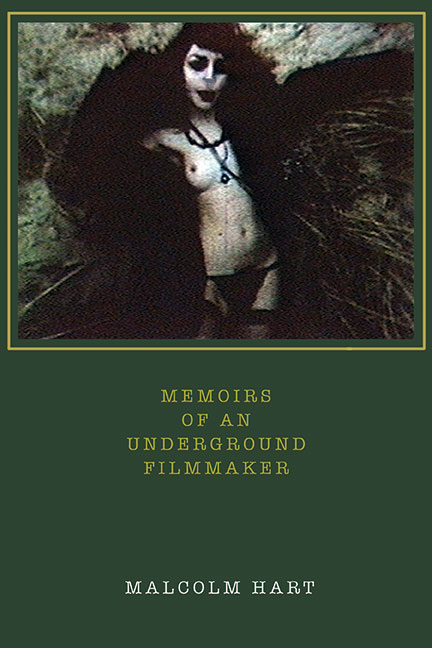 I avoid doing anything I’ve seen before; no script, nothing.  No script, no storyboards. I want to see what happens if we predetermine nothing, no concept to hold us steady, just our instincts and sensibilities to rely on. No judgmental stuff like I often see in movies, no messages.

Rosco’s a perfect partner, experienced in all aspects of film production and ready to explore new paths. He’s owed favours up and down Wardour Street and borrows a 16mm Arriflex with a three-lens turret from a facilities company he does business with. He opens the first can of film. As he unwraps the film from its black, lightproof paper he holds it under his nose and breaths in deeply, smiling as though stoned on the acetate smell of it. He threads it effortlessly into the camera.

Rosco chases Sasha filming her on the run, pale without make-up, wearing a long, leather coat. Dashing through the woods she pauses now and then to catch breath and cast anxious glances behind her. She’s a frightened virgin being pursued. We do this for an hour or two then drive home dropping off the film at the lab.

Next day we race to the lab to see the rushes. Sasha’s good. Exposure, focus and colour are good. Rosco still has commercial commitments to meet so it’s some days before we can shoot the next scene, the metamorphosis from virgin pursued to seductive whore.

We drive to the Suffolk coast to a place where forest ends and beach begins. Sasha transforms her face, draws heavy eye make-up, paints a lurid gash of a mouth. She’s wearing the same long leather coat but little under it. Bare breasts, garter belt, stockings, some weird chains, jewellery and stuff.

Camera running, Rosco chases her out of the woods onto the beach. From behind, she looks exactly as she’d looked in the previous shoot. Now, cut off by the sea from further escape, she stops and turns slowly to camera. Instead of the frightened virgin we’ve come to expect, she’s smiling slyly like the painted whore she’s become. Her coat falls open to reveal her lovely breasts and body draped in this weird regalia. She sinks slowly to the sand, smiles and smiles, inviting us down. Rosco follows her down, coming in close. Cut. OK.

It’s so cold we only do the one take, pack up and drive home. The following day we go to the lab’s viewing room to see all our rushes projected. There’s Sasha running scared through the wood out onto the beach and, trapped, turning into a delicious seductress. We’re on our way.

We are turning the camera on things we’d only thought about photographing. Rosco always wanted to shoot the sun. He captures it on a 600 mm lens as it sets, the source of all known light, a wonderful orange and scarlet fiery disc smouldering at the edges creeping into frame against a purplish sky until it more than fills the screen.

A friend, American photographer David Gittens, had designed and built the quintessential sleek and sinister car, a design way ahead of its time. Tapered front, high back, no doors. To get in, the whole roof and windscreen of darkened glass hinged at the front opens in one. It’s a powerful image. We were to film its virgin run starting outside a pillared and porticoed stately home Nonni found for us somewhere in the Berkshire countryside.

It’s a raw January afternoon. The car waits at the foot of the stone steps, Sasha stands under the portico at the top of the steps, veiled and mysterious. Rosco films her walking down the steps to the car. The stone is icy. He’s walking backwards down them as he films.  He slips, falls flat on his back, camera held high. Cameramen are heroes. They could be hurtling off cliffs to their deaths and all they can think of is the camera and the precious film.

I go to help him. He smiles up at me, his trousers all rucked up, I notice he only has one leg, one real one. The other is pale pink plastic, a sock and boot on the end, of course. You’d never know it by the way he walks, never a suggestion of a limp. He ignores my offered hand and struggles to his feet, brushes himself down. I ask him about the leg. He says a bus ran over it when he was a kid. He was kneeling at the curb fixing his bike.

The film has invaded our lives. In between Rosco’s commercial commitments, we shoot all sorts of stuff, anything that strikes our fancy. Not thinking about a movie or an audience, blindly confident that anything that interests us for whatever reason is worth a few feet of film that might finally find its way into a movie we haven’t yet formulated. I’ve no idea where these disparate bits and pieces, these images and ideas we’ve produced, will end up in the film. I’ve not given it a thought.

I’m driving the MGB wearing a throat mike. Willie is sitting next to me wrapped head to toe in a blanket, an anonymous bundle. She’s wearing a throat mike. There’s another mike gaffer-taped somewhere under the dashboard to pick up engine noise. Rosco is jammed in the space behind the seats with a Nagra recording deck and a small mixing board. The Nagra’s running and Rosco is mixing as we hurtle up and down the newly opened M4 motorway. There’s no script to refer to, none of us knows what is supposed to happen.

Willie starts moaning, wriggling a bit under the blanket. When I change down a gear she responds, a sharp intake of breath as if I’m touching a sensitive place. I raise the revs and she comes with me, sighing as I slip back into top.

Willie and I are beginning to understand what is happening. We do it over and over. One more run. Willie gets into it, rocking under her blanket, making noises like she’s really coming. I put my foot down, the engine noise rises to a whine. Willie’s cries become sharper, letting go, gasping as I slam into overdrive. The speedometer is hitting it’s maximum as she finally comes, screaming, hiccoughing and spluttering. Rosco’s delighted, yelling encouragement. What a fucking sound track!

Nonni consults the I Ching, the Book of Changes, an ancient Chinese oracle. People did this kind of thing in the 60s when curious about the situation they find themselves in. It’s like going to a fortune-teller seeking a clue to what fate has in store. I keep an open mind. The I Ching points to a hexagram, a chapter called Arousing. It talks about creative energy, prognostications of greatness and success. We can live with that. We call the film The Arousing. Rosco gives up his job.

We apply for certification from the Lord Chamberlain’s office for its theatrical release in Britain. He turns us down. Nothing he can actually put his finger on, no identifiable genitalia, nothing like that. His Lordship couldn’t advise where or what we might cut to make it in his opinion fit for public viewing.

In the places we’re likely to get distribution, a refusal from His Lordship is like a rave review. We get an agent accustomed to handling short films. He sells 35mm theatrical rights in Canada and Sweden. A Yugoslav short film festival gives it the Tito Prize setting it up for a long run on the university circuit.

We can’t believe it. This mishmash of ideas, this self-indulgence of images and sounds, is being acknowledged, responded to by audiences. It’s beginning to dawn on me. More than a sense of achievement, the feeling that something outside of me had been contacted. Rosco’s going through the same changes, I can see it in his eyes. Intellect, polemics, dialectics didn’t come into it. We took the leap, surrendered to the muse and we’re being applauded. We can do anything. Revolutionise the industry! Bring truth and grace to Hollywood.

Memoirs of An Underground Filmmaker by Malcolm Hart.

It’s a raunchy story, a biographical account of a successful English New York fashion photographer in the 60s who burns down his career for the insane love of a model. When she’s done with him he crawls back to London where, serendipitously, he meets and inspires a disillusioned Producer of Commercials to return to his crafts of camera/editor to make a unique, unscripted film with him.

Beyond all expectations the film, they name it The Arousing, is a success. Despite or perhaps on account of the Board of Censors failing to allow it a certificate, it sells in Canada and Sweden; in New York it leads to many commissions.

They are underground filmmakers and, through no fault of their own, subject to all the vagaries that weave through and around the life. Michael Lang commissions them to make a film of his Woodstock event expecting an audience of 20,000. When it grows to 450,000 Warner Brothers take over. Alan Douglas commissioned them to make a film of Dr Tim Leary running for Governor of California. Tim got busted on the first day’s shoot. Commissioned to cut a collage film out of forty-two Laurel and Hardy movies they deliver a brilliant sixty minutes but the Producer wants ninety. A film commissioned by a marijuana dealer slips away from them into the hands of a clueless bunch of egotistical actors who snort most of the budget. Commissioned to direct a movie about the fastest gun in the world, the producer favours a Warhol cameraman rather than his partner. The cameraman/editor turns out to be a junky who’s habit infects the whole production and saps the budget. Gauche marijuana deals are made to replenish it. The spliced neg falls apart on the printing machine.

His old partner’s interest in film gradually loses out to cocaine, first as a user then as a dealer then as an importer, he and his wife destined to OD. All is frustration. Broke and depressed he falls back into the warm embrace of a network of friends.

While still a photographer, he had written and sold a movie outline which, when it hit the screen as Vanishing Point, funded more writing. He had an already approved outline for a sexual fantasy. Having difficulty writing the script he meets a graduate of the National Film School and they work on it together evoking between them a sexual affair of an interesting nature.

Another of his ideas, The Confessions of an High Official, is being backed by a London Producer who sends them researching around the world. She falls pregnant in Kyoto and their first child is born in Hereford; fantasy gives way to reality and the importance of work and career recede. Their second child is born as fate would have it in an ashram in Hollywood. He was the midwife.

Apart from reflecting the free-form drug inspired 60s and 70s it’s a moving tale of birth, life and death. A racy, some say addictive read.

You can order copies of both print & ebook editions of Memoirs of An Underground Filmmaker via the links below: 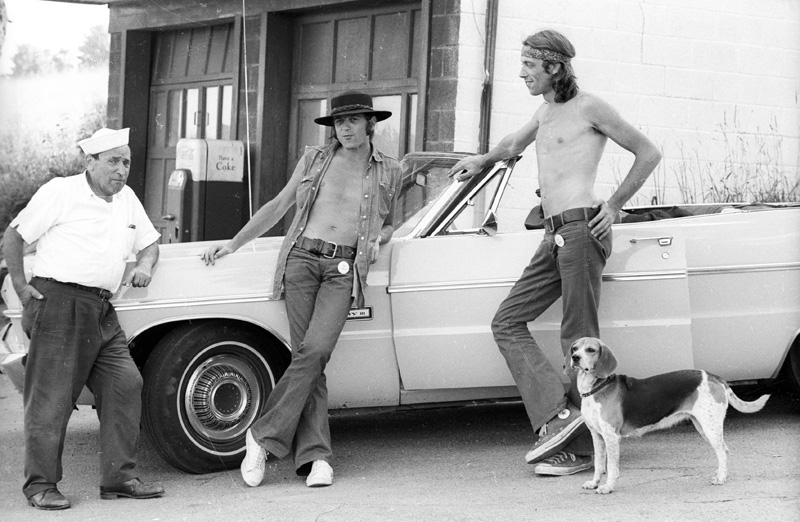 Malcolm Hart and partner (Rosco in the book), with unknown man and dog, at Woodstock 1969.