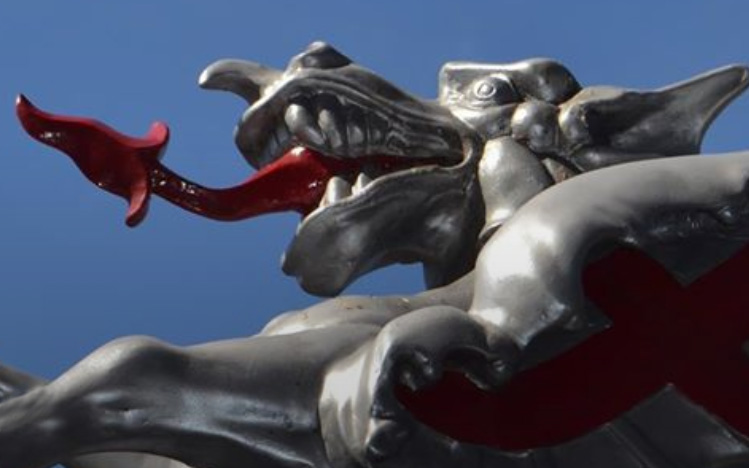 We are a group of independent artists, magicians, pagans, druids, and media workers who plan to hold a series of ritual events in the City of London on the 7th November.

The first ritual will take place at the entrance to the City, on the South side of London Bridge, on the Eastern side of the road, under the dragon, at 12.30, where we will ask the dragon’s permission to enter the City and read the mission statement.

The next ritual will be at to the Monument to the Great Fire, a walk of about six minutes. The ritual will take place there at 13.00.

From there we go to the Bank of England, another six minute walk, where we plan to deposit a £100 worth of spiritually activated five pound notes into the vaults of that great institution.

From there we go to the precincts of St Paul’s Cathedral, where a ritual of forgiveness will be enacted. Journey time approximately 12 minutes.

From there we will go to the Royal Courts of Justice on the Strand, where King Arthur Pendragon, Druid King of Britain, will read out a proclamation on monetary justice, in the manner of the ancient Bronze Age Kings. Walk time approximately 12 minutes.

How you get from site to site is entirely down to you. You can join us at the beginning, or meet us anywhere along the way. You can walk or use public transport, or teleport if you like. Approximate times for each of the rituals is as follows:

16.00: The Royal Courts of Justice. Meet at the junction of Bell Lane and Fleet Street.

Our aim is to bring the subject of money creation to public attention using ritual as our our symbolic tool. We say that money is a sigil, a magical symbol which enters our lives on the most fundamental level, as desire. Money represents the fulfilment (or lack) of all desire in the current world and we carry it about on our persons, in our wallets and our purses, in our pockets and handbags, allowing it to control us on the most intimate and secret of levels.

Money activates us in the deepest parts of our being. Anyone who tells you they don’t care about money is lying to you. If you’ve ever had a wallet or a credit card stolen, you will know the feeling. It’s like a sickness in the pit of your stomach, as if you’ve been violated. It’s not only the feeling that you’ve lost the potential that the money provided, it’s also the feeling that something deeply intimate and personal has been taken away from you. Money is desire and is therefore part of what makes us what we are on the most fundamental level.

People think that they possess money, but we say we are possessed by it. It is an occult force, meaning that it is hidden. It works in the dark. Ritual is the means by which we call the secret forces into the circle of consciousness, so that they can be known and recognised, so that we can speak to them of our desire, so that we can bring love out into the open and release it from its bondage.

The sum total of all wealth in the world is the sum total of all human activity, paid and unpaid, through all time on this planet. Therefore, we say, it must be free. It must be released from its confinement, in vaults and in safes, in secret hoards and offshore holdings, in bullion and bank accounts throughout the world, and made to work for us, for the fulfilment of our desires.

Money is a language. It is the language of trade and exchange, those most human of activities, but also of trust, and is only meaningful when it circulates, when it does the rounds, from pocket to pocket, from project to project, from product to product, and back again.

Money can be anything. It can be breakfast, lunch or dinner. It can be the fulfilment of any appetite. It can mean liberation or enslavement. It can be used for good or evil. Like magic it is morally neutral, but it does not neutralise morality.

View all posts by Nick →
This entry was posted on 27 October, 2016 in homepage. Bookmark the permalink.

One Response to Money Magic