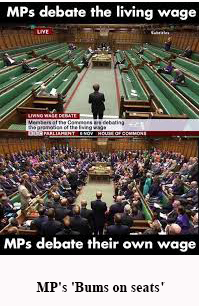 MP’s have demanded wage rise votes for all parliamentary sessions claiming that it’s the only way to ‘get bums on seats.’ Historically the House of Commons has only ever been full when MP’s are voting for wage increases so their demands are known to be popular with government officials embarrassed by low turnouts.

Lord Douglas Breakwater, investigating MP’s demands, chuckled, ‘You’ve got to admit they have a point. Everyone knows politics is boring and for hardworking ministers there is literally no getting away from it, politics that is. So this incentive seems like the right thing to do and instead of letting them vote their wages up once every year now they can do it every time they come to work. Imagine how keen you would be about turning up for work if you could vote for a wage increase by just being there. Never mind just once. Exactly. It’s all about bums on seats.’

Claude Mephistopheles Tory MP for Mid Wessex, fopped, ‘Let me be clear. The public must not think we are greedy. That is not our aim. For this reasons we will only be able to raise our wages proportionately to the importance of the subject we are debating. For instance if we are discussing the living wage, disabled benefit or the bedroom tax then we will only be allowed to vote our wages up by, let’s say £10 per hour but if we were discussing something extremely important, something that determines the very course of the nation, for instance something like increasing MP’s wages then of course, as usual, the sky would be the limit. Yes. Its all about bums on seats.’

MP for Bolsover; Dennis Skinner was also asked to comment and said, “They’re a bunch of two-time-charlie lady boys who wouldn’t last ten minutes delivering milk or the post or God forbid a bloody baby but they’re right about one thing: the House of Commons is all about bums on seats; A load of fat, idle, no-good bums resting on gilded seats paid for by YOU! Voting for your own wage increases: Have you ever heard of anything so ridiculous in your life? Sack the lot of ’em.’

View all posts by Ethan →
This entry was posted on 25 February, 2016 in homepage and tagged current affairs, Ethan Harrison, politics, satire, Social commentary. Bookmark the permalink.