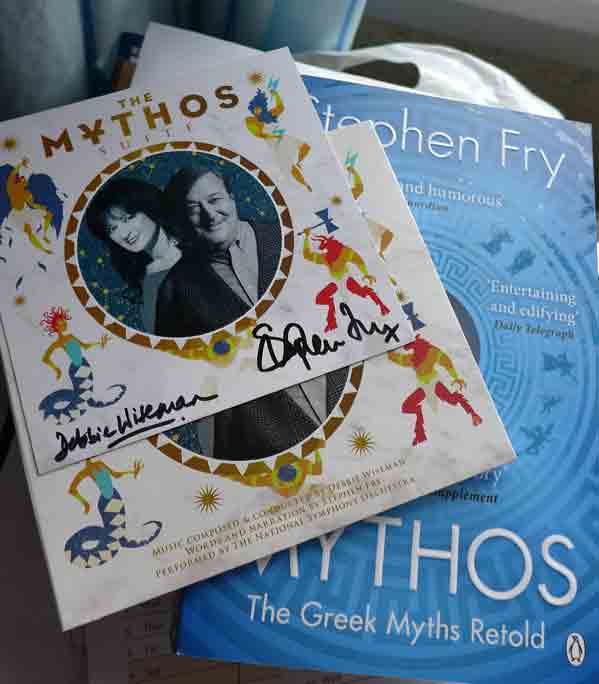 I took my time to write this review. I read the big
book first. Slowly, in digestible, bite-sized chunks. Only then did I listen to the CD, which offers abridged versions of five of the tales, set to music.
And So it Came to Pass, erudite, funny, brilliant egotist, impish, forever-the-naughty-school-boy, Stephen Fry, offers us a tour-de-force. His take on the Greek Myths, creation and destruction. Beginnings and Endings. It all seems very prescient in the midst of the Covid-19 pandemic. With very able and creative assistance from Debbie Wiseman, five of these tales now have a soundtrack too. It’s all very Stephen Fry. Intelligent, irreverent and slightly smutty. But, it’s a thorough piece of research too. The myths and legends become instantly accessible, and can be explored further through footnotes and an informative array of appendices.

Be warned by those Olympian Greeks (and Mister Fry), prepare for Entropy, the return to chaos, and a nice messy, End of Everything!
Here’s a short video about the origin of the Book as it morphed into Musical Suite: 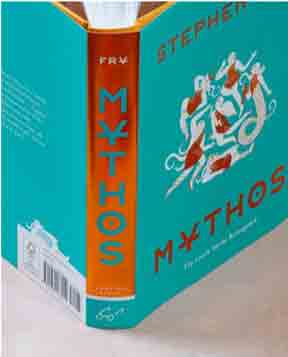 A Greek-centric view of the World

To make sense of the myths, Stephen Fry assembled his book as a chronology and simplified family-tree of incest, murder and Olympian mayhem. It’s still a complex, tangled web, but this does help the reader explore the connections and repetitions in the tales. The Second Order of the Gods is headed up by the Earth Mother, Gaia’s immaculate conceptions. Ouranos, one of her son’s becomes her lover and, as a result, the Sky Father. From there on in, the entire sequence of stories is crammed full with rape, incest, torture, curses, retribution, paedophilia – tempered just occasionally with a love story. Oh yes, lots of shape-shifting too. You never quite know who is immortal, mortal, a muse, a siren, a satyr, nor, whether you are being transported across the river Styx with boatman, Charon, or seized by Hades in his chariot and whisked off to the Underworld!

It’s a roller-coaster set of rides. The book explores dozens of the myths – the musical suite offers just five. The format of the CD is novel. For each of the five tales, you first get a narration by Stephen Fry, enlivened with a musical backdrop, replete with wisdom, humour and the theatricality for which he is justly famous. After each narration, there is the music on its own. The musical-story of Chaos sounds like a missing segment of Holst’s The Planets, whilst the musical duel between satyr, Marsyas on a flute-like instrument called an aulos and the god, Apollo, on lyre, is straight out of Zorba the Greek. But the underlying message is ‘Don’t mess with the gods!’ In this case, the Muses’ judge Apollo the winner and nice, forgiving Olympian that he is, he, “…flays the skin off him (Marsyas).”

Listening to the musical suite, sans the words, I found myself imagining dance and ballet. A filmic and theatrical soundtrack. However, it’s more than incidental background music, and on stage the musical score would work well as an accompaniment to silent film, or, as I suggest, dance.

Most of us know a mixed mish-mash of the names of the gods, from half-remembered Greek, Roman and Norse mythology. Under Stephen Fry’s exemplary guidance we begin to distinguish Zeus from Hermes and Athena from Aphrodite. There’s just so much of it! This is a popular and fun-filled re-telling of the myths, yet it is also a scholarly work, with detailed footnotes and index and some fascinating notes on Fry’s sources.

Some of these tales were perhaps just too gruesome to make it into our early-years’ reading. For instance, the tale of Rhea, who is bedded by her brother, Kronos, only to have successive children devoured in acts of what was obviously a warped kind of brotherly love. Kronos is here described as swallowing his first-born daughter, “…without so much as a hiccup.” Fry also breathes new life into the story of Persephone’s seizure by Hades and her imprisonment in the Underworld. Demeter’s successful search for her daughter, lurches from triumph to partial despair. This is followed by the eventual compromise between Hades and Demeter, after Persephone eats six pomegranate seeds whist residing in Hades’ kingdom of Hell, thereby forcing her to reside for six months in the Underworld (during the ‘Deadtime’), and six months above, when, “…the World sprang into bloom…(creating the annual) cycle of birth, renewal and growth.” Also featured in the music suite is the tale of Sisyphus, who twice ‘tricked death’. But, he in turn, gets his come-uppance when Hermes offers Sisyphus ‘immortality’. All he has to do is push a boulder up a 45 degree ramp to reach freedom and that promise of immortality. “Put his shoulder to the boulder,” as Stephen Fry describes it. So, Sisyphus labours on, never quite attaining the Upper World, having rejected the offer of an ever-lasting life in the (boring) Elysian Fields!

This concoction is very much my personal cup of chai. I enjoy a rollicking good yarn, and this book and CD provide it par-excellence. Stephen Fry in his ‘Afterword’, suggests that his task has been, “…doing my bit to keep them (the myths) alive.” Yet, perhaps the real achievement of the book in particular, as compared to the CD, is to awaken in the reader new insights and quests for knowledge. For example, the way in which we choose to live our lives is explored by Fry in the Appendices, looking at Prometheus as the father of ‘forethought’, and Dionysus representing ‘passion’. Fry chooses a long quote from Bertrand Russell’s 1945, ‘History of Western Philosophy’ to offer some enlightenment:
“Without the Bacchic element, life would be uninteresting; with it, it is dangerous. Prudence versus passion is a conflict that runs through history. It is not a conflict in which we ought to side wholly with either party.”

Tweet
This entry was posted on 25 April, 2020 in homepage and tagged Alan Dearling. Bookmark the permalink.