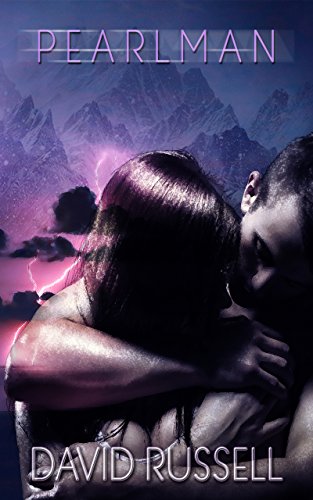 A Novella of the Fantastical that Blends in Science, In a Unique Way
18 January 2018 – Published on Amazon.com
“Pearlman,” by David Russell, is a novella of unparalleled breadth and a first rate work of speculative fiction. It also draws on scientific accounts as it considers various issues, including synchronicities between nature and history. The writing is lush, and it pulls the reader into the story. Myth, history, the earth, and science meet, mate, collide and get compressed and then decompressed into a panorama of the past, present and future possibilities for humanity.
At the beginning, an auto accident projects a not very cautious driver, not into an afterlife sequence, but a pre and post-human life visionary journey through the history of the earth and life on the earth. The moving force, the modus operandi, is incessant change, which breaks down into the play of similars and opposites, in and on the earth, then moving into human history. It then considers the synchronicity between aspects of nature, human nature and human history.
This following quotes convey a sense of both the scope of his vision and beauty of language. Early in the story, the unnamed narrator meets Fiton, magician supreme, who appoints him as his successor, with these words: “With your newfound, absolute mobility, you will oscillate, rebound between past and future at will, restructure the truths of the past, excavate them from submersion in lies and evasions. You will revise and reform the events of the future before they happen, when they are latent in the womb of potentiality. To hone your sense of direction, you will fall from the skies onto the world’s most ancient temple sites, cast down by disintegrating man-made birds. But for the present, now you are fortified. You must return to your next combat and its benign consequence.”
That particularly memorable sequence happens soon enough. The narrator assumes the identity of a Spaniard who kills an Araucanian warrior in battle, which is a part of actual history, then meets the mate of that warrior who just happens to also be an incarnation of the moon goddess. In a magical ceremony they consecrate themselves to the consummation the unity of love and hate. Their love story, with its attractions and repulsions – her lover was her husband’s killer in battle — parallels the generation and destruction in the natural world.
“As we struggled, competed in perfect harmony, the young mountains rose anew in our background. With a metaphysical rope, we had bridged the span of geological time, in the process going through a whole gamut of shape-shifts, embracing all the biological forms. We had willed ourselves and each other into unicellular status and then gone the whole gamut from amoebae to primates.”
In Pearlman’s visionary journeys, some real science is presented. This includes how earthquakes influence volcanic activity, and where life on earth arises – whether in terrestrial warm, moist spots or in volcanic fissures under the ocean.
The narrator continues his journey through the worlds of strife, or opposing opposites, in nature and history. He cites the famous physicist, Wolfgang Pauli, that strife underlies the physical world, which presumably includes the indeterminacy of quantum waves. But synchronicities can be found in strife. The narrator believes that there is synchronicity between the cataclysmic earthquakes and volcanism in Chile, and social strife, which manifested in the Allende period going back to strife among the Araucanian and other Indian tribes and later with the Spanish. He quotes Lisa Paul Streitfeld, Pablo Neruda and Gonzalo Rojas on the play of opposites.
“Pearlman” by David Russell is an inspired work. It is fun to read, stimulates unconventional approaches to knowledge and scientific inquiry, and is written in language that is a feast for the senses.
.
>
Paul Dolinsky
.
.
Tweet
This entry was posted on 24 January, 2018 in homepage. Bookmark the permalink.