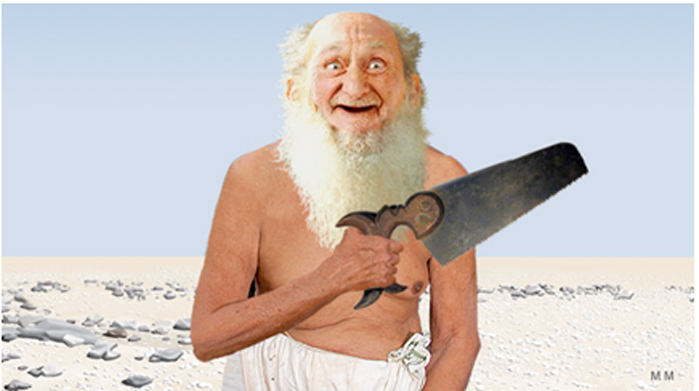 As most children will tell you, one human being alone is responsible for the remarkable abundance of fauna that inhabits the planet. According to the Biblical Genesis, it was Noah, the kindly old gent of antiquity, who almost single handedly achieved what is unquestionably the most spectacular ecological event of all time.

Noah of course, like all Biblical dignitaries, was merely following orders. It was God who had decided to drown all living forms and God who had devised the convoluted strategy for nevertheless saving representative specimens of each.

The story of Noah therefore, really concerns the nature of this God, a God who despairs over the human beings he has created and decides to destroy all but a few of them. As many children will also tell you, it’s a bad workman who blames his tools. What kind of workman is it then, who blames the tools he has made himself… and made in his own image?

Chapter five of Genesis is devoted to a genealogical catalogue of the begettings from Adam to Noah, in the course of which, many daughters are necessarily born into the world. Chapter six begins:

1.And it came to pass that men began to multiply on the earth, and daughters were born unto them.
2.That the sons of God saw the daughters of men that they were fair; and they took them wives of all that they saw…
4. There were giants in the earth in those days; and also after that, when the sons of God came in unto the daughters of men, and they bare children to them, the same became mighty men of renown,

Much has been made of this reference to “giants’ yet what it refers to is typically ambiguous. Having briefly alluded to them, our reporter moves abruptly along to describe how God’s sons had been cavorting with the local girls and how popular their offspring became in the neighborhood. There’s a vague implication that it’s they who were giant, but this would have created obvious sexual complications. It would also have placed God’s punishing routine beyond the pale. He has already unfairly sentenced women to painful childbirth and now he’s allowed his sons to impregnate them with enormous children. We must assume therefore that their mightiness was of an intellectual nature. They were of human stature, with sexual proclivities to match.

(I was under the impression Christianity was FOUNDED on the idea that God – this same God – so loved the world that He “gave His ONLY begotten son” as its redeemer. That being the case, where do this lot fit in?)

Whatever the nature of these other sons of God may be, the fact that they are subject to the same kinds of sexual urges as hyenas and muskrats and apparently comfortable with the idea of ‘settling down’ makes them remarkably ungodlike. Conceivably there are no women of their own stature where they come from – and they must come from somewhere, since conventional fatherhood, suggests conventional space/time orientation and makes them subject to place. In their defense, having a father who is omnipresent does make home life a little cramped. This might account for why there is no mention of their mother. With God being everywhere there is simply nowhere to put her. How she produced sons is a conundrum of Einsteinian proportion.

Regardless of their home life, their father not only condones their behavior toward earthly women, but He even betrays a certain grandfatherly pride for their offspring – in verse four that is.  In verse five, immediately after His family has entered the picture, God decides that things have gone seriously wrong.

5. And God saw that the wickedness of man was great
in the earth, and that every imagination of the
thoughts of his heart was only evil continually.

Who’s now got a problem, a problem that will confront countless earthly tyrants, despots and political crooks to come who find themselves exposed behind the curtain. One that has but a single simple blatant solution:

Destroy the evidence and blame someone else.

Having blamed his own creative shortcomings on Adam and Eve, He places the responsibility for His family’s unruly behavior on the entire human race – and just to be on the safe side – everything else as well.

GEN. 6: v.7 And the Lord said, I will destroy man whom I have created from the face of the earth; both man, and beast, and the creeping thing, and the fowls of the air; for it repenteth me that I have made them.

He’ll drown them all, guilty and innocent alike, right down to the unborn children. Only one man and his family will be saved, along with representatives of each of the life forms that now infest the planet.

Six hundred year-old Noah, whom one would think had already had more than his share of living, pops up out of nowhere to do the job; similar to the way presidential candidates do, with no indication of their particular virtues. In a part of the world notable for its sparseness of vegetation, he is instructed to build an enormous wooden boat, the technical and practical impossibilities of which are far too numerous too mention. The significant fact is, that when the rains come, anyone not on the boat will die, which prompts the question, what happens to God’s own grandchildren? Were they to be airlifted out at the last minute, Saigon style, or will God drown them along with everyone else? To top off his contradictory, arbitrary, forgetful, bullying, deceitful personality, does he now murder his own family? It’s a Prozac nightmare. What kind of heavenly Father is this? More importantly, is this the image after which we were created?

This motherless God of the Bible clearly has little respect for womankind. It was Eve who was blamed for His initial shortcomings and now the daughters of men who are to be unfairly punished for the behavior of His sons. Just like the snake they will get off scot-free. If a snake had indeed been responsible for the derailing of His perfect world, it seems now would be the perfect opportunity to be rid of such reprehensible creatures once and for all. Instead He allows two of each species onto the boat. Given that the order Ophidae contains some 5,000 members, that’s a total of 10,000 vipers, rattlesnakes, mambas, boa constrictors etc in all.

Being omniscient means a knowledge of all things: those that are, those that were, and those that will be. In that respect the God of the Old Testament does on occasions exhibit proof of such talent. As well as forgetting that some things have already happened, however, there are times when He clearly forgets that so far they haven’t. His instructions regarding “clean” and “unclean” can only have appeared to Noah as nonsense compounding folly.

The definition of these terms will only become apparent to the world, when God Himself reveals it for the first time to Moses – a few hundred years in the future – yet Noah has to somehow figure it out for himself in no time quick. In the context of a world about to be completely flooded, the cleanest of creatures one might assume would be those in the water, but in this matter alone Noah reveals his suitability for the job.  Not only can he build a mile long boat in a desert and summon representatives of all the world’s creatures to climb aboard it, but he’s able to assign seating arrangements based on God-given, futuristic, instructional gibberish.

With clean and unclean alike, safe and sound in the floating madhouse, the deluge goes ahead on schedule, and our heavenly father establishes once and for all, his obscenely violent, arbitrary, bullying nature, and imperviousness to the suffering of the souls He has invested.

Seven months and seven days later, the water abates and the boat comes to rest on a mountain of mud and dead children named Ararat. Four months after that, the improbable zoo finally disembarks, and two by two, sets off for the four corners of the flat circular earth to be fruitful and multiply – yet again. And we’re back to square one.

In the course of all this slaughter, God has apparently reached several conclusions – one would hope as a result of seeing all those desperate bubbles rising to the surface but not so. It comes to him in the course of yet more carnage.

Despite the fact that He’s just drowned countless, caring, loving, innocent souls, He now insists for a finale that Noah select “of every clean beast and of every clean fowl” and offer burnt offerings on the altar! Imagine: after seven months of being cooped up on a boat to avoid being drowned you finally step out into the fresh air and get set on fire.

GEN.8: v20. And the Lord smelled a sweet savor; and the Lord said in his heart, I will not again curse the ground any more for man’s sake; for the imagination of man’s heart is evil from his youth; neither will I again smite any more every living thing, as I have done.

The smell of burning flesh inspires Him to admit once and for all, that people – whom He has created – are just no darn good. Punishing them is a waste of time. Never again will He go to all that trouble. Unlike a car manufacturer who owns up to faulty steering and recalls his product for modification, God simply shakes His head and says “Whaddya gonna do?” He gives up. Rather than try to fix them – which he should be able to do, He is God after all – He leaves them the way they are.

Not only has He once again demonstrated all too human fallibility by doing something then admitting it was wrong, but He now adds a kind of lazy defeatism to His modus operandi. As if the real reason for all that water was simply to wash His hands of His own responsibilities. Everything else was secondary, an insight that only occurs to Him as thousands and thousands more unwitting life forms go up in smoke – learning the true meaning of “cleanliness is next to Godliness”.

And 10,000 snakes slither away laughing.

The Bible is presented as historical fact. To include the farcical series of improbabilities and fictional nonsense that constitute the ‘story of Noah’ is tantamount to suggesting that Popeye the Sailor was an actual American figure. In the same way that a witness who gives false evidence once, loses all credibility, this mixing of fact and fiction invalidates the book’s historical claims entirely.