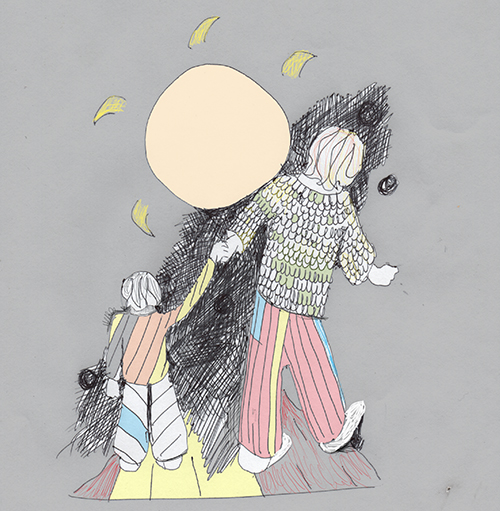 Nobody wears a tattered plastic mac, grey felt slippers, and stands with her carrier bags on the corner of the street.

Nobody lives out of a suitcase he carries round. It could be empty. Assume it isn’t, then at least he has something.

Nobody was playing with binoculars today, peering across the street at the people staring at him.

Nobody plays the fruit machine in the pub, until his coins run out. Then he stands sheepishly watching the others. Sometimes he drinks a coke, very slowly, as the reels spin.

Nobody sees hours I only dream through. Walks through the night, passing time, keeping warm. He gathers his layers around him, walking past blank windows.

Nobody is young when you get close up. He grins and carries on with his window shopping. His greatcoat gets dirtier each week, his hair longer. He lives on chips and cigarettes.

Nobody scares the children because of his crippled arm and squint. Only his son reaches out a the school gates. They walk home holding hands.

Nobody is at the window, but the curtain has just dropped back into place. Later she calls you when you walk past her door. You talk about the weather.

Nobody talks for hours. She loves her cats, and loves to visit. She would buy all the pet shop kittens if she could.

Nobody always smiles if you say hello.

View all posts by Rupert →
This entry was posted on 10 November, 2016 in homepage and tagged nick victor, Rupert Loydell. Bookmark the permalink.