ONE CELL OF A GUY 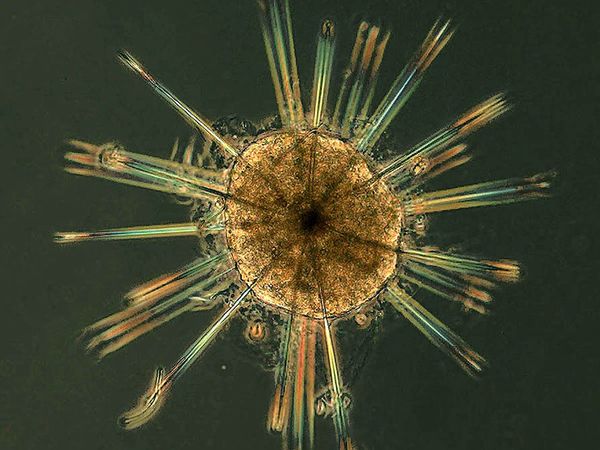 Imagine you are a being for whom life moves incredibly slowly.  So slow in fact, that four billion years for us humans would feel like just 24 hours to you. Perhaps you are an incredibly slow being in a culture remarkably like ours; it might sound implausible but does make explaining vast expanses of time rather easy.

So as this incredibly slow life form, you decide to go on a 24-hour, epoch-stretching drinking binge. It’s New Year on your slow moving planet and you intend to celebrate. You roll up at a bar on New Year’s Eve at 12 midnight, a good 24 hours before the clocks are set to strike and herald in the New Year. You notice a screen is showing a rolling news programme called ‘Planet Watch’.  All that seems to be showing on the screen is a planet of newly formed rock, inhabitants of which will later call earth.  Not much seems to be happening on the surface cam down on earth; the planet looks pretty hostile.

You sink your first beer slowly (even for you), you look up at the screen; the planet now seems to have solidified and water flows over the surface.  You find a newspaper to kill a bit of time. It’s still the small hours of the morning and the bar is all but empty. There’s only you and a pale, unfriendly barman in a faded t-shirt.

After two hours of crosswords, sudukos and another beer you gaze back up at the screen, you notice a clock on the corner reads 3.12am.  At last there seems to be something happening on the surface cam.  Something seems to be swimming about in the water, well, floating at least, and it kind of looks alive.  The miserable barman has the sound turned down on the TV so he can read his book.  You approach him to ask to turn it up; he shakes his head and lifts up his hand, not moving his eyes up from the page.  You slump back down in your seat, defeated.

You strike up a conversation with an old guy who’s just wandered in, it’s 3.44am. A Newsflash appears on the screen, ‘LIFE MAKES ENERGY FROM THE SUN’, there’s some expert talking in the studio about how monumental this is for the life of the planet.  You miss most of what’s being said as the old guy seems intent on telling you all the brands of cigarettes he’s ever smoked and how their packet designs have changed over the years.

At 5.20am you look up and the screen reads ‘ONE CELL OF A GUY’, the bar staff has now changed over, the sound has been turned up once again.  You watch for a while as an expert explains how there is bacteria on the new planet.

Nothing seems to happen for hours and the news programme keeps repeating the same footage over and over. The same tired interview with the same scientist plays again and again. It gets to the point where you can repeat it word for word, which you now do to anyone who walks into the bar. This doesn’t make you very popular. By now you’re quite drunk.  It gets to lunch time and the screen is still showing the same footage, nothing has happened.  By 3pm you are really drunk and you fall asleep in a quiet corner.  You awake to find the same interview and the same footage, nothing has happened. You think you must have only dozed off for a second but the clock reads 7.30pm. It’s been the same for hours!

The evening begins and the bar starts to fill. By now you are shit-faced and you order some food and a coffee – the food and caffeine sobers you a little and gives you just about enough clarity to focus again on the screen. It’s a little after 9pm and the planet looks frozen.

It’s now 9.07. The planet thaws. It looks like things have finally changed, something with more than one cell is wandering the earth – animal life has begun.

You sink another couple of beers. The night really begins. You get lost in conversation. Somehow, despite the amount of alcohol in your system, you have command of the table you’ve been sat at all day and all night and the time just flies.  ‘IT’S A RAT RACE – THE FIRST MAMMALS ARE HERE’ flashes on the screen but by now you’re caught up in the bar, singing away with your new found friends.  Out of the corner of your eye you see at 11.40pm that dinosaurs have become extinct. ‘God, that seemed quick’ you think to yourself as the jukebox plays your favourite song.

The countdown to the New Year begins; it’s 11.59. You catch your last glimpse of the rolling news: ‘MAN APPEARS’.  The clocks strike midnight, the planet is bang up to the modern age and you’re hugging complete strangers.  You never get to see what happens next as someone turns the TV off.

What a creature like this could observe on our planet is very difficult for us to imagine. Whole species would come and go in a blink of an eye.  Human life would barely register, ‘civilization’ as we know it would have only existed for a fraction of a second.

What is clear from seeing the world on this time scale is just how long life remained as single cell lifeforms. The earth has been dominated by single cell life forms for over 3 billion years. For any observer this would have been pretty dull.  In the vast scheme of things animal life is really very recent, very newly evolved. Some would argue that despite our complexity we are still very much like our unicellular ancestors. We do share a lot of their DNA and it is thought that we carry 10 times more bacterial cells than human cells. That is, we are host to countless bacteria in our guts, on our skin and in every colonisable part of our body.   Even our human cells have parts, or organelles, still very much like ancient bacteria.

What’s more, our habits as a species are in a way very much like similar organisms.  Bacteria and viruses tend to cluster around a food source, exploit it, breed like mad, exhaust it and then die or move on.  Humans, as Agent Smith in the Matrix put it “multiply, and multiply, until every resource is consumed. The only way for you (humans) to survive is to spread to another area.”

History is littered with this kind of behaviour. Consider the story of Easter Island. Its inhabitants flourished and built up a complex and ordered society. However, they were not a society with much forethought –they stripped the once forested habitat of trees for fuel, building materials and to aid the building of the island’s characteristic stone heads. This exposed the island to sea winds and not only eroded farmland it also prevented their only means of escape from the impoverished landscape.

Take a look at a city from the air and you can see once again our bacterial-like behaviour in action. Most cities began by clustering around where food would have entered the city – the rivers, London growing up around the Thames being the prime example.

This has changed in recent years as oil has become our main resource, we rely on it and other fossil fuels for almost all facets of life.  Most importantly our food system heavily relies on fossil fuels, especially oil, and it is running out.

Just like bacteria we are breeding at a phenomenal rate but unlike these single celled life-forms we have nowhere to move to once all the resources have gone.

We Homo Sapiens, the only bi-pedial great apes, are capable of predicting future events such as these. We know that our days of limitless energy are numbered; we know oil is coming to an end yet at present we don’t really seem to be doing anything about it.

The burning of fossil fuels goes on unabated, changing the environment beyond measure, putting our very existence as a species at stake.  One scenario predicted by climate scientists suggests a phenomenon known as runaway climate change.  This predicts frozen methane usually locked up in the oceans, or in the permafrost of countries such as Siberia, will defrost compounding the action of carbon dioxide in the atmosphere on the earth’s temperature.   This will send temperatures soaring far higher than that capable of sustaining life or, at least, far higher than temperatures capable of sustaining multi-cellular life.

Archaea, ancient bacterial-like life, has been found in the most inhospitable parts of the globe, in glaciers, in the hot vents of the ocean floor and even in volcanoes.

The planet was theirs for 3 billion years, and if we continue they way we are it might be theirs again in the not so distant future. Perhaps they’ve been in waiting for an idiotic species such as ours to appear to manipulate the planet and reset evolution back to their advantage?  Let’s face it, there are not many other rational reasons why we are act the way we do.

However, I’d like to think, we ARE more evolved than bacteria and we DO have our own will.  I’d also like to think evolution is set to play out to produce even more complex life on the planet, life beyond the current limits of our imaginations.  But in order for this to happen we have to stop acting like our ancient single cell ancestors and make the future of this planet a multi-cellular one.

Tweet
This entry was posted on 21 February, 2013 in homepage and tagged bacteria, Dave Hamilton, human evolution, monocellula vs. multicellular morality, One Cell of a Guy. Bookmark the permalink.