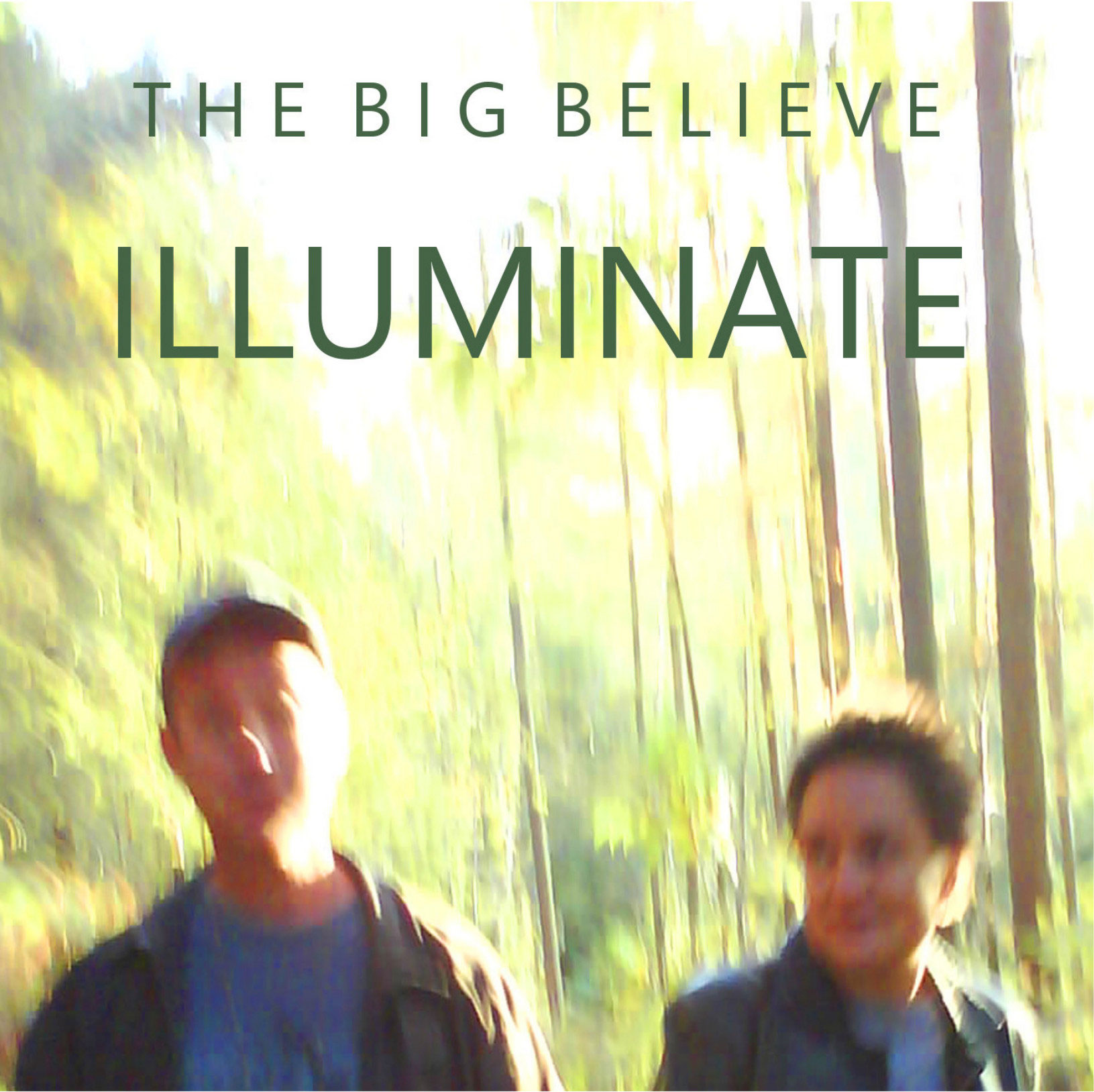 Have we unknowingly witnessed the death of the song? At a time in which originality in terms of limited forms is a matter of arrangement over direct innovation Amanda Thompson has arrived under the guise of her band name The Big Believe to deliver ILLUMINATE, a collection of varied tempo ballads that restore classic pop song writing to the highest standards of achievement. Each track is a heartfelt delivery and call for emotional reformation, proffered to us on waves of softly focused, melodic poperterica, wonderfully easeful arrangements and the sweetest of voices. The lyrical demands are simple but ingenious calls for change and at 39 minutes and 46 seconds this elegant release is the perfect pop artefact for a public normally averse to treasuring the rare pieces of gold studding the muddied and addled age to which we are living and attuned to, like an abandoned, post David Lynchian ear.

Arriving on a driving and insistent guitar chug, Creatures,  the opening track on this sublime album of melodic and harmonic treatments, calls on us all to ‘follow our leaders and turn into creatures tonight’. It’s safe to say that The Big Believe do not want us to become a nation of Tory smeared mutants of conservatism, but rather ones of resistance and self awareness.  In ‘whispering something into our perfect ears,’ the ease of Thompson’s voice soothes and opens the record with the kind of likeability all pop music needs if it’s to be met only half way. In this instance the music invites its own welcome, a gentle vampire keen to transfuse all they have taken, restoring and re-colouring the song of survival and change.

Ambiguphobia’s accusatory bassline stutters and ushers itself into being, with a deftly inventive winding melody and a wonderfully expressionistic lyric in which ‘Your eyes are red/You are blue/But don’t expect me to cover for you’ creates among its protagonists the sense of ‘an urban disturbance.’ The ambiguity of modern life and love is therefore delivered along with variations that transform clichéd phrases elegantly and effectively, through lines such as ‘Stone the crows/Heaven knows there is blood on the riverbank.’  The wonderfully sparse yet fully realised guitar pop on which such sentiments are delivered revitalises those limited forms previously mentioned, revealing them to be the necessary links between the heart’s desire and the throat’s reverberance. Indeed, the song’s coruscating refrain of ‘I’m never never never never lying for you,’ shows how these wonderfully impressionistic lyrics connect with the title to create a fully satisfying meaning, all within the three minute format.

Hands, Heads, Triangles is a classic in conception and practise with its majestic piano line. You may keep your lighters in your pockets but your eyes will not stay dry and your hearts will not be able to resist a tremble as you listen. There is something in the chord sequence that rises above the familiar and connects to the best parts in all of us. And the words chosen provide a true sense of completion as the ensuing verses ask of the listener/subject to ‘Follow me down…to where no one’s around…and we can see space…our hands behind heads… a triangular shape as we watch the stars..’ In these standard chords and notes a simple gesture is poeticised and its description lifted to the point of anthem. In effect, this is a small miracle of voice and notes that shows how the reduction of expression allows for a greater flow, uniting the earthly experience of all of us to the cosmic recognition of the few. In Amanda Thompson’s hands the beauty of normal experience is celebrated through the notes she channels through her hands and mouth, and the back cover photo of her as a child adds to the affection one feels for both the music contained within this CD, and its maker. This is echoed delightfully as the song shimmers to a beautiful conclusion of piano, soaring synth strings and gently shaken tambourine.

My Automaton’s call for the singer to be the lifeblood of her own object of desire, in order to re-energise or propel them into action, reveals a song that speaks of the great indie bands of the 80’sand 90’s, from Felt to the House of Love, with elements of The Commotions thrown in for good measure. As you listen to the album, what strikes you most about these songs is the careful arrangement of space, silence and structure in and around them. This showcases the power off the multi-instrumentalist, especially when they possess Thompson’s understanding of the music they master (or mistress) so completely.

Wired is a dreamlike weaving of its intentions, telling of someone who is not ‘a typical guy, or a typical girl,’ but is rather just wired that way; a pansexualist perhaps who reflects and no doubt represents a society no longer intent on obeying previously accepted rules of desire, and is searching for new forms of perception or understanding. There is a Blur type drive to the construction of the song that links the aims of their album Leisure to that of 13. Its energy and enthusiasm are infectious and add to the album’s careful adjustment of pace and intention, while still observing a common tone and approach.

Conversely, the following track Illuminate, has a touch of Oasis in its winding verse melody, as if Thompson was asking us to balance and consider the period when British pop music still meant something more to its practitioners and consumers, beyond the shallow demands or desires for fame. This is perhaps an unconscious intention on Amanda’s part but on listening I hear those traces and progressions, as if she were cleverly commenting on pop song formats and styles in order to tell her own tale and set sail her own musical vessels on the congested seas of receipt and unanswered renewal. Indeed the softly sung la la like waves of the song’s ending wash the piece away, helping it to cover an aural landmass greater than those infusing and playing from a forgotten platform, half of the known world away.

Great Things Blast has a wonderfully explored musical trigger line with a bass riff that births the song and allows the singsong elements of the vocal to weave insistently around us. As the song opens up there is a controlled power offered that asks the listener to join with the protagonist to ‘feel the blast machine’ that she hopes ‘makes your day.’ Here then, is a playfulness delivered slyly, exemplified by the line ‘Feel it in me/Killing Softly’ and clearly meaning more than just the song of a mysterious muse, but rather, the need to express the desires we all feel and fall prey to, and dare I say it, Illuminate them.

Pay for Soup has a delightful Throwing Muses type feel and you hear Thompson calling with a resonance and sweetness for the subject/object to ‘break the fourth wall and join with the city.’ The song is a call for both freedom and collusion, a joining of person and place, and indeed, there is a feeling in all of these songs of the need for and insistence on much needed forms of direct communication. The singer is invoking and provoking her muse into action and asking for a greater light, that these almost themed songs, ably represent.

Lost in Reverie’s spidery guitar line show how melodies plucked from the air can be pushed towards the road of strings and create structures of response where emotion can be effectively housed. Thompson choruses herself and becomes the girl-band in everyone’s head, the personal ensemble of choice there to comfort and contrast with, forever ensuring that there will be, in time, some form of lasting light for those who are stumbling and for those whom the darkness will always allow to be lost. The illumination necessary is sourced from within and these songs to me are the soundtrack of a personal and general discovery to be shared by the many,  that banishes the migraine of confusion and restores or sets the creative hand into play.

Closing piano ballad, You Already Are, swoops in and away like a brow of birds heading over the sea, chasing concerns, worries and conflicts away. It is the effective summation of a gently voiced commission in which those attentive to the message seek whatever light is left to us to be shared and offered. What is the big believe? Not just the name for a solo musician assuming a band identity, but rather the generic title for the event or activity that occurs when one is listening to all effective and affecting music. We play it to alter the space around us. We use it to colour the air. In this artful and charming album that air becomes something infused with feminine courtesy, sensitivity and intelligence. Where others are brazen, Thompson is considerate. While others rattle and disturb she seeks to console. This is music as companion, there to prepare us for greater journeys and more expansive preoccupations. It is the presence and the contribution of a sister to the heart and a friend to the flesh. As the album ends with intricate guitar twisting, the listener has been refreshed and emboldened. Like all worthy artists, The Big Believe allow you to create your own art. That may happen through your own hands and mouths as they play and prepare, but for now it remains in your ear. Illuminate your own darkness and check out. 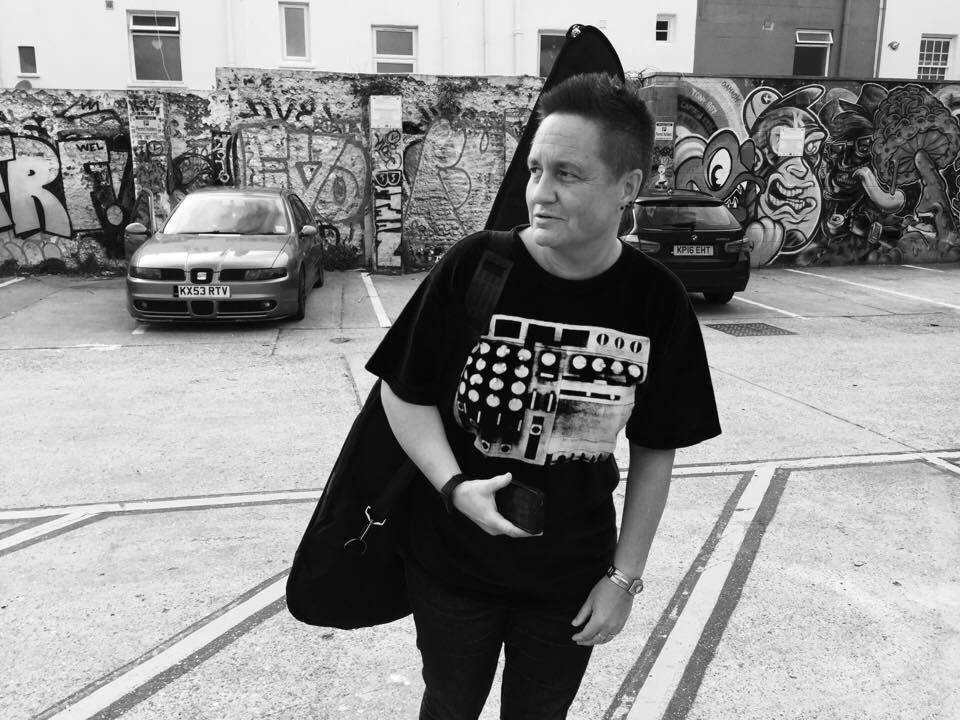 Tweet
This entry was posted on 26 July, 2017 in homepage and tagged David Erdos, Keith Rodway. Bookmark the permalink.