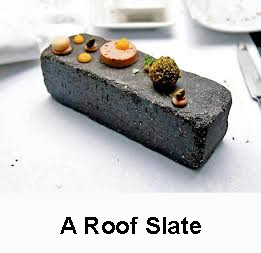 This is the staggering conclusion made by renowned sociologist Professor Albert Ludus in his new book critiquing postmodern culture titled  ‘NO! It really is that simple.” In the book Professor Ludus asserts that the slates, tiles, bricks (and other building materials) currently being used instead of plates in 75% of UK restaurants are, not only an infuriating yet unavoidable aspect of modern life but, in fact, the assimilation of a value-distorting revolutionary cultural ideology hidden deep within postmodernism that will ultimately ensure the downfall of western civilisation.

Speaking over dinner at a restaurant in East London the professor attempted to explain his theories, “Within this irrational obsession of eating off everyday objects instead of plates we see the epitome of postmodern ideology: the transcendence of man’s super ego – in this case his powerful desire to socially assimilate – over the truth: i.e. the plate simply does not work and his peas and gravy fall on the tablecloth. This arbitrary accommodation of illogical dogma has the same effect as telling a child that it will go to hell if it does not conform to the most perverse religion and, over time, causes long-term cognitive dissonance. With regard to politics the postmodernist orientates themselves accordingly, valuing the skewed dogma over rationality. When society embraces the habitually stigmatisation of logic, I’m afraid all you are left with is a theoretically insane population incapable of making the serious political decisions necessary to prevent representative government being replaced by a single synergised military, industrial complex. Yes – it really is that simple. Bollocks! My salad keeps going all over the place. Waiter!”

The latest Tweets from We Want Plates (@WeWantPlates). The crusade against serving food on bits of wood and roof slates, jam-jar drinks and chips in mugs. Tweets … 2017 Twitter; About · Help · Terms · Privacy · Cookies · Ads info ….. This week we’ll be retweeting the best (or worst, depending on your perspective) pics of …

BuzzFeed UK – We want plates. Not slates. Not tiles. PLATES …

View all posts by Ethan →
This entry was posted on 19 January, 2017 in homepage and tagged current affairs, Ethan Harrison, politics, satire. Bookmark the permalink.