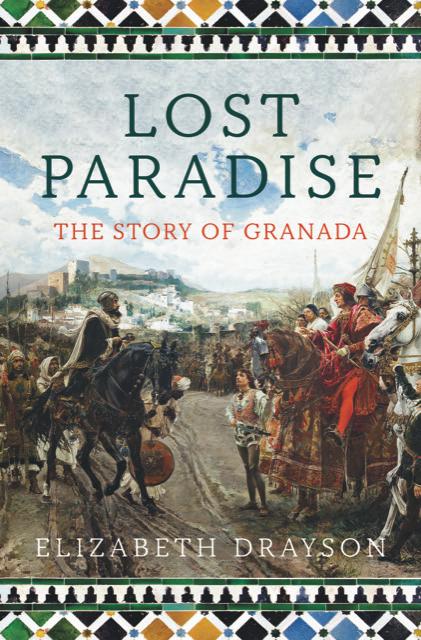 As I write this towards the end of September the Autumn mists are beginning to gather and the mornings are once again cold: the last few days have seen a definite change as the equinox sees in the end of another year.

How timely therefore to read a wonderful new book by Dr. Elizabeth Drayson, Emeritus Fellow in Spanish at Murray Edwards College, Cambridge. Lost Paradise: The Story of Granada (Head of Zeus, £35.00) is an especially evocative book that is also illustrated throughout in the way we have come to expect from Head of Zeus.

Granada is situated at the foot of the Sierra Nevada mountains in the region of Andalusia in Southern Spain and its history is as rich as the finest Oloroso that Spain has to offer. As for myself I am a keen fan of the Andalusian Hemipode, a rare species of oddly named Quail about which I know nothing about except its rather baffling name.

A city of great beauty and immense charm, Granada has an extraordinary history that takes us from the beginning of history, through the Middle Ages and into the modern age. And into its very heart comes the story of the Umayyad Dynasty, the Islamic Caliphate that confronts us at every turn in the architecture of this astonishingly beautiful location.

Prior to this period Granada saw both Roman and Visigothic influence filtering through its metropolitan veins, but once the Caliphate arrived Europe literally met the Middle East in the art and architecture that soon proliferated in and around the city.

Drayson’s book is a labour of love and it tells: there is a passion in her writing, in every detail that she has to offer about the history of the region, its culture, its art, its architecture, its climate and its overall colour. It tells the story of how the Muslim Kings succeeded against great odds in making Granada a beacon of the region, more known in recent times for the Italian Spaghetti westerns of the 60’s and early 70’s, film that offer us a version of aridity that radiates out form the human characters involved in the various and exaggerated plots. But landscape defines civilisation, it defines the cultures that set their landmarks upon it. As Drayson points out Granada’s, which became the capital of Muslim Spain in 1107, is positioned on the edge of the Sierra Nevada ‘gave it a strong defensive advantage and its urban confines met the Granadan vega, watered by the latest Arab technology, which supplied a bounty of fruit, nuts, vegetables and grain crops to the inhabitants of the city, as well as acting as a defensive barrier. The Nasrid kingdom was bordered by the abundant coast along the Mediterranean Sea form Gibraltar to Almeria and by mountain ranges interspersed with fertile valleys and plains, giving it an alpine dimension.’  The entire book is beautifully written as a peon of praise to the ‘fundamental features of the Muslim city that were put in place during the eleventh century. The church of San Jose was superimposed on the site of a mosque built in that era, whose minaret is now used as the bell tower.’ Even a thousand years ago recycling was at the top of the agenda.

This is a gloriously illustrated book as compelling to look at as it is to read. It is well worth its £35 price tag.

The Book of Geoffroi de Charny, Ian Wilson and Nigel Bryant (Boydell Press, £60.00) is a delight. Written in around 1300’s Geoffroi de Charny’s year of birth is unknown, however, Jean de Joinville, his maternal grandfather, instituted a memorial for the anniversary of his Marguerite de Joinville in 1306. Marguerite was Geoffroi’s mother and so we have an approximate date for the writing of his own book, a book on the ordinances of chivalry that speaks to the young and beseeches them on how to act and how to properly behave. It is the most pragmatic and direct of all the surviving chivalric manuals and, as a manual on how to live life it speaks to all parents today about the vicissitudes of parenthood and the guidance of the young – in all of us.

The translation is clear and concise and beautifully delivered in an unpretentious but informative style that allows the original author to speak to us from across the centuries.

‘You’re fifteen: it’s time to take to the fields, to take up arms. I do believe there’s a fetching young maiden who’s captured your heart; think how new might reach her of some great deed you’ve done, that she might love you more! But don’t forget God! Take care you’re possessed of honour, largesse and courtesy, and show humble respect to all….and never let wine get the better of you – or pride. Those are two sorry stains: where they find a place the Devil will fix them fast: they stop a man doing anything good and lead him to do all manner of wrong – they incite all the basest sins.’

Geoffroi’s words have an echo in today and they will continue to echo down the ages. One gets a firm sense of the paternal in his musings, a sense that here is a man who has experienced all of the things against which he declaims. This reads as a personal testimony and therefore the words are warm but with an edge.

It was written at the time of the Hundred Years War and gives us an interior view of the knight and chivalry in the mid-fourteenth century. Geoffroi is giving a close-up view of it. Of this he both accepts and rejects in equal measure: gilding what he accepts with his own experience and damning what he rejects with the conclusions of such experience.

I was intrigued by the Title because Ian Wilson is known widely for his previous work on the Shroud of Turin the disputed relic of Christ said to have wrapped his mortal remains immediately before the Resurrection. The relic was condemned as a forgery in 1988 as a medaeval fake – one that first appears in history in association with one Geoffroi de Charny. Wilson writes informatively and in detail about de Charny’s career and his writing. At times moving and at times very profound this is a well-rounded and thoughtful book that leaves you with a taste for more and, though it is scholarly, it does not exclude the general reader. I was utterly absorbed and enchanted by it in equal measure. 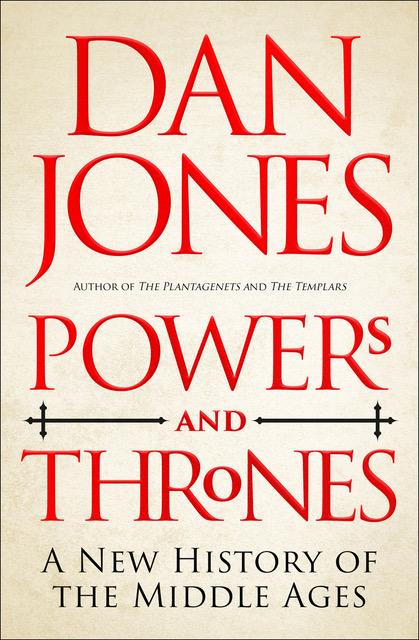 By the same token Powers and Thrones by Dan Jones (Head of Zeus, £25) is a rip-roaring read and exhilarating to the very end. The purpose of the author is to demonstrate how we are still living with the consequences of some of the events from this period. Starting with the Romans and working his way through to the Byzantines, the Arabs and then onto the Franks followed by the Crusaders. Jones tells a thoroughly well-researched set of stories that leave us in no doubt about this extraordinary period of war, art, culture and belief that both absorbed the influences of the period and conflicted with them to the degree that the author does indeed succeed in making appreciate why this period still resonates down to today. The most obvious example of this is of course the Crusading period. East and West tell both their stories in this absorbing book: both conflicting and yet, the true horror inflicted by both sides but, it must be said, particularly by the west is a series of deeds that makes many Muslims shudder to this day – and quite rightly so. The great irony of this is that Islam preserved so much from the classical period that was subsequently destroyed by the nascent Christian Church and in the general melee when the Roman Empire collapsed that we forget that at the outset of the Crusading era the Church gave firm instructions to seek out and destroy. Thank goodness the crusaders failed in the attempt: for it was from Islam that were able to absorb and to learn so much – to the degree that upon their return to the West the Church finally was able to be challenged and to be held, minimally at first, to account.

The preservation of Classical culture by the urbane and enlightened Muslim culture was to leaves its very impressionable mark upon the West during the period of the Enlightenment. This is an extremely important book in that it gives us a perspective that oversees the whole and that, now we live in more secular times, opens us up to the failures of Church policy and reveals its true aim.  The Medaeval period was the clash not merely of ideologies but of religions – and that is precisely the inheritance that we have been bequeathed into the modern period.

This is a timely publication and one that tells its story with aplomb and not a few surprises.

And now onto a lighter theme. Cici and Her Best Friend Zulu by Shing (Amazon, P-bk, £12.95) is an enchanting is a delightful excursion into the realms of the childlike but from a very different perspective. IT also has the great advantage if being illustrated by the wonderful Charles Newington, designer of new Hill figures to be seen all around Folkestone in Kent, an enterprise drawn entirely in inspiration as an echo of the hill figure of the White Horse of Uffington in Berkshire.   This book is great fun and, as an admirer of children’s books, particularly of their illustrators and writers it is great to be able to get lost within this dizzying array of quirky writing and wonderful images. Highly recommended. 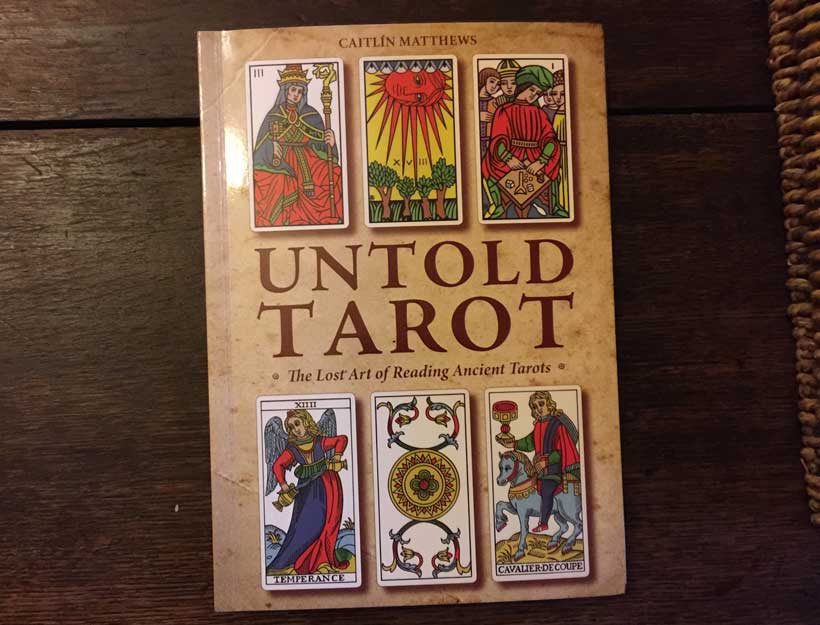 And now onto one of my favourite subjects at present: Untold Tarot, Caitlin Matthews, (Red Feather £24.99) is a beautifully produced book and full of fascinating insight into the workings of Tarot and its mysteries. I am personally interested in this particular subject as you’ll have noticed from my previous reviews where I have made a point of mentioning individual packs that have taken my fancy. I love the artwork and the overall feel of these individual packs of cards, although I am certainly not adept at using them as others are. The early ones are particularly fascinating and this is what the author brings out in her new book about the subject. My favourite decks were ones that I had seen in other books in childhood: it was the Aleister Crowley and Tarot de Marseilles cards that took my eye and here we have a concise rediscovery of the latter written in an. Accessible and informative way. Fascinating.

The Rota Mundi Tarot (Red Feather, £31.99) is an exceptionally produced edition accompanied by a book that is extremely informative and revelatory. I gave always been intrigued by the Jewish mystical speculation called Kabbalah (which means ‘to receive’ in Hebrew). For those interested in the history of the Rosicrucians this is a must. With essays on the Chymical Wedding of Christian Rosenkreutz, Alchemy, Kabbalah and finally the tarot itself this book makes many connections that serve as a chronicle to the development of thought that played a significant role in the establishment of science as a progressive means away from the enforcing hand of religion. We must not forget that Sir Isaac Newton held his most important work to be that which he devoted to Alchemy, yet up until now very few modern biographers of Newton have bothered to mention this important strand in his life, a scarlet thread that aided him in some of the most important scientific developments of all time.

Tweet
This entry was posted on 2 October, 2021 in homepage and tagged David Elkington. Bookmark the permalink.