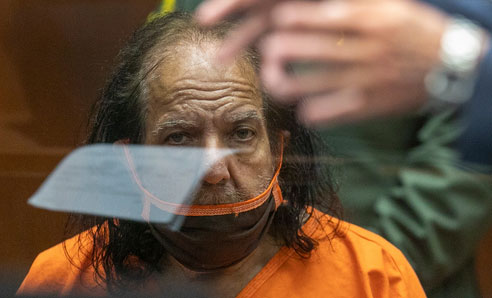 Ron Jeremy could now rot for the rest of his life;
Rotund, ruined. Founder of a luxurious legend, now
He will languish with a one handed refrain for all time.
The daily fuckings long done, as memory maps
Masturbation, and a morning glory comes after crying
Over spilt milk and semen and an ever widening chasm
That no fat man his age could now climb. His was a kid
In a sweetshop like life, despite bland beginnings;
Women at all corners and in all doorways, too. Tits
On tap. A celebrity carved from cock, with the ability
To come on a countdown, as well as enough girth
And inches to compensate for the features
That managed to evade beauty’s trap. Refered to
As a sweet guy by men but as a predator now
By women, perhaps decades in indulgence colluded
To corrupt true insight. For his was a transactional world.
Sex was currency. Women, likewise. And it would seem
That his lack of foundation in terms of wife and family
Smeared what’s right.  And so, he played a part
At all times; the funny fat clown, cool with fucking.
But as with kids and candy, the sugar you spend
Can soon crust; losing all sense and taste to create
Sick sensation, just as the bar broke beneath him,
To reform just as quickly in order to imprison
His crimes against trust. Though this is
A particular case. He’s been playing in porn since
The Eighties, if not before. Like the famous,
This must remove Ron from the real, hourly. And yet
What to do Ron, but time so as to listen too late
To friends’ warnings, as he wakes, wanks and whimpers,
The sex that surrounds him will be a matter
Of pricks pulled and pointing away from fame’s
Pleasure and straight towards infamy. What is Ron on?
A precipice, from this angle. And wherever a fouled
Fate now takes him, he learns the last lesson;
That loneliness and separation are porn for prisoners
At all moments, and always consuming. This is
Particularly true for the shameful, whether
Or not they are free.
David Erdos 15/8/22
.
Tweet

View all posts by David →
This entry was posted on 20 August, 2022 in homepage. Bookmark the permalink.