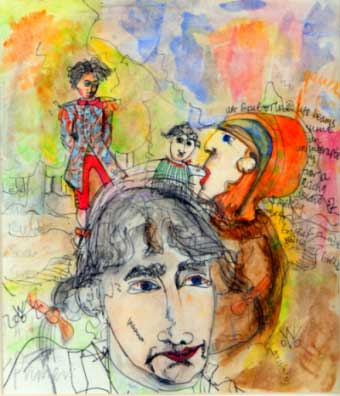 On the pavement walking wounded sufferers

and abuse. Look! We are drowning in the weight

of flat and unfermented, impotent words.

In need of the cutting syllable, the slash,

the slice, the scythe and slit. Wake up!

Feel this stabbing incisive thrust! We are

and colludes in curses that whisper from

The mystery of life occurs in comedy

and tragedy, in melody and silence,

in the pulsing throb of sex and anger, in

prayer, in meditation, in tenderness,

fart, a laugh, a mortal celebration that

Have you still time to dream with the dead? Let

the dead get down with the dead. Let them hip

academics who can speak five languages

and proclaim the cure to all society’s

ills but don’t know their clothes colours clash. Save

us from those racist thugs dealing drugs shipped

in from Afghanistan, China, Columbia.

Cry out for resolution, for exultation

and shit free revelation. Have we yet

forgotten the question? Listen! Who will

stand up with that weary silent majority

on the barricades? Who will mount the attack,

muster the vanguard. trample in the dirt

the gloss, cauterize with acid venom

the dross and triumphantly raise the

the passion, the boiling blood of an older,

Listen! Grasp it! The prefects from every

schoolyard conspire with the playground bullies

to intimidate and churn out their tight-

The broken age of prosodic reportage, the

Tweet
This entry was posted on 12 January, 2019 in homepage and tagged Mike Mcnamara, nick victor. Bookmark the permalink.

One Response to SAFE (A Restraining Order)