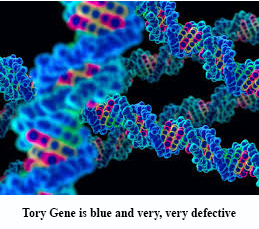 A team of scientists working in a genetic research laboratory in Blackpool are claiming to have isolated the defective gene responsible for determining right-wing political orientation calling it the ‘Tory Gene.’ The discovery has sparked a far-ranging debate as historically it was always thought that Tories (or anyone with right-wing beliefs) had been dropped on the head as a baby or abused by their parents or were doing it ‘on purpose’ to spite those around them. The results of the scientists have prompted the idea that, no matter how abhorrent Tories may seem to normal people, they cannot be blamed for their misanthropic, greedy, hypocritical, disingenuous, parasitical, obnoxious behaviour because these antisocial characteristics are due to their genetic makeup and specifically the presence of the Tory Gene.
.

Professor Mark Blowfelt, overseeing the scientist’s work was keen to explain his team’s findings, saying, ‘Of course were all suspicious of the Conservative gene pool from the beginning. Mainly because no one in their right mind would be a Tory, indicating other biological factors beyond their control. Now we have discovered the Tory Gene everything makes sense. Carriers of the defective gene are merely at the whim of this unbalanced DNA structure much like pedophiles,serial killers, merchant bankers and other psychopaths. This explains their political thinking in general and current policies such as; forcing terminal cancer patients to work, forcing doctors to work seven days a week, Trident, Micheal Gove and their constant need to be at war with as many countries as possible. It would also appear that some Tories have more than one of these troublesome little buggers running around inside them. For example Katie Hopkins’ legs and head are probably entirely made out of this substandard biological material.’

Do our genes tell us how to vote? Study of twins says they …
www.theguardian.com › Science › General election 2015

15 Apr 2015 – Findings indicate that voting Conservative (or not) is strongly influenced by genetics, whereas voting Lib Dem is affected by environment alone.

So, while the Right Wing Militaristic Law & Order Fetishists have Brains designed to be frightened and good at …

View all posts by Ethan →
This entry was posted on 22 October, 2015 in homepage and tagged current events, Ethan Harrison, politics, satire. Bookmark the permalink.