Sing a song of Simon As October 15th 2016 marked the 50th anniversary of the official launch of IT at the Roundhouse, so it also marked the emergence of my close friend Simon Anthony Cash. The result of a full day of labour, his birth began around the time that McCartney, Miles, Hoppy and all were applying their silken scarves and in some cases, ramshackle glamour to take on the Camden night. Further up the road, Simon’s mother, the actress, teacher and Grand-daughter of a former Mayor of Stepney, Susan Cash, was busily forming her own project, who’s own sartorial flair and refinement would encompass more than his fair share of glamour, foppery and general fol-de-rol. Although untouched by the rumblings of the Floyd, Simon’s belated embracing of the Beatles, after years of Mod-ery and flirtations with punk, has resulted in a state of affairs in which, should you have occasion to cut him open, you would find the words ‘Paul McCartney’ scored through him like the Brighton rock his beloved mods would once have munched. He is not so much a product of the counter culture as a result of the areas that it supports: fashion, lysergics, pop music in its purest form and a belief that somewhere in the society in which we inhabit, intelligence, common sense, informed questioning of the prevailing authority and dammit, decency must and should rise to the fore.

Like my other two almost brothers (Anthony and Ean), Simon is also the most generous and giving of people and the most encompassing of all of my friends. His time will be awarded to you at precisely the right moment. As a former Casanova of some standing, his understanding of the female mind is acute or goes as far as any man has the right or ability to reach and the subsequent wisdom comes to you sans hype, coloured only by balance and respect for the specific subject under concern or discussion. Indeed, his laid back, sometime joint infused stance is capable of resisting many of the pressures and neuroses most of us fall prey to. In this way he could perhaps be described as ‘health in repose’, one which arrives without any extra expenditure of effort. Indeed, while others run a mile, Simon gains his energy from watching his beloved cricket, football and cycling and no doubt his newly acquired vespa will serve to carry him around the provinces in the same way that his other model of style and musical achievement, Paul Weller, must have once surely cavorted.

Simon’s still slender frame (how many 50 year old men are able to  fit into the trousers they wore at 18!) resists all attempts at plastic renewal and his embracement of hedonism makes him a wonderous hybrid of both Jagger and Richards, facing the onset of aging with much of Mick’s sheen and all of Keith’s heady adoption of night. That alone is an inspiration, but the quiet power he asserts is also something that can be seen rippling through IT’s historical and current pages. We were and are still attempting to alter the balance and repaint the mirror that society stands before and while we as a paper, site and presence can attempt that, individuals like Simon can live or exemplify it, in an every day way and in terms of their own lives and independence. The demise of the Independent newspaper was something of a blow to my friend as regardless of content and style its whole stance and philosophy was close to his own, as IT’s is to all of its many contributors and handlers over the years.

Unlike mine and I suspect most of us, the moments of Simon’s own moral or personal buckling have been rare and manageable to the extent that any of these things are and in those cases he has been strongly supported by his devoted wife Cindy, son Jake, brother Pete, and vivacious parents Sue and Tony, not to mention his many friends, all of whom develop a soft spot for him, the hardening of which deepens no doubt through the years. It is this strength that again sisters that of what IT tries to represent and which makes Simon one of the many It-boys the last fifty years have given birth to, the pages of their stories rustling in the winds of history before being snagged on today’s framing tree.

My first foray into the dramatic world was with Simon – a school production of Fiddler on the Roof, no less, the figure of whom, without stretching the joke too far, always seemed to me to be a kind of anarchist, commenting on the foibles of those below while sending his thoughts to the air – and while I am younger than Simon, I was merely childishly wooing his female contemporaries while he was applying the real.

A sense of liberation has always been part of Simon’s character and this is what makes me ponder the connection between IT’s founding forces of cultural anarchy and the small scale equivalents as lived by certain individuals in the mainstream. IT’s strength was and is its usefulness as a mirror for a changing time. It offers responses, questions, actions and stances to be taken without a domineering didacticism, and hopefully allows for change, or the potential for change just as the seed on the wind begets the flower or weed in the pavement outside a hypocrite’s house. So, too does my friend in his gentle but persistent probing of bullshit and obfuscation as it is presented to us daily.

Whilst working as a Computer Trainer, actor (a current Malvolio in his Mother’s production of Twelfth Night for the Pinner Players) not to mention fondler of the jazz cigarette, Simon is not the modernist or former hippy compromised into wearing his Zara bought suit by changing times and declining values, but rather someone whose air of rebellion is stitched through every fibre of his neatly tailored threads. He is in that way a pure fruit from the poisoned tree and one who blossoms brightly in a dimly lit age, living as freely as anyone can in this malformed democracy, uninfluenced by the controlling forces without making any grand statements about it; and secure to the extent that any of us is or can be, about his position and place in the world. As a father he sets clear boundaries for his son and allows him to grow in his own way as his mother Cindy guides and supports him, just as Sue and Dad (and former Captain of Industry), Tony showed him and his brother Pete how to be. Simon has had many enviable experiences along the way, and while this is not the place to reveal them, I can assure you, The Libertine lives!

But there is no sensationalism here. Instead there is the understanding of what life is actually for and how it can be lived. All of our friends set examples for us and that is why we choose them. There are emotional, intellectual and physical attractions that bind people together. We look to share the limited air that life gives us with those who make it taste sweeter or more interesting. Whether its the slick vape assisted high of Simon chuckling in the corner of my mind or a glass of rum at 3am, he is a fine companion against both the sun and the rain.

In that regard, Simon has always struck me as someone who has truly known himself – which is surely anyone’s goal and perhaps the only real thing I can say about myself – and our friendship was re-ignited after twenty five years distance when moving back to the area in which I grew up after my Mother’s passing, and in which he and his family also returned to after Essex, Muswell Hill and Cuba, among other places. Since that time he and his beloveds have given me a place at their table, as indeed has IT and these happy synchronicities have allowed me to grasp both social and political standards that I can believe in at last and hang onto. That collision also inspires this short tribute to a person and to the idea or ideal that IT embodies.

On Friday the 14th October 2016, the current editorial board of the International Times met to decide to our continued direction and on Saturday the 15th as The Roundhouse launched their new website marking their fifty year history, of which IT played a huge part, I, along with Simon’s friends and family danced through the night into the start of our own new chapters. We went to bed at 6am, as the dawn began its slow infiltration of the sky and this blurring of one day into the next seemed fitting as it marked Simon’s own physical arrival and the sense that an isolated anniversary of this sort must now induce action on all levels. The song of becoming and of the human spirit of renewal and endeavour must now be sung if we are to breach the problems that face us in an age that is quickly shattering. If we and society ever needed a new glue, balm or paracetamol it is surely now. Let the music of recovery and change resume and play as loudly as the innovators and shamans of the 1960’s always intended it to. As the party plates must be cleared, so must the oncoming time.

I salute you all in the songs you must form. 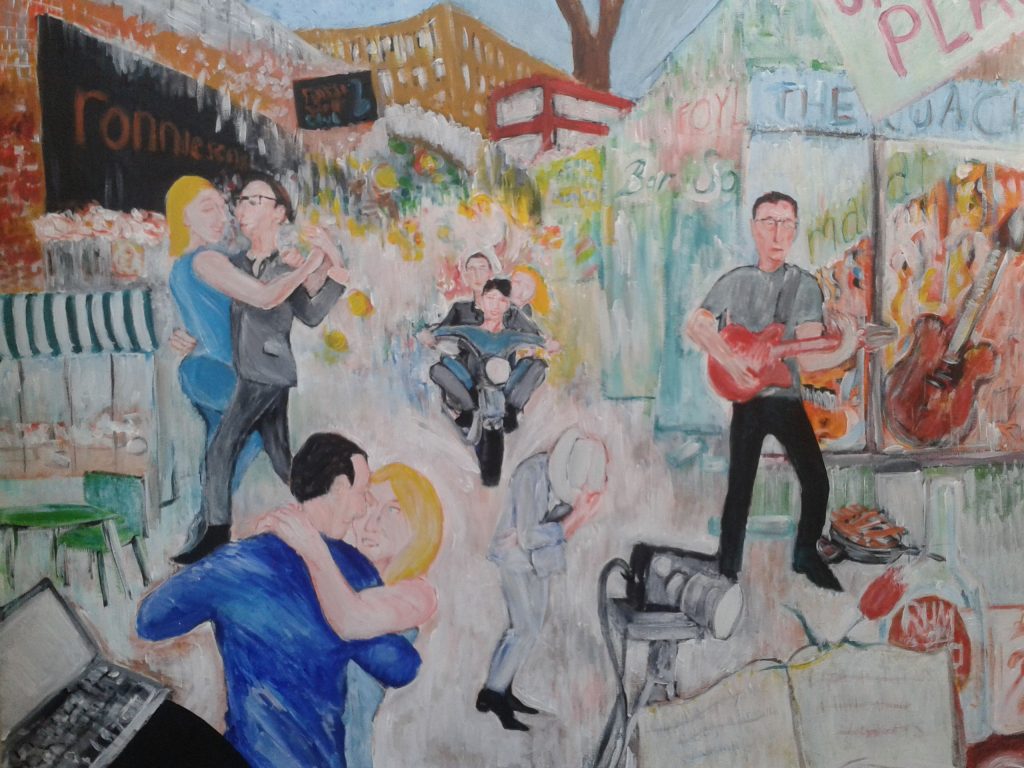 View all posts by David →
This entry was posted on 20 October, 2016 in homepage and tagged David Erdos, international times, SIMON CASH. Bookmark the permalink.

2 Responses to Sing a song of Simon