Posted on 8 December, 2016 by Rupert Loydell 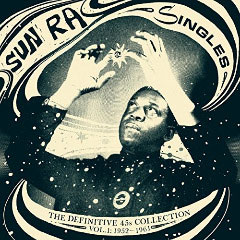 If you don’t know Sun Ra’s music, well you should. There’s bound to be something you like, and there’s more of his music available than ever. If you like big band jazz, he played it. Like freeform freakout? He played that too. Experimental soundscapes with synthesizers and percussion? Yup. Bebop? Small group jazz? Noisy wigouts? Science fiction apocalyptic soundtracks? Funk? Disco? Rock? Oh yes.

Over his long life, Sun Ra kept a core of musicians who lived in community together, practiced endlessly, gigged continuously, and also hand painted records sleeves for endless self-released LPs they could sell at gigs. (Their original Saturn releases are highly collectable and desirable; Saturn was also one of the first independent record companies!) They also had various major label deals that came and went, gigged with the likes of the MC5 in the 60s, got namechecked by Sonic Youth and other hipsters, faded in and out of fashion. Despite Sun Ra himself leaving Earth, there’s still a Sun Ra Arkestra performing today, with plenty of original members; and there are new anthologies, versions, missing and reissued albums around. This one included.

There has been a double CD of Sun Ra’s obscure singles before, simply called The Singles, but I think I’m right in saying it’s now out of print, along with all the other Evidence reissues from the 90s. This new Strut anthology is a triple CD however, with various overlaps and lots of new music. Here are doo-wop outings, short tight versions of Sun Ra classics, tracks where Sun Ra’s band back unknown or other vocalists, miniature experiments in sound, and some renamed album tracks… The set comes with voluminous and somewhat obsessive liner notes for those who enjoy such things, but I prefer to simply luxuriate in the sound and be transported where Sun Ra takes me.

This is an anthology that keeps listeners on its toes, it’s varied in genre, sound quality and musical ambition. Some tracks here are squibs, throwaways, paying gigs, others are vibrantly alive and surprising, showing Sun Ra at his best. Just when things are settling down along comes something different and surprising. Ra maintained he was born on Saturn and just visiting this planet and he and his band dressed in afro-futurist space robes and headresses for their gigs and publicity photos. Whether or not Ra believed his own pronouncements, or (as some critics suggest) it was better to be considered weird than be the subject of racial abuse, his mystical other-worldly obsessions thread its way through the music here. Rockets, extra-terrestrial beings and their messages for humanity, space mumbo-jumbo and visionary poems rub shoulders with the Batman and more earthly love and lust. It’s an exhilarating and exciting collection, and not a bad way to get an idea of the breadth and ambition of Sun Ra’s music. And if you don’t know Sun Ra’s music, well you should.

PS As well as the triple CD set, this is also being released in two triple vinyl editions and two box sets of ten vinyl 45s. Check out www.strut-records.com for details.