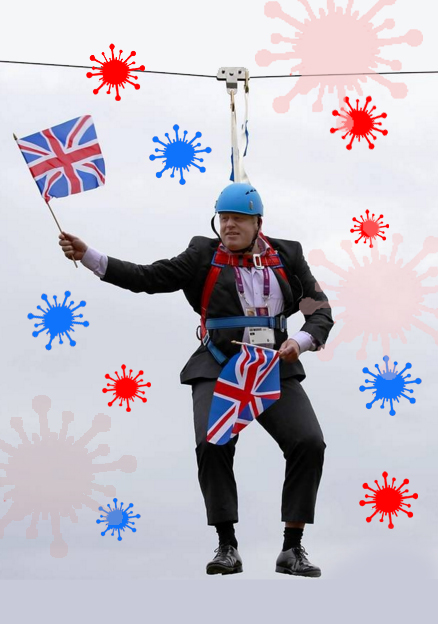 Contagion wants to shake your hand. Now you’re ‘it’

and you don’t even know it. When everyone else

could see it coming, the Prime Minister dismissed it.

With more time to prepare than most around the world,

he squandered it all, sleep-walking into disaster

then talk of ‘herd immunity’ and ‘losing loved ones

before their time’ as if sacrificing the sick

and vulnerable to a lottery of death

was a plan. Now the Government’s playing catch-up

to avoid a backlash as a silent wave of death

upon thousands more than the official figure

because if you weren’t tested you didn’t die of it.

The dead nurses, who worked 12-hour shifts, caught it

on their own time, not due to binbag PPE

after the hollowing out of the NHS.

You see, the Conservatives are super-spreaders

of lies. The problem is, they just don’t care. They read us

to see how normal human beings should react.

So take off your Brexit blinkers. COVID – the Tories

Mark Kirkbride is the author of two novels, Game Changers of the Apocalypse (a semi-finalist in the Kindle Book Awards 2019) and Satan’s Fan Club, both published by Omnium Gatherum. His short stories can be found in Under the Bed, Sci Phi Journal, Disclaimer Magazine, Flash Fiction Magazine and So It Goes: The Literary Journal of the Kurt Vonnegut Memorial Library. His poetry has appeared in the Big Issue, the Morning Star, the Mirror, Emergency Verse – Poetry in Defence of the Welfare State, The Robin Hood Book and Horror Writers Association chapbooks. https://markkirkbride.com/

Tweet
This entry was posted on 16 May, 2020 in homepage. Bookmark the permalink.