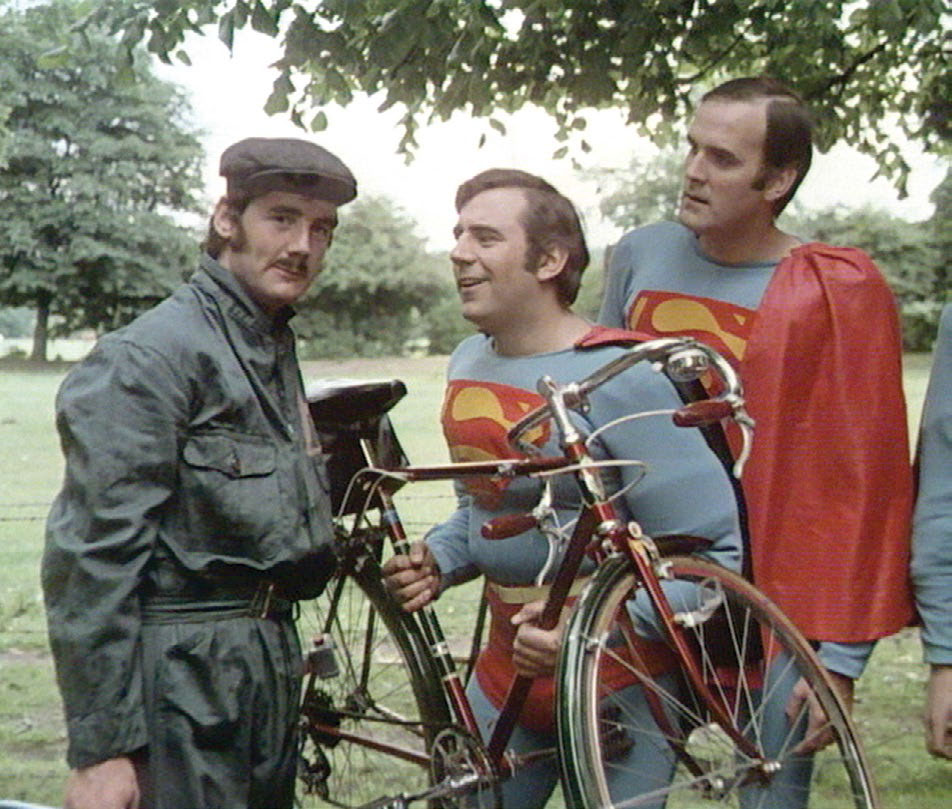 Bicycle Repair Man was the sketch for those
who still watch Monty Python. In which a world
Of Superheroes surrounded one noble serf
To the wheel. Which now spins for us all,
Somewhat creakily across landscape, only
This time with no fixer, and no Mechanic
Through which metals heal. So will it be
An enhanced world revving up in which a range
Of mutations remaster the human genome
And the aspect that traduces a gnome from Titans
Who towered before, regardless of height to source
Power from sense and sunlight that only memory
Can brighten. We will soon be the X-Men, X-They,
And naturally, the X-Women, replaced and reconstituted
Inside a battleground formed from fear.  I am personally
Pushing myself to the point of no return, or removal,
Despite itch or illness, pursuing the origin stories
That readers of the riot act, former rulebooks and fans
Of Marvel and DC stacked to hear. For this has been
A fantastical tale, and one so far without ending, in which
The laser eyes of Scott Summers have failed to revive
Poor Jean Grey, as we all phoenix now, risen and roused
From cast ashes, as well as subtly changed, charged,
Rewritten as each petty villain in scribbling secret code
Or verse has their say. What did Dominic Cummings
Actually want as he went, other than sour revenge
And our burning? And how does a twice divorced devil
Get married in a Catholic church anyway? Gove is found guilty.
Puffed, preened, those rounded cheeks make him droopy,
A cartoon dog from my childhood, despite his tightly clipped
Scottish brogue. So, what worth a worked contract now
As the contagion of corruption continues and the general good
Stays demoted so that we bare witness the rise of the witless
Private concerns of such rogues. It is Superheroes, though still,
And Super Villains, battling as buildings fall towards silence
Where once they did so for bombs. In this country at least,
While elsewhere the conflagrations are raging. But there will be
No edicts here to restrict them. There will be no prison sentence
Served. No Jail song. Not for Michael, or, Matt, or Dark Dom,
Or Bore-is, or for Unpriti whose ideas alone call for cells
To close in on a mind that would stain the walls placed around it,
And need more than Cyclops, or even Wolverine to scratch
And shift the bad smell of a fouled way, or plot, around which
We should remain vigilant, watchful. We were even given masks.
So, let’s use them to fight against the mutation of a different way
To die, a God spell, that has not come from God but perhaps
From those who’d control us, and who think of us as mere
Drawings, erased and recoloured by the shadows of doubt
They’d compose. Superheroes have dominated the screen now
For years, so now we must all become Michael Palin, who played
That repair man, finding fresh power in the flicker of a dream
Nightmares close.
David Erdos  June 12th 2021
Tweet

View all posts by David →
This entry was posted on 12 June, 2021 in homepage. Bookmark the permalink.