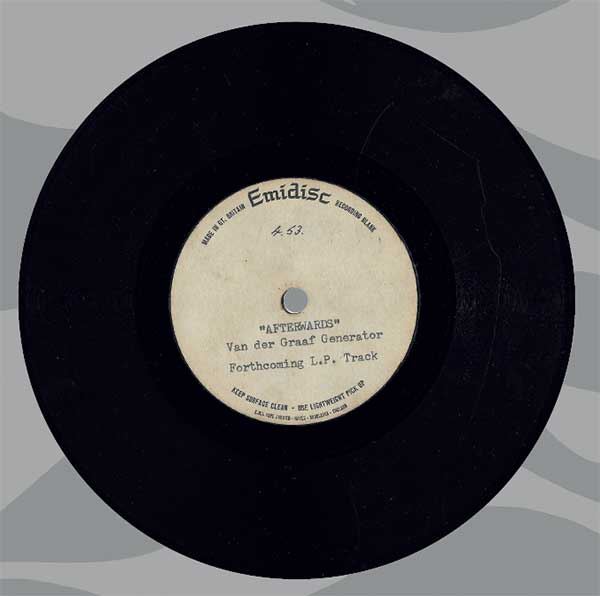 Let’s start in the middle with the original album’s title track, a 45sec ragtime ditty pretty much the requisite cute insert into an album of around this time. It is accompanied by a closing clip of ‘regional’ dialogue a la Ogden Nut Flake Small Faces, to namecheck the most obvious [there’s similar in The Who’s great Dogs song which I mention because it just spoke to me], and it’s a tangent from what is otherwise a platform for Peter Hammill on this debut album to sing songs in his distinctive variable sweet high register to harsh-operatic styles which I have always liked and still do, though preferring later full-band Van Der Graff Generator which this album isn’t though named so. The title track is followed immediately by a 90sec instrumental Black Smoke Yen which is piano and percussion syncopated to engaging effect.

I’m not a knowing fan of Van der Graff Generator and Peter Hammill, but I am a fan. I saw the band perhaps four times; certainly three: maybe the 16th January, 1971 at Colchester, Essex University, Dance Hall, because I used to go to many gigs there; definitely the 19th June, 1971, at Felixstowe, where they had – surprisingly – some great artists play and I remember this gig being far-out loud and full of colour; the 27th June, 1971, at the Reading Festival, and on the 29th August, 1971, at the Weeley Festival, Mersea Island, Clacton. There is a superb live recording of this latter from the band, one of the only from the festival – apart from a Pink Fairies which I have as an LP and is a pristine take of an unlistenable capture, and, of course, my own cassette recording of many of the artists who played 24/7 that weekend so were caught whenever I was awake and able, surprisingly good for the equipment and its age, including an emotive King Crimson where someone in the crowd has taken ill and the shouts from those around this person merge in the mellotron rise and crescendo of the band’s Cirkus.

There is characteristic emotion in the vocal and songwriting of Hammill on this album, opener Aftwerwards now a classic of his style solo and sometimes in the band, sweetly beautiful here rather than ‘harsh’. The accompanying original album notes with this anniversary edition explain the June ‘break-up’ of the band and how Hammill, initially planning to record as a solo project, recruited back members, and the recording was completed albeit with passages of gentleness, and penultimate track Octopus reflects the other end of the VdGG spectrum, also acknowledged in the rest of the quote as but mostly consisting of bare-your-tonsils-to-the-world music.

The second cd in this anniversary edition contains two previously unreleased demos of Sunshine and Firebrand as well as BBC session recordings from 1968. The quality of all of these is variable, though most quite good. The ’67 demos give a flavour of an emerging talent in the pop-psyche vein, and the BBC material is perhaps most notable for conveying the punch of the band’s later material and sound, not least the October ’68 recording of Octupus. Those looking for the fullest celebration of VdGG at this time will love the book for its photos and information as well as the facsimile gatefold LP with rare tracks, the whole collection as detailed in the following:

‘This deluxe set celebrates the 50th anniversary of the very first VAN DER GRAAF GENERATOR release and features the re-mastered album, an additional CD of rare & previously unreleased tracks including two previously unreleased demos from 1967, the complete BBC Radio Top Gear session from 1968 (including the “lost” previously unreleased version of ‘Octopus’) & the single tracks ‘People You Were Going To’ and ‘Firebrand’, a facsimile 180 gram vinyl LP of “The Aerosol Grey Machine” (cut at Abbey Road Studios) housed in the impossibly rare unreleased British gatefold sleeve design, a 7-inch single of the very rare withdrawn release ‘People You Were Going To’ b/w ‘Firebrand’, a lavish book with many previously unseen photos and cuttings and an essay by Sid Smith featuring an exclusive interview with Peter Hammill and a replica 1968 poster designed by Peter Hammill.’ 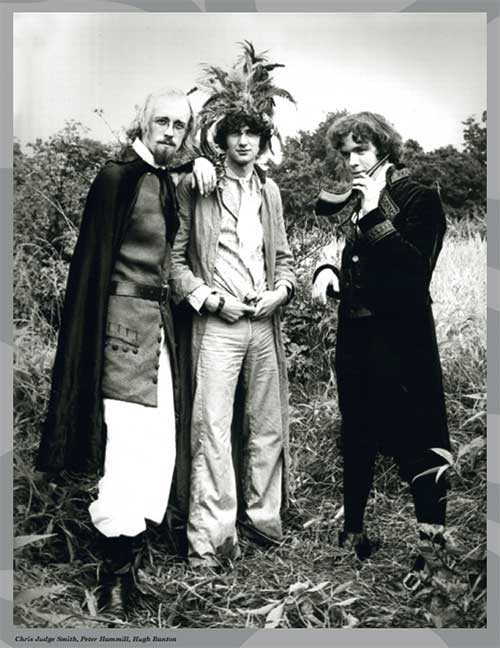