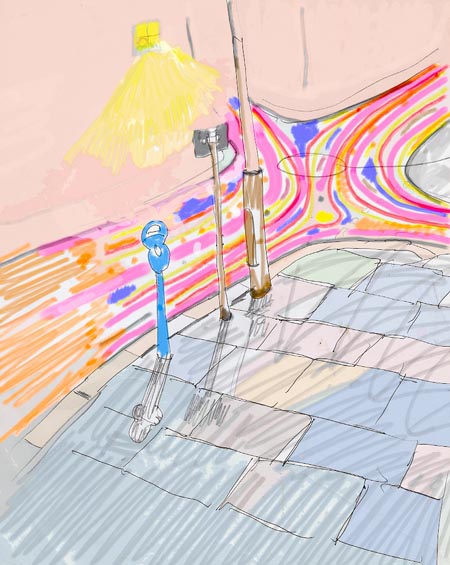 Yesterday I received a teary phone call from one of my closest friends. That evening we were meant to be catching an overnight bus up North for a five day getaway. For months we had been talking about the trip, yet when it came to it the trip never happened. Consumed by a combination of anxiety, stress and overriding exhaustion my friend could not handle the only holiday she had had all year. She had to pull out last minute. It was completely understandable, and feeling similar I was in ways relived.  A year previously another of my closest friends had a far more serious breakdown resulting from a mix of external pressures, overworking combined with the same anxiety, stress and exhaustion. He spent time in hospital, living in the countryside with his parents and in parts abroad to then return to the life he was living. Another close friend of mine was so worn down by her life that she was waking up every morning and vomiting before she went to work. It led her so far to the point of desperation, that in the end she left everything behind and flew to Central America and has never looked back. These are three inspiring people in their mid twenties who are bright, energetic and open minded yet who have all been led to mindsets that they should have. The thing all three had in common; The Big Smoke.

The majestic capital of England that floods itself with besotted tourists every day also draws in young professionals like the Death Star tractor beam. It has always been the norm laid out to us from an early age; the allure of the big city to find jobs and homes, success and happiness. The reality however is a little different. The society that we live in today presents this city as the pinnacle of working life and our every desire should be working towards our life there, complete with secure nine to five job and city apartment. It is the summit of Everest and we just need to reach out and touch it. Yet what is not mentioned, not drummed into us from an early age is the multitude of unwanted baggage and stress that it also brings. In the current society that we live, success and life achievements are judged by the status of your profession, the contacts and contracts that come with it and the salary you take home at the end of the week. We are pushed to push ourselves to our limit, to strive for more, to climb the ladder until it can be climbed no more. It is the accepted way of life, yet why has it come to this? Why is success accessed on these terms instead of one which provides a more fulfilling way of life? When jobs are being judged on money and titles should they not more be judged on enjoyment and happiness? It should be the smile you come home with, not the salary. Granted money plays a role in this, a secure pay check undoubtedly brings more comfort, but it should not be just that. Society pushes us to work towards something that is not happiness and yet we all accept it, the capitalist mainframe whirring along. As a result the pressures build up and up leading to the unfortunate circumstances that have engulfed friends of mine and countless others who have been sucked up by the city, and for what?

Much like the working life, the lifestyle of London is something that is always eulogised over too, the excitements and opportunities to city life.. Undoubtedly it has its many plus points, a home of culture and possibilities. Every evening shows, gigs, exhibitions and more are open and waiting with open doors. However more often than not they remain far less crowded than the bar across the road, which offers nothing more than over priced drinks and the chance of fumbled romance. It is like wandering through the pages of Bright Lights, Big City and American Psycho with Nathan Barley jumping in from time to time. In so many cases the weekends become a launch pad of excess, crawling from bar to bar to consume as much as possible before often regretting it the next day over a greasy brunch, half heartedly talking about the night that you hardly remember. Then you head home on the tube, the underground of silence, to sleep it off. Before you know it the weekend is done and you are back fighting deadlines and pressures craving the next weekend to repeat it all again. By the end of the month funds have dried up and you are sitting in your extortionately priced apartment hoping your cereal will last to the end of the week. The cycle spins. In the last month I have offered loans to two friends who were running a bit short on cash. They have spent the whole year working really hard, pushing themselves constantly through demanding jobs whilst I spent two months in a summer school, half the year working in a non-profit in Guatemala, surfing twice a day, with a salary ranging from nothing to $125 a month and otherwise travelling. It should not be this way round.

Obviously everyone has different tastes, the possibilities of the city bringing wealth and joy to many yet it is not as common as society leads us to believe; the donkey always chasing the carrot on a stick. There is another life out there, it is just not the societal norm and thus we are often dispelled from it. After reading Alan Johnson’s This Boy recently, an autobiographical account of his childhood in London I was struck by one moment. One morning Lily, his mother, eyes a poster offering a route to Australia for an affordable price to forge a new life. Despite living in abject poverty, in destitute housing conditions they quickly dismiss the idea as their London roots lie so strong. It is interesting in two ways. One, the understandable argument many put up; that this is their home and they would not want to leave their families and friends behind. The other, more defining idea is that this was an option to Johnsons’ family, despite the fact they had next to nothing. A counter culture life is so available, so accessible yet people often will not want to realise it. People put it down to money and contracts tying them down, but in reality this is not the case. It is the culture, it is the societal pressures and the expectation of what we are meant to do with our life that makes us stay. By escaping to work in the mountains, on a beach or even in another European city is not the life we were told we should lead, and thus we think we cannot live it. By accepting the job on a beach we are not pushing ourselves to our full potential, we are hoping ship, copping out, so we reject it and carry on, our Inside Out Joy falls to the floor in resignation. So we carry on accepting this road, despite stimulating, alternative jobs lying on every internet tab, it is hard to really commit, knowing the “25 year old bum” tag that come alone with it. It is almost a battle to be happy, knowing what will make you happy but feeling guilty about taking it. Is that what it comes to; knowing happiness is there but afraid to take it because of expectation, because of pressures that do not bring the happiness they tell us they will. It’s a dangerous cycle, yet the bike keeps rolling down the hill. I mean I did see an advertising job going in Elephant & Castle that looked alright…