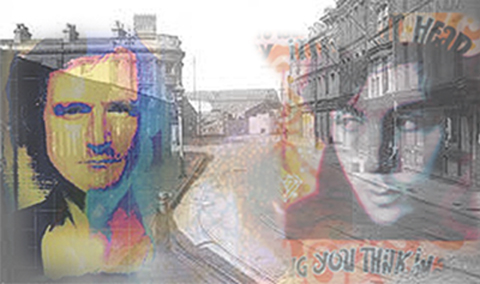 pulsing
under jade sky
planets swarm through the
arches of Stoneferry bridge,
eyes nictating in a frost
of asteroids and tides
of delicious terror

“hey !!!”,
Transit van docking manoeuvre’s
through persistent lime parallels
at the road margin, asking
“which way to
the skyline…?”

“through the bridge,
down past the lights,
‘Skyline Ballroom’,
first on the right”

tie-die spirals ripple on van walls
‘PINK FLOYD’, vibrating day-glo,
‘SAUCER FULL OF SECRETS’, and Syd’s
head retracts, curls dripping pulsars
into the gutter where they squirm
and devour each other

I shock awake,
but too late

Transit recedes
under jade sky
strobing through
arches towards
the skyline…

and I almost met
Syd Barrett

(This story is true. But it was written from memory, some time after the event. Subsequently I’ve managed to trace the exact date it happened to Thursday, 28th September 1967 when the Pink Floyd played ‘The Skyline Ballroom’ in Hull, and I was in town for college. I used the comprehensive Floyd chronology appendix to ‘Madcap’ by Tim Willis to do this –  www.theshortbookco.com, my only qualification now is that it might not have been a Transit van, it might have been in the days before Transits were generally available for bands to use, possibly it was a Thames van…?)